Obscurity of the Day: Cooper 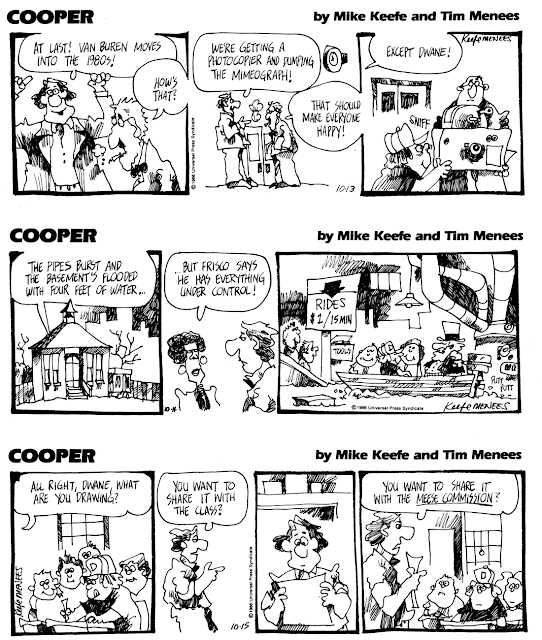 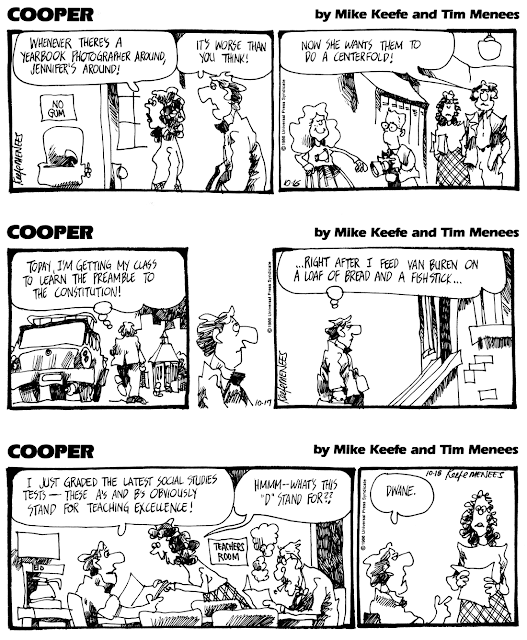 As I've mentioned many times here on the blog, the 1980s was a decade in which seemingly every editorial cartoonist had to try out his or her luck on a comic strip, and all the syndicates seemed eager to give them a go. With Cooper we get two editorialists for the price of one.

Mike Keefe of the Denver Post and Tim Menees of the Pittsburgh Post-Gazette met in 1978 and started talking about collaborating on a strip, but it took until 1985 for the team to settle on an idea and get it accepted by a syndicate. The idea that got Universal Press Syndicate on the hook was Cooper, which focused on the teaching staff at a suburban high school. Cooper himself is a youngish teacher, still somewhat idealistic but also starting to question the wisdom of his career choice; he's accompanied by an assortment of other teachers, a sunny young female principal, and the school's biggest behavior problem, a kid named Dwane.

As with most strips that seek to appeal to a particular demographic, as Cooper undeniably did, it probably would have delighted its intended audience, but failed to impress newspaper editors. If I was one of those editors, I imagine I would have figured that teachers are probably already buying my paper, so do I really need a comic strip to pull them in? While the creators claimed to have a decent list of about 50 papers for Cooper, the short run -- March 18 1985 to January 3 1987 -- would seem to indicate that those clients weren't sticking with the strip, and new clients weren't being added.

In my book I stated that Menees handled the art and Keefe the writing. Articles about the strip that I read in preparation for this post show that I had that wrong. In Cartoonist Profiles #69, the creators say that they both wrote gags, and Menees did layout art and lettering, while Keefe inked the strip.

When Cooper ended Menees and Keefe evidently hadn't had enough of the comic strip world. Less than a year later, they returned with another strip, Iota, another short-run obscurity that we'll cover here one of these days.

Comments:
The lettering reminds me a great deal of Russell Myers' Broom-Hilda.

Meanwhile, I have been trying to find samples of David Brown's "Today's World" panel on Newspaper Archive, with no success.

If only it didn't have such a generic title...

Keep up the good work.

Reading the Gumps ..... just finished some Out Our Way and a cartoon compilation from England - The Oldies magazine.....didn't understand about a third of it.
aloha,
joe t.

The Cincinnati Post picked up Cooper on March 3, 1986 (the day they added Calvin and Hobbes).