Obscurity of the Day: Colonel Corn 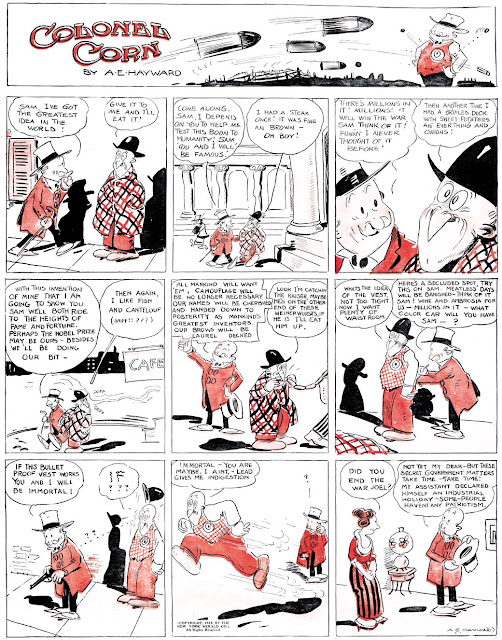 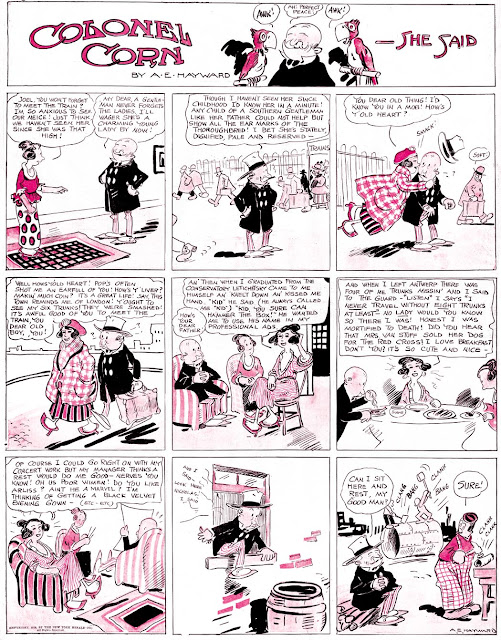 Before A.E. Hayward settled down into his long-running comic strip Somebody's Stenog, which began in 1918, he popped up at several syndicates with good strips. Here we have Colonel Corn, which he produced for the New York Herald syndicate from October 24 1915 to November 3 1918.

Although mostly forgotten today, as you plainly can see above Hayward was one helluva cartoonist. I love his wispy, sketchy lines, full of fun and vigor, and his snappy dialogue is like listening to a jazzy song emanating from the printed page. Hayward had a habit of writing so many long dialogue balloons in his strips that he didn't have much room left for the drawings. But when the writing is of this caliber, who are we to complain?

The late Cole Johnson was probably Hayward's biggest fan, and definitely the most knowledgeable about him, so I greatly regret that I never twisted his arm long and hard enough to have him write an appreciation of this great cartoonist.

Comments:
Hello Allan-
Yes, Cole was quite a fan, In fact he had acquired a rare photo of Mr. Hayward which still hangs on my wall. Alfred E. Hayward was an accomplished artist in several mediums, as a painter he won the Dana watercolor award and as a cartoonist, in addition to his print career, he taught caricature at the Pennsylvania Academy of fine arts. Cole searched for any of his paintings, but outside of a terribly indistinct newspaper photo, never could find one, maybe they no longer exist. Tempus fugit.