Obscurity of the Day: Gallant Cholly 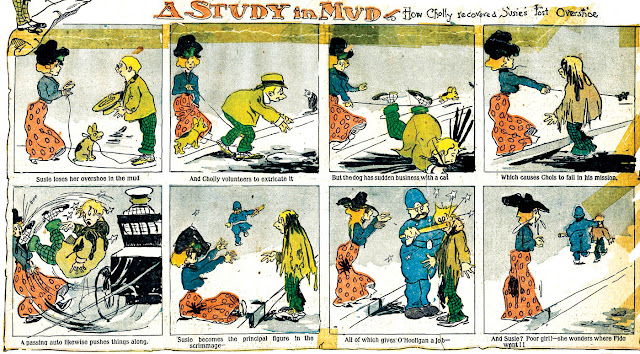 Clare Victor "Dwig" Dwiggins' comic strip career began in earnest in 1900 at the Philadelphia Inquirer, where he created a number of features for their recently born color comic section. One of the longer lasting was Gallant Cholly (or often just Cholly), in which our hapless hero tries to impress a young lovely with his chivalry, only to be rebuffed, and often beat up, arrested, or both, for his trouble. Dwig's great facility with slapstick made the strip, I imagine, work of very little effort for him.

Gallant Cholly ran from March 17 to November 17 1901. The above sample, which is from the collection of Cole Johnson, was the last installment of the series. Sorry about the condition, but this is the sort of thing you must occasionally expect for such rare early material.

After his stint at the Inquirer, Dwig switched most of his attention to book illustration and postcard work, and didn't return full time to newspaper strips for close to a decade.

PS: won't someone please fix Wikipedia and Lambiek's lame Dwig entries, both of which make the ridiculous statement that his first comic strip was School Days? Sheesh!

Comments:
I think someone already fixed the articles:
Wikipedia: "Dwig's first comic strip was Tom Sawyer and Huck Finn (1918), which used more than a half dozen of Mark Twain's characters but employed very little content from his novels." (researched 12/10/2015)
Lambiek Comiclopedia: "Dwig's first actual comic was 'Huckleberry Finn', based on the book by Mark Twain, in 1918." (id.)