Obscurity of the Day: Mrs. Trubble 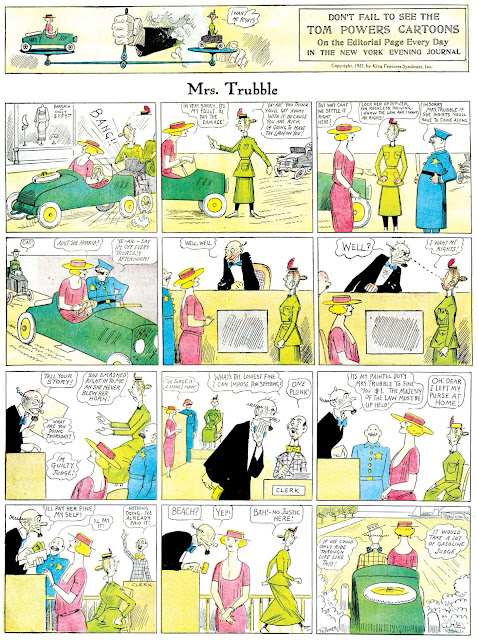 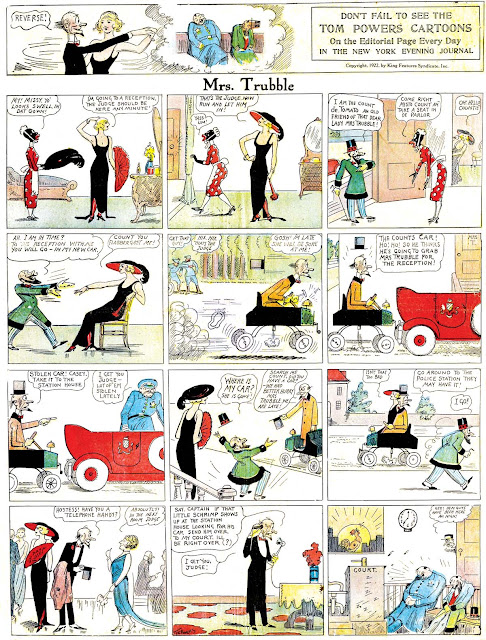 T.E. Powers was one of the mainstays in the Hearst bullpen in the first quarter of the 20th century. His weekday cartoons, which graced the New York Evening Journal from 1903 until at least 1924, was one of those untitled affairs that had about a bajillion different running subtitles during its long life.

One of Powers' continuing series concerned a beautiful and sophisticated widow named Mrs. Trubble. Powers couldn't really draw attractive women all that convincingly, so you'll have to take my word for it that Mrs. Trubble was supposed to be quite the bit of eye candy.

In the weekday cartoons her role was generally to show how men react very differently to the gorgeous Mrs. Trubble compared to their wives. The typical cartoon has a wife begging her husband to take her out to dinner, say, and him spurning her. Then Mrs. Trubble arrives and suggests they all go out to dinner, and hubby all of a sudden thinks its the grandest idea in the world. This sort of scenario was played out in dozens, maybe hundreds, of different ways over the years.

In 1922 when the New York Journal's Sunday section expanded, Powers was put on the hook to fill up a page. From among his many characters and series, Powers chose Mrs. Trubble to get the color treatment. In the Sunday version, Mrs. Trubble was given a couple of steady suitors, as you can see above, but the plot pretty much remained the same -- men will consistently make asses out of themselves around a curvaceous belle like Mrs. Trubble. The series lasted from March 18 to December 2 1922.

Samples above courtesy of Cole Johnson.