Obscurity of the Day: Wojo and Penelope

After a successful career in the music store business, Sharon Awrey decided she'd like to write for kids, and she chose newspapers as her outlet and self-syndication as her method. She is credited in her 2003 obituary with three series; Wojo and Penelope, Pling and Time Out for Kids Ages 5-105. Time Out for Kids (see below) is primarily text and photos, and seems to have been by far her longest-running feature. 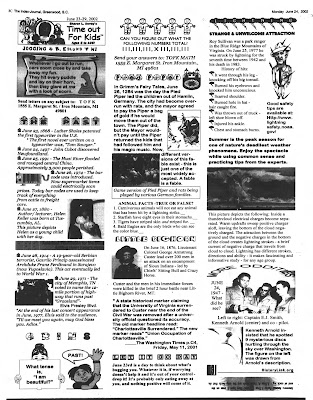 On the other hand, I haven't yet come across any papers that ran Pling. It apparently ran in the Iron Mountain (MI) News, but I haven't found a way to access that paper's archives online.

What I do have access to is Wojo and Penelope, which was a daily comic strip about a group of kids, and featured simple gags that would primarily appeal to the under-10 year old crowd. Awrey enlisted the aid of veteran artist Harold Elder, who was nearing the 70-year mark, to draw the strip in a simple and accessible style.

Based on my files, the strip ran in the Milwaukee Sentinel from December 16 1982 until at least July 1983. However, an introductory story about the strip in the Sentinel claimed that it started a month earlier in the Iron Mountain News, so figure sometime in November 1982 as being the official start date.

I imagine that Awrey's connections in Michigan, and Harold Elder's connections at newspapers in the Milwaukee / Green Bay area, were instrumental at getting the strip in the papers it did. They evidently weren't enough to make the strip a paying proposition, though. If anyone has information on the end date of Wojo and Penelope, or hard evidence of Pling appearing in newspapers, do please let me know!