Obscurity of the Day: Dinah Says 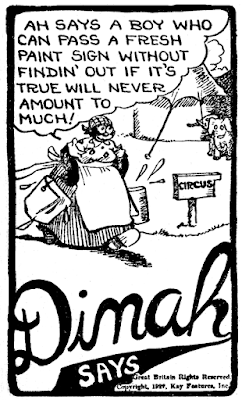 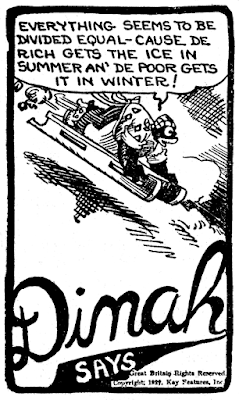 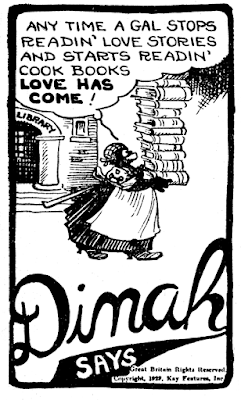 From Moses Koenigsberg's unsuccessful syndicate, Kay Features, we have today Dinah Says, another of his rather well-done features that, for unknown reasons, just couldn't seem to attract clients. Say what you will about Dinah Says' racist caricature of a black mammy, this characters's daily homilies were quite thoughtful, pithy and droll, as compared to the churned-out infinitely recycled material we see from many of the other similar features (Abe Martin, Ching Chow, etc.).

Dinah Says seems to have run from sometime in 1929 until sometime in 1931, and I have yet to find a paper that ran it consistently enough to give any more exact information than that. It was advertised in a Kay Features promo ad in E&P on April 20 1929 and a copyright entry was filed for the March 4 1929 episode, so presumably the start date is sometime around or before then.

Dinah Says was never signed or otherwise attributed that I know of. As usual for me, the style looks vaguely familiar but otherwise I'm pretty much at a loss, except that Ferd Johnson popped into my head as a possibility. Any other ideas out there?