Obscurity of the Day: Girligags 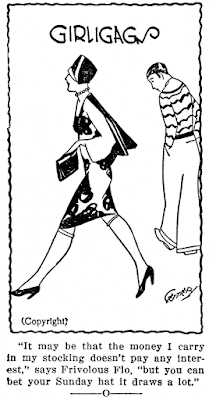 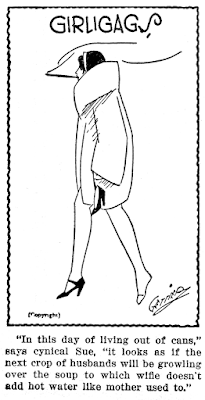 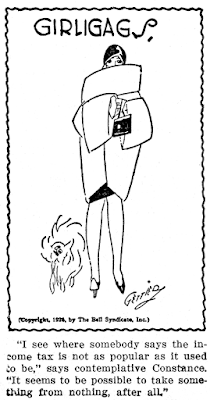 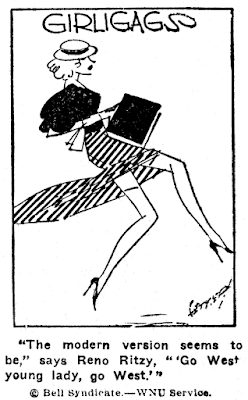 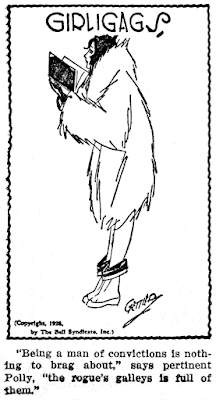 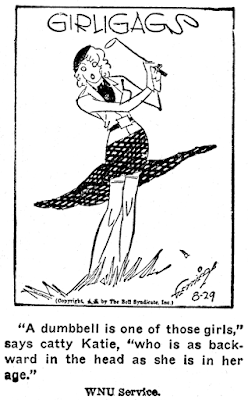 From Sue to Lou, the weekly comic strip that featured stylish pretty girls, got a sort of a daily cheesecake supplement in September 1924*, when creator Clarence Gettier added Girligags to his repertoire. Although Girligags is set up like a lot of the 1920s 1-column flapper panels that were all the rage (Flapper Fanny, Flapper Filosofy, Oh Margy, The Boy Friend, Girliettes, etc.), it's no tired knock-off. Girligags might well have been the first of the breed, with most of the others debuting in the latter half of the Roaring Twenties.

Gettier's captions are of a singular sort, with the illustrated beauty always being named as part of the gag-line. The other unusual aspect of Girligags is that the drawings and the captions rarely have anything more than a glancing relation to each other. I suspect that this is because Gettier recycled artwork, but I must confess to being too lazy to put my theory to the test with a research project to find out for sure. Not that it would be the worst task in the world, because I quite enjoy taking in Gettier's leggy babes.

The panel was syndicated by Bell Syndicate to a relatively small client list. I'm not sure why Girligags never caught in a bigger way, but it evidently did well enough for Gettier's and Bell's taste; the feature lasted until March 18 1939, a very fine long run by anyone's standards, especially when you consider that it weathered all the worst years of the Great Depression in the process.

Actually, I do have one idea why Girligags lasted so long despite a dearth of clients. As early as 1926, Bell began to resell the backstock of the panels to Western Newspaper Union, which redistributed Girligags to its huge client list of rural papers. While you might not think that cartoons of winsome flappers showing off their stocking tops would go over all that well in the sticks, evidently you're wrong, because WNU resold Girligags for years and years, and those hayseed papers ran the cartoons by the droves ---  especially, I might add, showing a preference for the examples that had the gals showing off the most skin.

* date based on a note in Dave Strickler's Syndicated Comic Strips & Creators; earliest I've seen is in October 1924.