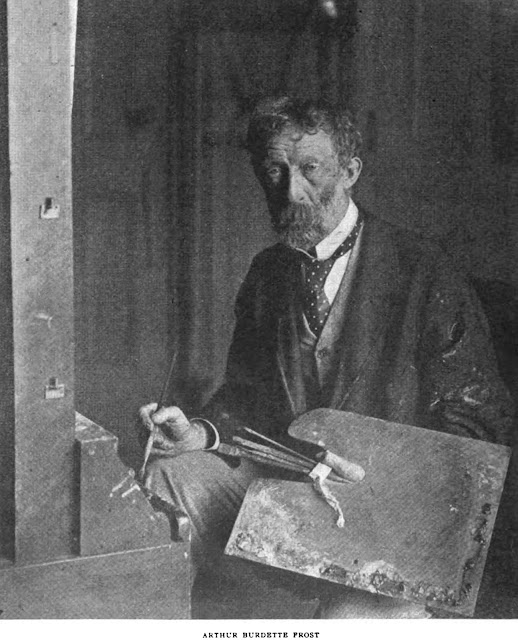 The family tree said John Frost was born May 14, 1890, in Philadelphia. Something About the Author said Frost moved, in 1890, to “Moneysunk” farm in New Jersey, and the following year became a pupil of impressionist painter, William Merritt Chase.

Another collection of Frost’s drawings, The Bull Calf and Other Tales, was published by Scribner’s in 1892.

Frost endorsed Higgins drawing inks in advertisements which appeared in numerous publications including the Journal of the Franklin Institute, January 1893 (below), and Pratt Institute Monthly, March 1898. 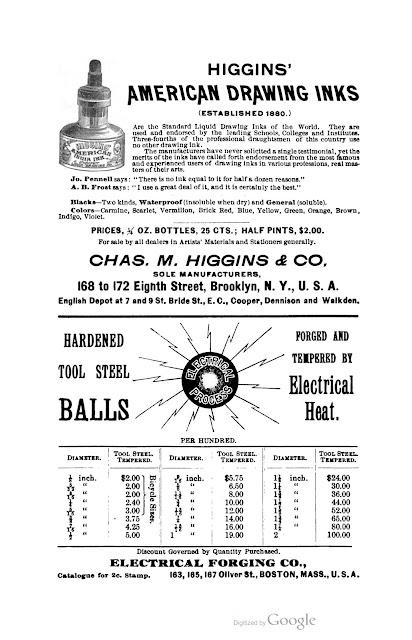 Frost was profiled in the Book Buyer, March 1894, which was reprinted in Suppressed Chapters and Other Bookishness (1895). A photograph of Frost’s studio in Convent Station, New Jersey, was from the Scribner’s book, American Illustrators (1892). The profile referred to his home “on top of a hill near Madison, New Jersey, where ‘sceneries’ are a good crop, raised on a farm of about one hundred and forty acres, with a house in the middle of it that has big pillars along the front.” 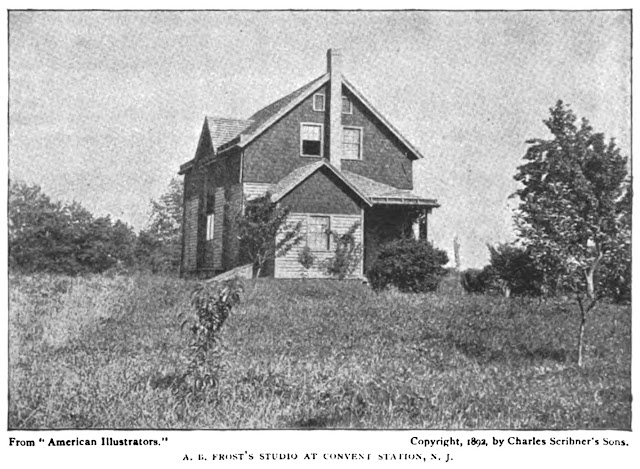 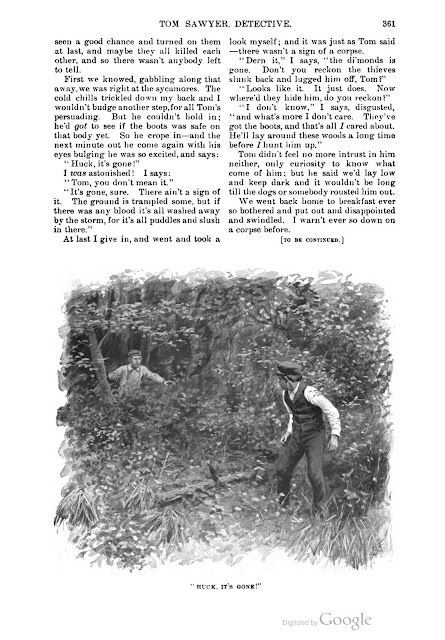 A letter in Mark Twain’s Correspondence with Henry Huttleston Rogers, 1893–1909 (1969) said Twain wanted Frost to contribute to his new book:


I suppose A B Frost is an expensive artist; but if he is not too expensive it might be well to get him to make 3 or 4 full-page humorous pictures. He is the best humorous artist that I know of, and he might not be difficult to deal with for the reason that he told me 3 years ago that had long had an ambition to make some illustrations for me.

Frost was one of eleven illustrators in Twain’s Following the Equator: A Journey Around the World (1898).

Another profile of Frost appeared in Literature, June 9, 1899, which included a history of the Frost family. Parts of this profile was used in the aforementioned books, National Cyclopaedia of American Biography and Frost Genealogy in Five Families. Other aspects of Frost were in the following passages:


Frost is truly an out-of-doors man; most of his work shows it, but an acquaintance with him will show it more strongly still. Early in life he was a practised oarsman and a prominent member of a boat club on the Schuylkill. He is a sportsman, and has hunted game, big and little, in almost every region which he has depicted in his illustrations of sporting scenes. He is an enthusiastic student of natural history, and when out with his gun he not only brings down his bird with that certain aim for which he has become famous in gun clubs, but he can tell you the genus and variety of that bird, its habits and habitat, the period in which it is allowable to shoot it, and, if you wish further details, will refer you to the page of an ornithological volume in which you can find all you desire.With his two young boys, almost as enthusiastic in the study of nature as is their father, he will spend hours in forcing the streams and ponds in his neighborhood to give up their secrets in the way of fish, newts, and other small denizens of the reeds and water, and from his spoils the most interesting will be carried away to become inhabitants of his aquarium. Nothing in nature escapes him, animate or or inanimate; he perceives the individual characteristics of a tree as he perceives those of a man, and is familiar with the plants of wood and field. He is fond of mushrooms, and can tell you all about them, excepting what medicine to take if you have eaten the wrong ones.

Our artist is a wheelman and an earnest golfer, and I think there are few persons who can extract a greater variety of pleasure from the grassy links than he. Good strokes and bad strokes, whether made by himself or anybody else, appeal with almost equal force to his admiration or his perception of fun. It is one of his most prominent characteristics that he is as able and willing to see and make use of the comical points in what he does himself as he is to seize upon them in the performances of others.

Besides being a sportsman and a golfer, and a genial student of natural history, Mr. Frost is a farmer, and his broad acres spread far and away around his stately mansion. Here nature is kind to him, for his fields yield him much more than they would to an ordinary farmer; they give him good crops of hay, corn, and grain, but, in addition to all this, they are the source of inexhaustible crops of fun.

The 1900 census said the Frost’s address was 62 Treadwell Place in Chatham. Drawings by A.B. Frost was published in 1904. 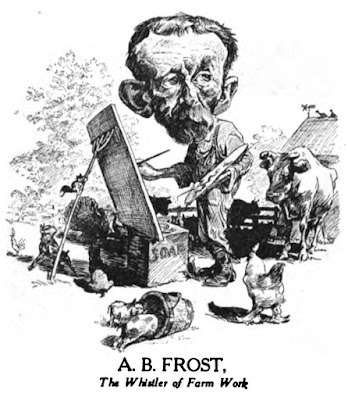 Frost received his passport on June 21, 1906. He was described as six feet, one-and-a-half inches, with blue-gray eyes and gray hair plus beard and mustache. He was an artist who intended to return in two years. Accompanying him were his wife and two sons. A passenger list recorded Frost’s return on May 25, 1914. His ship departed from Cherbourg, France.

While Frost was in Europe, his book, Carlo, was published in 1913 by Doubleday, Page and Company who advertised the book in many periodicals such as Country Life in America and the Garden Magazine. Carlo was serialized in newspapers. (Lambiek Comiclopedia said Frost’s work never appeared in newspapers. The New York Sun published Frost’s “The Suicide” here.) American Newspaper Comics (2012) said Carlo ran from January 4 to March 8, 1914. The New York Sun published The Adventures of Carlo from January 4 to February 22. 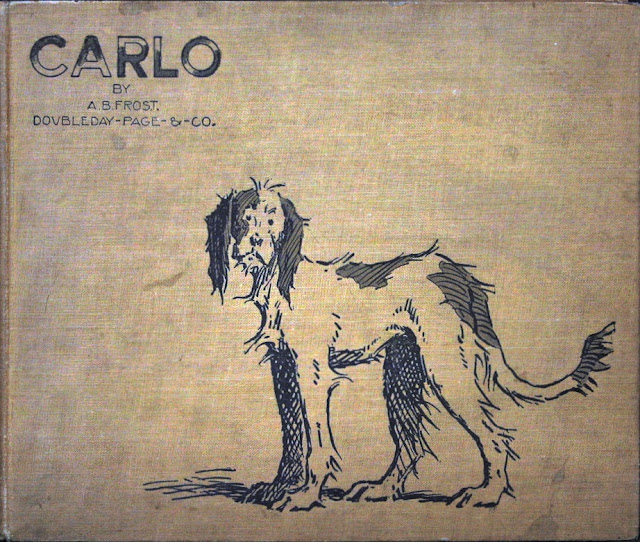 The 1919 Morristown city directory said Frost’s address was 60 Maple Avenue. Something About the Author said Frost moved to California in December 1919.

The 1920 census recorded Frost in San Gorgonio Township, Riverside County, California. The occupation of Frost and his son, John, was artist.

Pasadena, California city directories for the years 1921 and 1924 to 1928 said Frost’s address was 529 South Madison Avenue.

Frost passed away June 22, 1928, in Pasadena, which was reported by the New York Times on the 24th and said in part:


Arthur Burdett Frost before the World War was one of the best known illustrators in the country. He specialized in humorous drawings, generally of homely farm and country types and of animals. He is best remembered now as the illustrator of “Tom Sawyer,” “Uncle Remus” and the “Mr. Dooley” books, as well as books he himself wrote, among them “Golfers’ Alphabet,” “Stuff and Nonsense” and “Bull Calf and Other Tales.”


Few men who have excelled in his field have had a wider vogue, and not many could compete with him in the good-natured humor which infused the greater part of his work. It was Frost who helped to visualize the characters of Mark Twain, Joel Chandler Harris and many other popular American writers. He will be particularly remembered for the way in which he pictured Tom Sawyer, Uncle Remus and Mr. Dooley. Under the magic of his pencil they became realities and lived and had their being. One of the books he illustrated with great success was Max Adder’s “Out of the Hurly Burly.” Here was an instance where author, artist and subject were in happiest accord. He knew how to draw, but he also understood the value of exaggeration; and, as has been well said, “had the faculty of bringing an air of reality into the realm of the ridiculous.”

Arthur Burdett Frost studied at the Philadelphia Academy of the Fine Arts under that, great instructor, Thomas Eakins, which is a proof that, he took his art seriously. The New York World in a tribute to his memory says that, when we pass from much of the modern day output to that of Frost we have much of the sensation of “coming out of a cheap cabaret into a delightful performance of Gilbert and Sullivan.”

The Times said Frost’s wife, Emily, passed away December 27, 1928 at her home in Pasadena. Frost’s artistic son, John passed away June 5, 1937, in Pasadena, according to the California Death Index, but the family tree said it was June 7. He was buried in Laurel Hill Cemetery.

Some of Frost’s artwork can be viewed at the North Jersey History & Genealogy Center Digital Collections and a list of books illustrated by Frost are at the Online Books Page. Thornton Oakley wrote about meeting Frost in the Pennsylvania Magazine of History and Biography, January 1947. The A.B. Frost Book by Henry M. Reed is available in two editions from 1967 and 1993.