Obscurity of the Day: Carlo 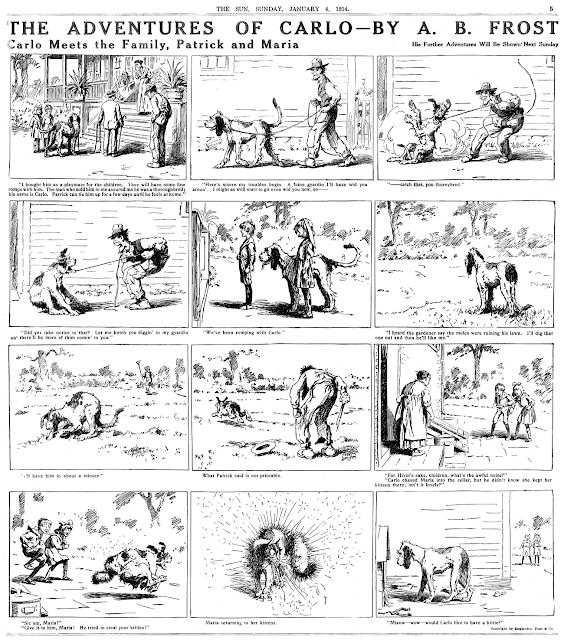 Even though he is credited as an important popularizer of the comic strip form in America, famed illustrator A.B. Frost was content with book and magazine work, and seemed to have no interest in bringing his gifts to the newspaper realm. While most of his illustrating brethren took a whack at newspaper illustration and cartooning, and quite a few refocused their careers there, Frost stayed above the fray.

Even though Frost's Carlo comic strip series ran in newspapers, it can truthfully be said that Frost never did a newspaper series. That's because the newspaper Carlo series is merely a reprinting of the contents of a book.

In 1913, Frost's book Carlo was published by Doubleday, Page & Co. It was the first book of cartoons that he had produced in many years, and despite a marketing push timed for Christmas gift-giving, the book's sales were disappointing. Perhaps after such a long time out of the public eye Frost's name no longer had the winning credentials it did back in the 1880s and 90s.

Doubleday may have seen the writing on the wall, because in an astoundingly craven move, they were peddling the contents of the book to newspapers at the same time, for publication beginning in January. I can only imagine the consternation of those who bought the book, or gave one for Christmas, only to find its contents given away in their Sunday papers weeks later.

Most papers began printing the full-page series on January 4 1914, and some finished on February 22 with a half-pager, while others ended on March 8. Unfortunately I have not been able to do an exhaustive comparison to see why that is. I suspect that some papers may have omitted an episode, or printed two half-page installments as single full-pagers. In any case, it appears that the newspaper series encompassed nearly if not the whole book. The Louisville Courier-Journal, for instance, ran a total of 90 panels out of a total possible 104.

Th Carlo comic strip was superbly done, full of Frost's expressive personalities and panel design, and the dog was a great character. It was a delightful newspaper series, so it's a shame it happened for all the wrong reasons. Still, if it exposed a new generation to Frost's work, I suppose it wasn't a total loss. It certainly seems to have inspired a fellow named Clifford McBride, who was 13 years old at the time. I can't imagine that Frost's Carlo was not an important inspiration to McBride, who would create the characters of Napoleon and Uncle Elby in the 1920s. The two dogs have a  resemblance in both looks and personality that cannot possibly be a coincidence.