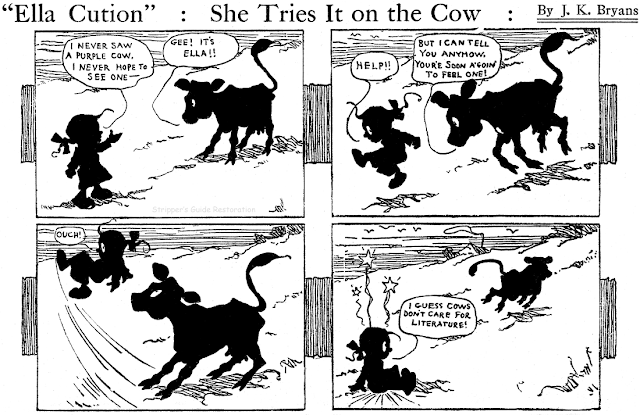 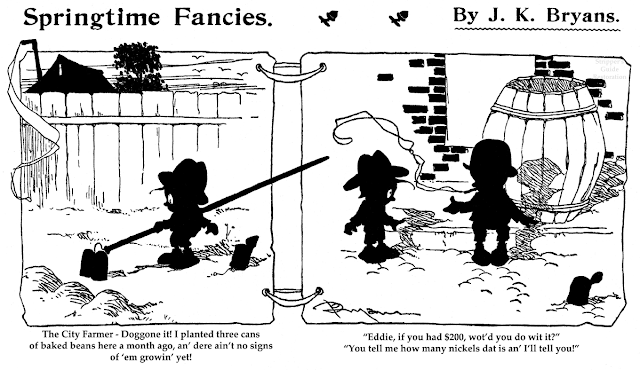 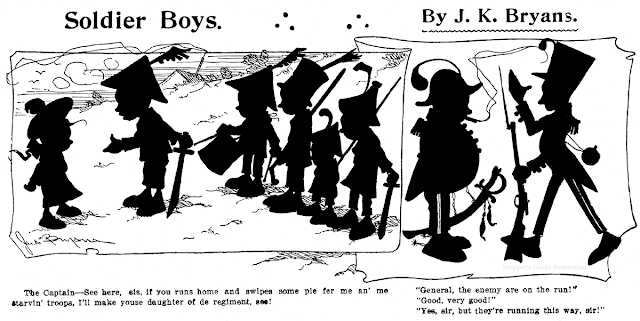 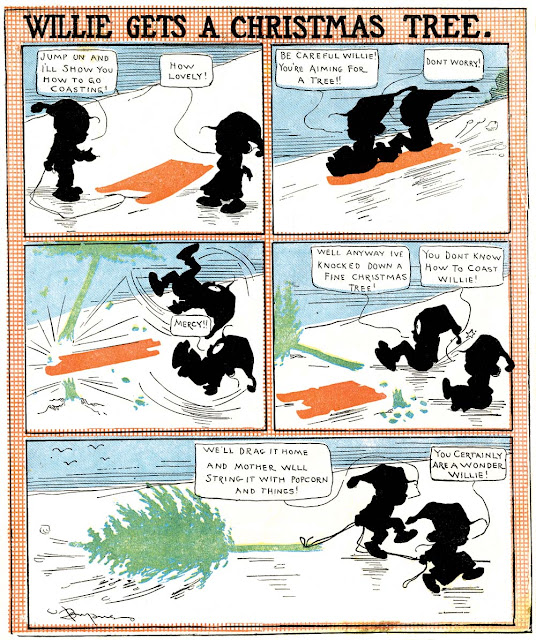 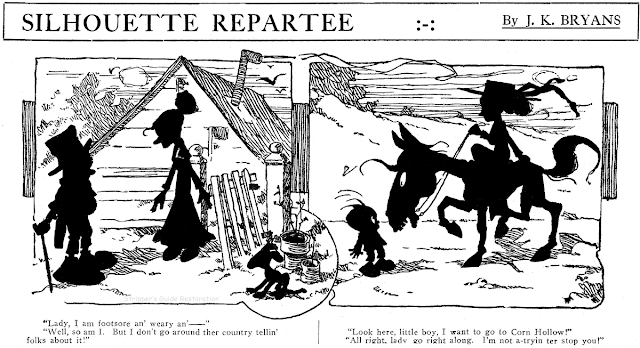 While many cartoonists enjoy employing silhouettes in their cartoons on occasion, no one could possibly match the steadfast love of the form exhibited by J.K. Bryans. In his long career at the New York newspapers, only one of his earliest short-lived strips (The Fluffy Duff Sisters of 1900) was not done using the silhouette technique.

Because Bryans' newspaper cartoons were instantly identifiable simply by the large blobs of black ink that drew your eye to them, naturally he didn't see any pressing need for a consistent running title to advertise his wares. He did sometimes use recurring titles, though, which generally refer to the technique: Silhouette Repartee, Fun in Black and White, In Silhouetteville and so on. He also had additional calling-cards: his cartoons generally appeared in pairs of subject-related gag cartoons under a common masthead, and the underlying art style was very much in the debt of William F. Marriner, whose copyists were legion in those days.

Because I generally don't consider single-panel gag cartoons without a unifying subject, title or genre as a series, assigning a start date to Bryans silhouette cartoons is a challenge. I feel that although he made contributions to New York newspapers in the 1890s that he doesn't have a real series going until June 6 1900, when the New York Evening Journal began featuring his cartoons regularly and giving him a byline.

The next year Bryans began submitting his trademark silhouettes to the McClure Syndicate's Sunday section, and they appeared there semi-regularly from August 18 1901 to October 9 1904 (in 1903 the C.J. Hirt-edited McClure section gave them a consistent (and awful) title for a short time -- Laughoettes). This moonlighting seemed not to have set well with the Hearst folks, and Bryans' cartoons were dropped from the Journal sometime in 1902 (unfortunately I cannot offer an exact date as the Evening Journal microfilm is woefully incomplete).

Bryans evidently wasn't totally thrilled with his gig at McClure, because he left them in order to take a position at the New York Evening World. His cartoons for them, which followed the same pattern as usual, began appearing on October 26 1904.

Although Bryans had a long relationship with the Evening World, he went through a few periods of hibernation. The first hiatus began after the cartoon in the April 28 1905 issue, and he didn't get back on the World horse until October 9 1906. What he did in that 17-month period I don't know. His return didn't last long, and once again he disappeared after the cartoon of December 11 1906. This time he disappeared for close to a year, returning on October 3 1907.

Finally Bryans settled into a groove, and his silhouette cartoons appeared on a semi-regular basis in the Evening World for the next seven years, finally ending on February 5 1914. By this time they were looking quite distinctly old-fashioned among the comic strips that were running alongside them. While Bryans would try sporadically to revive the silhouette cartoon business for at least another decade-and-a-half, he met with little success. Time and style had passed him by.

Tomorrow Alex Jay will fill in some of the biographical blanks with an Ink-Slinger Profile for Mr. Bryans.