Obscurity of the Day: Smokey the Bear 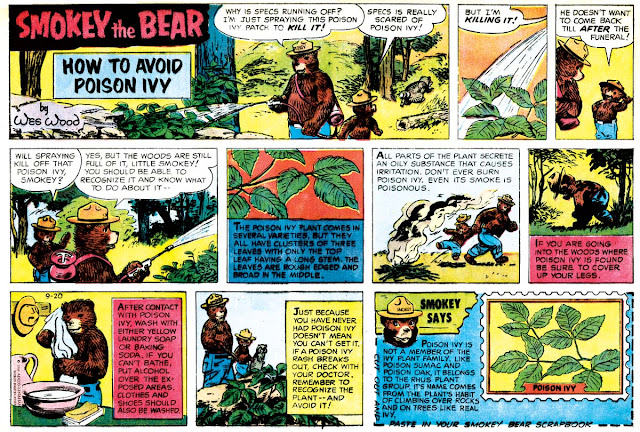 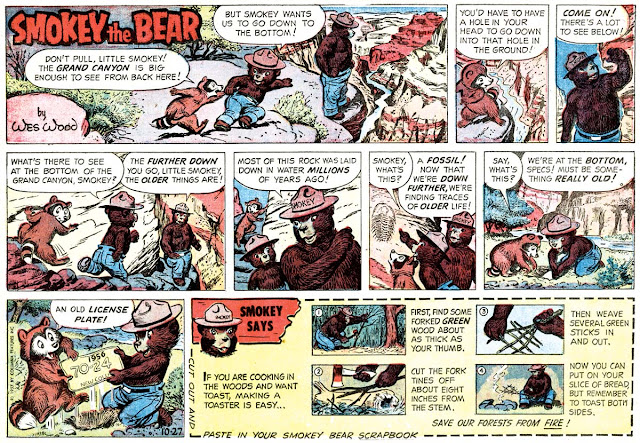 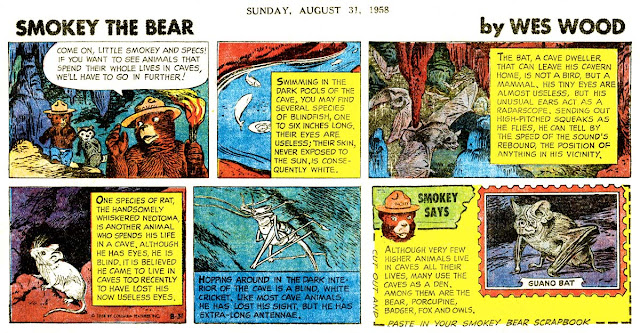 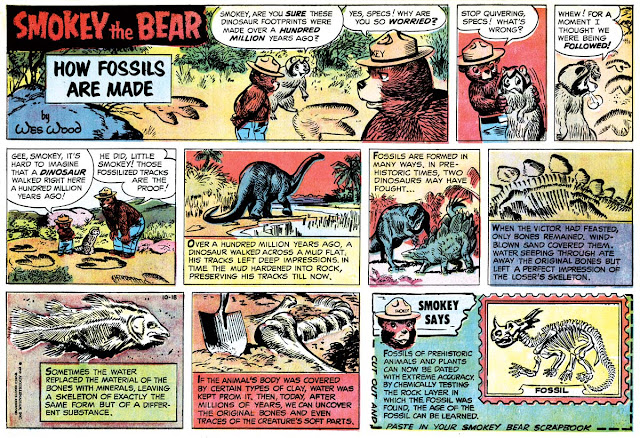 Smokey the bear, a marketing icon for forest fire prevention, was picked up for the comic strip treatment by Columbia Features, a syndicate of the 1950s and 60s that often promoted licensed character strips to newspapers.

Columbia had (in my opinion) a flawed business model that put too many hands in the cookie jar. Until a newspaper strip is really, really popular, the money just isn't there to pay licensees on top of what the syndicate and creator(s) need to earn. Columbia never had a really major hit on their hands, and so licensing never paid off for them.

Smokey the Bear was probably Columbia's biggest licensed success, but only in comparison to the truly anemic sales of Nero Wolfe and Bat Masterson. Since the character of Smokey the Bear doesn't really come with any iron-clad plot background, the syndicate was basically free to come up with a plot from scratch. This they chose not to do. What they did was copy Mark Trail whole cloth. They made Smokey a park ranger (okay, that's a given) and had the daily strip tell light adventure stories involving forestry, ecology and wildlife. Sundays were reserved for educational one-shot subjects. The Sundays even include a cut-out feature, called Smokey Says, to mimic Mark Trail's Trailways.

There was no brainstorming involved in how the strip would look or its characters, because those had already been established in a few comic book appearances iin Dell's Four Color series. Just like in the comic books, Smokey gained a kid, Little Smokey, for the strip, but no better half to explain Little Smokey's existence, at least that I've encountered. There's also a raccoon, Specs, to round out the cast. Not having seen much of the very rare daily version, I don't know if humans ever figured into the stories, but they seem to have never appeared in the Sunday.

Though the strip is credited to one 'Wes Wood', I'm assured that the strip was actually written by Paul S. Newman and cartoonist Mo Gollub, the folks who had also created his comic book adventures.

The Sunday strip debut was on June 16 1957, the daily following the next day. At the end of May 1959 the syndicate changed to Adcox-Lenahan Associates. James Lenahan was the founder of Columbia Features, but he got together with Glenn Adcox in December 1958 to form this new syndicate; why the strip moved there is a mystery, unless Lenahan perhaps cut ties with Columbia at that time. Unfortunately I don't have the inside scoop on that.

The latest strip I've been able to find is the final Sunday of 1959 (December 27), and I don't know if it survived into 1960 **. I do know that the feature was not advertised in the 1960 E&P yearbook, so it apparently didn't last long into the new decade.


** Jeffrey Lindenblatt has found the end of the series in the Des Moines Register, March 26, 1960.  Here is the final daily:

Comments:
I had completely forgotten about this strip. It ran in my local paper (Vancouver Sun) when I was a kid. I found it dull, but read it dutifully, thinking maybe I should learn this stuff. I'm still waiting to use my acquired knowledge.