Obscurity of the Day: Don't Some People Ask The Biggest Fool Questions? 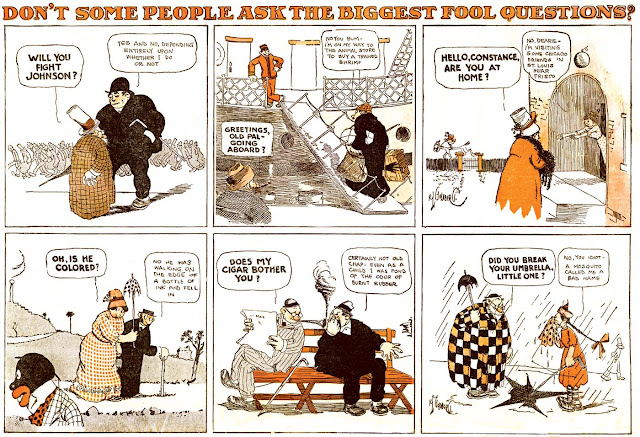 Even though Rube Goldberg worked at a minor New York paper, the Evening Mail, his comic genius wasn't kept under wraps for long. It wasn't his wacky inventions, though, that first brought him fame -- that came later -- but rather a series called Foolish Questions. In Goldberg's daily comic strips, which carried no consistent running title, one of his recurring features has some boob asking the sort of incredibly stupid question that doesn't deserve an answer. The inflicted-upon quashes their desire to brain the idiot and instead answers the question with a non sequitur so bizarre that it is sure to make the questioner's little pea-brain melt.

The series was so popular that a reprint book was issued in 1909, only a year after Goldberg began the series in the Mail. In the same year the Chicago Tribune procured the rights to publish a Sunday comic series reprinting the panels, with some spot color added. In the Tribune the series went by a title that was itself a rather foolish question -- Don't Some People Ask The Biggest Fool Questions?The Tribune series began on July 18 1909 and ran until August 21 1910.

Comments:
It reminds me of Al Jaffee's "Snappy Answers to Stupid Questions" that used to appear in Mad magazine.

I wonder if Al Jaffee had ever seen this strip before he came up with his long-running Mad series "Snappy Answers to Stupid Questions"?

Billy Murray, the prolific early recording artist, recorded a song called "Foolish Questions" in 1909. It was the same thing: Murray describes someone asking a stupid question and suggests a snappy comeback.I wouldn't be surprised if the song was inspired by this strip.

It's a funny song and worth a listen. Several people have posted it on YouTub.

It would seem that Goldberg owned his cartoons and the Mail just did syndicating for him. These same cartoons are retreaded elsewhere as well. It seems that in late 1909 he started his long run of self-syndicating with what are apparently more old recycled panels, under the title FOOLISH, FOOLISH, QUESTIONS, using mainly Foolish questions gags, but also those from any other of his series. I haven't seen any with a copyright line until 1911, which was "Copyright 1911 by R. L. Goldberg".

Looks like I'm not the only one who thought of Al Jaffee first thing. Mys second thought was "Here's Your Sign".