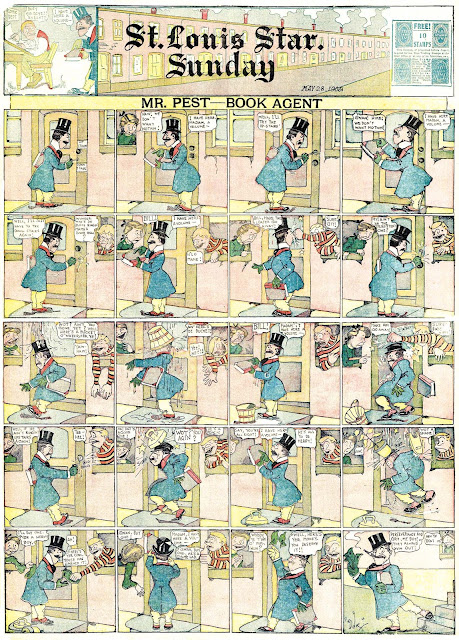 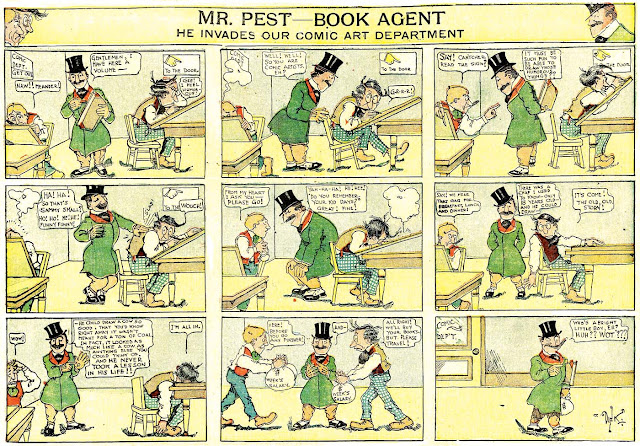 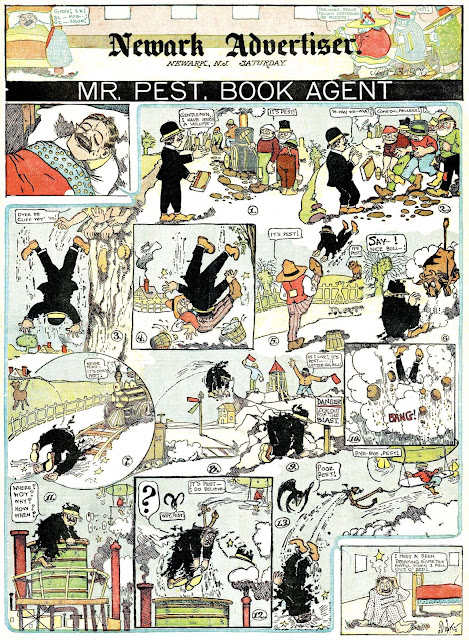 Repetitive though they may be, you've got to hand it to the Sunday strips at the dawn of the last century for being full of action. And one of the masters of frenetic strips full of antic wackiness was Dink Shannon of World Color Printing. He certainly wasn't the greatest cartoonist from an academic standpoint, but his imagination, pacing and sense of humor more than make up for it.

Second only to Dink's bizarre masterwork, Mooney Miggles, still not yet featured here on the Stripper's Guide blog, Mr. Pest Book Agent is Shannon at the height of his powers. He obviously loved drawing the strip, and tried to shoehorn in as much action and pithy dialogue as could possibly fit in the space. He also brought himself and fellow World Color bullpenner Ed Goewey into the strip on occasion, as you can see in the top two samples, a sure sign that he revelled in penning this feature.

Mr. Pest Book Agent ran in the World Color Printing Sunday comic sections from April 9 1905 to June 24 1906. Thanks to Cole Johnson for the sample scans.

Comments:
Shannon was a great cartoonist, it's a shame he is so overlooked today.

Back in those early days the "Book Agent", was a common figure in cartoons and jokes as indeed, a pest. The character would be modified later as the door-to-door salesman, nearly impossible to get rid of. They pretty much don't exist any more, in real life or in comics, except for the holdouts in Blondie.

This is a fun strip. I liked the joke in the last example: "Never mind--it's only Pest."

I do cartooning myself, and I identified a lot with that second strip.

As a cartoonist, I sympathized with the "It's come! The old, old story!" in re: the inevitable tale of the prodigy who "never took a lesson in his life".