Obscurity of the Day: Back-Yard Movies 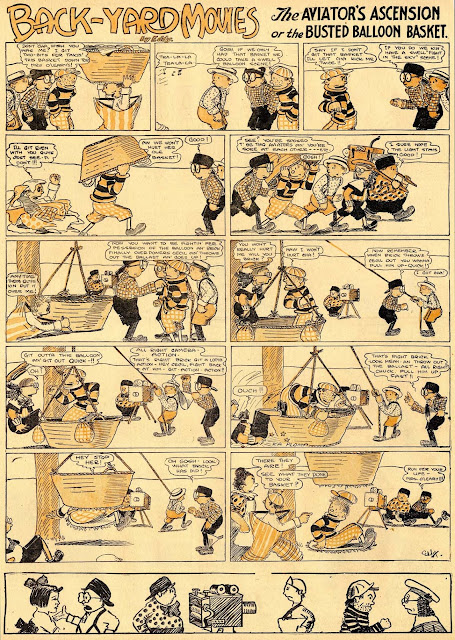 What happened to 'Eddy', though, is something of a mystery. He of the mono-monicker contributed a rollicking fun strip in which a kid gang gets hold of a movie camera and proceeds to try their hands at making films. The art was on a sub-professional level but was certainly not without a delightful sense of manic energy. Back-Yard Movies had a surprisingly long engagement in the Herald, running from August 13 1916 to June 17 1917.

Thanks to Cole Johnson for the sample scan. Cole also had an interesting comment about Eddy, saying that if his art-spotting eye wasn't failing him, that 'Eddy' also did some ghosting work on Polly and her Pals and Eddie's Friends later on. Certainly I recall Polly having a pretty bad ghost working on it for awhile, but is it the same guy? I dunno.

Comments:
It's odd that there was such an undistinguished talent among the usually stellar Keeley line-up. "eddy" could have benefited from DeBeck's cartooning course.
Cole did have an expert eye for spotting the hand of different artists, and he'd be the first to say so. I remember going over this and there wasn't much more that became of Eddy. Is it possible he was one of the men who worked on Charley Chaplin's Comic Capers after Carothers' sudden death?

Hi Mark --
"Eddy" never signed the Charlie Chaplin strip, but there were plenty of those CC strips that were unsigned. So if someone wanted to occupy themselves with IDing incredibly bad art, they might well find Eddy lurking there somewhere.

By the way, I think I should state for the record that I am not convinced that Alex Jay's suggested Eddy ID in the June 15 post is indeed our man. The signatures do not to my eyes have all that much in common.

Maybe they are the same guy-now,usually one wouldn't have his signature go to the right sometimes and left at another- though I notice one of the things that are supposed to be identifying traits is that in both samples, the first "d" is tightly in after the "E", and shorter than the second "d". Also the "y" in both have a straight down, unlooped tail.