Obscurity of the Day: Elmer Squee 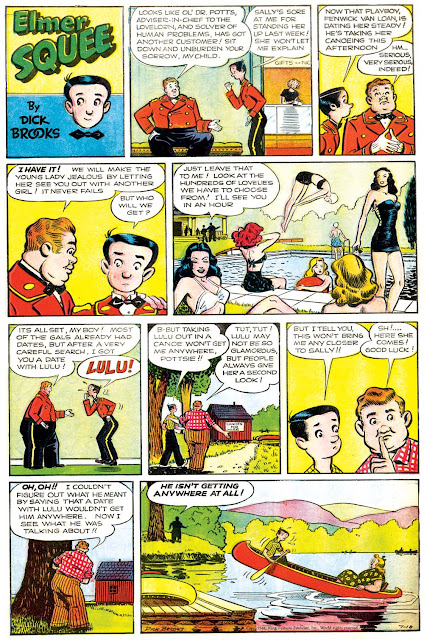 When Dick Brooks went into the Navy his art background came in handy when he decided he'd like to commemorate the experiences of a mild young man, having signed up for the Navy right after Pearl Harbor, goes through training and out to sea. The cartoon panel, titled Elmer Squee, found a very eager audience of landlubbers, curious about anything military, when it was published in book form by McMillan in 1942.

After the war, Dick Brooks found work in the bullpen at King Features Syndicate. When he heard that a strip was about to be dropped by the syndicate, he submitted a 'civilian-ized' Elmer Squee strip. Although the syndicates were awash in military strips trying to remain interesting to a suddenly demilitarized nation, for some reason King decided to take on Elmer Squee. It may have helped that Brooks was a very fine cartoonist, and Elmer had sort of an Archie Andrews sort of vibe -- a character who was hot in post-war comic books and in newspaper strips.

Elmer Squee debuted as a Sunday-only strip on September 8 1946, but was an utter flop in sales. I'm not sure that it ever appeared in a paper outside of the Hearst chain, and even very few of them used it. Despite the lack of sales, the strip continued until August 28 1949, quite a respectable run for an undeniable sales flop.

Although I don't recall having seen them for myself, I am told that the Elmer Squee strip eventually added  twin teenage girls as characters. These became the main characters of Brooks' next strip, which was a sales success for almost thirty years -- The Jackson Twins.

Comments:
The Elmer Squee Sunday strip made it to Sweden and Denmark at the end of the 40s. In Sweden this was one of many American Sunday strips in the weekly comic book Karl-Alfred (the Swedish title for Popeye). Each strip in the comic book had a full page or a half page, similar to the funnies in an American Sunday comic section. The Elmer Squee strip title was “Pelle Piccolo”, and was a part of the content from issue number 13, 1949 until number 24, 1950. Karl-Alfred was a co-production with the Danish comic book Skipper Skræk (Danish title for Popeye), and the strip was published in Denmark as well, from number 23, 1949 to number 34, 1950. In Denmark the strip title was “John Pikkolo”.
I’m going to publish something about this shortly in my blog https://rogersmagasin.com/