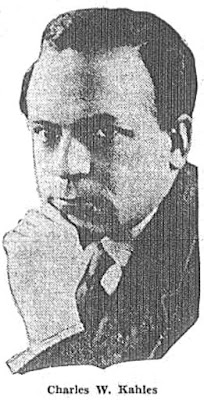 Charles William Kahles was born in Lengfurt, Germany, on January 12, 1878, according to the obituary in the Brooklyn Daily Eagle (New York), January 21, 1931. The same birth date was found on Kahles’s World War I draft card and several passenger lists.

According to Robert C. Harvey, in the American National Biography: Supplement 2  (2005), Kahles, with his mother, sister, and brother, came to the United States in 1883. His father and older brother had established a business and home in Windsor Terrace, Brooklyn.

The Eagle, February 3, 1924, published an article about Kahles’s Hairbreadth Harry and said:


Kahles was born in Germany, coming to Brooklyn when a small boy. He cannot remember when he did not have the urge for a pencil in his fingers. While attending the district school in Windsor Terrace—old Number Three—he took all the prizes in drawing.

“I studied at Pratt Institute and at the Brooklyn Art School for a number of years, where I was a pupil of Joseph H. Boston. Mr. Boston is an artist of national reputation and a good friend of mine. I went to work as sketch artist for the New York Recorder at 16….

“At 20 I was a regular assignment man on the World. I took my work very seriously and had no intention off [sic] becoming a cartoonist. But one day the man who did the regular daily comic was ill and John Tennant wanted a comic in a hurry. There was no one around but me, so he asked me to do it. Then he ordered that I do nothing buy comics thereafter.”

Kahles created “Clarence the Cop” for the World after Tennant was transferred to the Sunday department. Clarence ran for 10 years, being a contemporary of the Katzenjammer Kids and Happy Hooligan.

The 1892 New York state census recorded the Kahles family in Flatbush, Brooklyn. Kahles was the third of four children born to Peter and Elizabeth.

In the 1900 U.S. Federal Census, Kahles’s widow mother was the head of the household. The family of five resided in Brooklyn at 464 13th Street; the same address in the 1910 census. Kahles’s occupation was newspaper artist. Older brother Joseph worked for a paper company, and younger brother Frederick was a silverware designer. 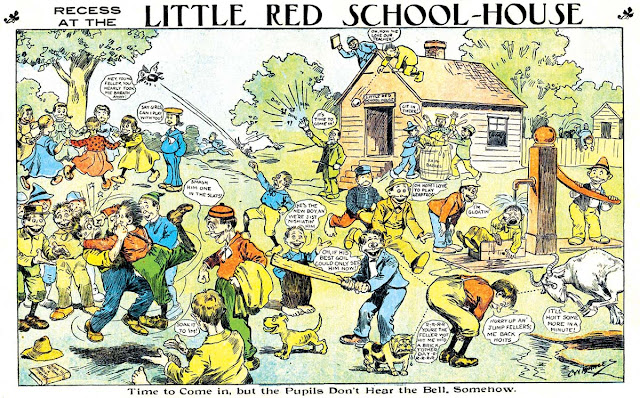 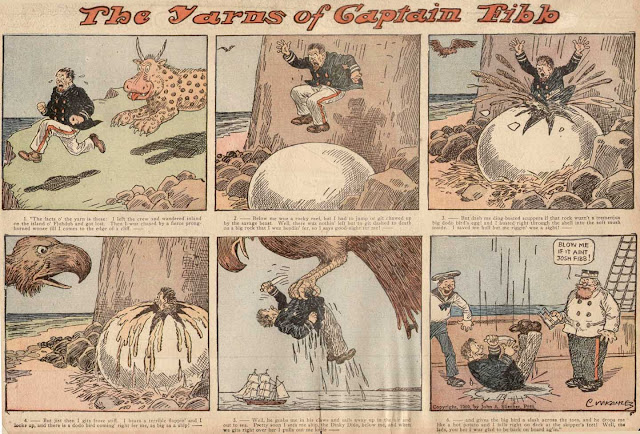 According to the 1915 New York state census, cartoonist Kahles lived with his mother and sister, Margaret, who was the head of the household. Their home was at 901 St. John’s Place in Brooklyn.

Kahles married Helen H. Sturtevant on June 4, 1918 in Manhattan. A few months later Kahles signed his World War I draft card on September 12, 1918. He resided in Brooklyn at 1353 Union Street. He was described as medium height and build with brown eyes and hair.

Kahles’s home in the 1920 census was in Queens, New York at 9312 Kelsey Avenue, Queens Village. He had an eight-year-old daughter named Jessie from his first marriage. (Jessie had a letter published in Life, April 21, 1952.)

On September 20, 1924, the family returned from a trip to Europe, sailing from Antwerp, Belgium to New York City. The passenger list said their home address was 9312 219th Street, Queens, New York. The same address plus Queens Village was in the 1925 New York state census. The Kahles family made their second visit to Europe in 1926. A September 1929 passenger list recorded their third European trip and home address, 98 Myrtle Drive, Great Neck, Long Island, New York. 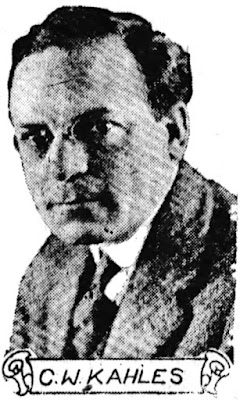 Kahles’s address was unchanged in the 1930 census. Eight months later, Kahles passed away January 21, 1931, at his home in Great Neck. His death was reported that day in the Eagle. Kahles was laid to rest at Green-Wood Cemetery, lot 31394, section 468, grave 271.


A note of sadness introduced itself in this connection, yesterday, when the death of Charles W. Kahles, noted artist, at Great Neck, L. I., became known. Although ill at home for nearly three weeks, he had tentatively accepted the invitation of Charles R. Macauley, the Eagle’s editorial cartoonist, to assist in the consultation game with Capablanca. As chess had long been his hobby, he was looking forward with real pleasure to the forthcoming battle of wits.

His advice will be missed, for, as a member of the Brooklyn Chess Club until a year ago, he had had plenty of club experience and was a foeman to be feared. According to R. M. Varnum, secretary of the Brooklyn Chess Club, Mr. Kahles, although loath to do it, had resigned his membership last year. He found the journey between the club and his Long Island home too much of a strain. Some 15 years ago, it is recalled by members, he suffered from heart trouble, from which by the exercise of care, he recovered.

On the walls of he Brooklyn Chess Club are several of Mr. Kahles’s comic cartoons dealing with chess. When at the board he, as a good player, took his chess seriously, but, naturally, he was only too well aware of its humorous side.

The terms of Kahles’s will was published in the Eagle, February 6, 1931.

Comments:
Cole and I knew Kahles's daughter Jessie. She was a tireless advocate for her father's legacy. She was also humorless, impatient and probably made more enemies than friends over the years. Nevertheless, we tried our best to get people to care about him, and not that he was unworthy of interest. Hairbreadth Harry was truly a watershed strip, and Kahles's other early strips with Sci-Fi themes are important too. But alas, everything he ever did was for syndicates that shriveled up too long ago for them to do any work promoting them into an anywhere modern era.
Anyway, she gave us a ton of his books and family papers/ photos, some artwork, including an original of Clarence the Cop, and the Trade Mark to Hairbreadth Harry. It expired a long time ago, nobody knew who it was. Anyway, we had a gallery show of Harry and a banquet for her in Philly in 1987, among the guests being F.O. Alexander, who succeeded Kahles on the feature.
Kahles (pronounced Kaw-Less) was apparently a very unhappy man, Jessie said his wife never had anything but contempt for him, and he holed up in his studio for days at a time, listening to his Classical records and devoting himself completely to Harry and co. hour after hour. He was also a slight, perhaps sickly man. I have a professional portrait photo of him at his drawing board (drawing the 1 December 1929 Sunday) and he looks gaunt and tired. In 1931 it wasn't iunusual to die at 53, the national average for a man was 59.

the Hairbreadth Harry daily sequence reprinted in nemo magazine from Mark Johnson's collection has long been a favorite and highlight from that great anthology.
the Spencer Research Library at the University of Kansas in Lawrence had a few CW Kahles materials (family letters mostly), but maybe no comics (?) or at least disappointingly few.

The story you reference, which we gave a title to, through time and space", was a good representative of Kahles's writing abilities. He was a real wit and satirist, certainly one of the most literate cartoonists of his time. I believe he was really a genius. I own the only original art from that story, an April 1924 strip featuring Rudolph only.
Hairbreadth Harry is a strip that is worthy of a reprint collection, but nobody would take a chance on such a forgotten title, regardless of quality.