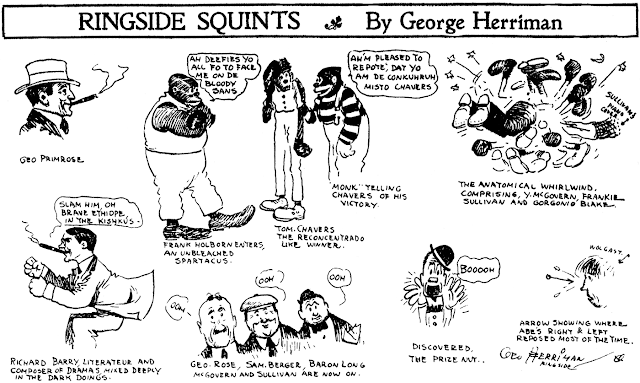 December 12, 1908 -- Herriman comments on last night's fights, which was headlined by Abe Attell only being able to coax a draw out of Ad Wolgast. This would be Attell's last west coast fight for a long time.

For the first time I can recall, the usually all-knowing Boxrec website has let me down. They are either unaware of the undercard fights Herriman is describing here, or perhaps the bouts were considered too minor to count in records. Frankie Sullivan is listed as having his debut fight a week later than this, Young McGovern is listed as retiring a few months earlier, and the black fighters are not in the Boxrec database at all.

On the same sports page with this cartoon, Herriman also contrtibuted a text story about the boxing bouts. Unfortunately I didn't notice it when I was going through the microfilm, and it was left off the photocopy. So all I have is the headline "Herriman Drops Into Literature -- Paints the Ringside Events in Words as Well as Pictures". Ah well.

Comments:
He certainly loved those fights. Didn't he?

Well, he covered what the paper told him to cover. Uncertain that Herriman's personal interests coincided with his job.

Wish You Were Here, from Chester Gould 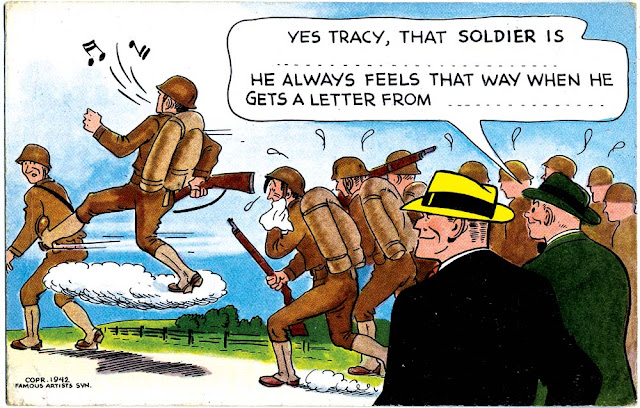 Almost all the postcards in my collection are from the 1900s and 1910s, but here's a much later one, from 1942 to be exact. As you can guess, this postcard was designed to be sent home by a G.I., and therefore the card was presumably distributed almost exclusively on military bases.

Famous Artists Syndicate (of which I know nothing) seems to have licensed the characters for their military postcard line primarily from the Chicago Tribune (Dick Tracy, Moon Mullins in multiple versions) but also a few feature King Features characters (Snuffy Smith, Popeye).

Chester Gould likely had nothing to do with this card, because it appears that the Tracy characters are stock art and the rest of the art is not by Gould. I imagine that this is true of the rest of the cards in this line as well.

Thomas Michael “Tom” Swaja was born in Minnesota on December 29, 1907. His birth date is from the Social Security Death Index and birthplace from census records.

The 1910 U.S. Federal Census said Swaja was the third of four children born to Peter, a laborer, and Tillie, both Autrain emigrants. The family resided in Minneapolis, Minnesota, at 1224 Broadway Street.

Two more children were added to Swaja household in the 1920 census. The family lived at 2529 3rd Street in Minneapolis. The 1925 Minneapolis city directory listed Swaja at 1928 N E 5th Street. He was a messenger with the W.B. Foshay Company. The next available directory, from 1928, said Swaja was an artist with the Journal Printing Company.

Swaja has not yet been found in the 1930 census. A listing in the Des Moines, Iowa city directory, said Swaja’s address was 675 18th Street. He was an artist with the Register & Tribune newspaper. He moved at least five times before the next census.

The 1940 census recorded Swaja in Des Moines at 1734 Second Cedar. He was married and had two sons, David and Stephen. His highest level of education was the eighth grade. Swaja was still with the Register & Tribune.

American Newspaper Comics (2012) said Swaja was the last of five artists to draw Iowa Oddities for the Register & Tribune. He was preceded by Bud Sauers, Ken Eaton, Gene Cannoy and Henry Landgren. Swaja drew Iowa Oddities from June 20, 1943 to September 26, 1943, and, after a hiatus, from December 3, 1943 to January 2, 1944. The panel series continued after that date, but became more text-heavy with a spot illustration only and was rarely signed.

A November 1948 issue of Editor & Publisher reported staff changes at the Portland Journal in Oregon.


…Harland Clark has resigned from the from the promotion department of the Portland (Ore.) Journal, to enter freelance advertising business with Carl Erickson, formerly promotion artist on that paper. Tom Swaja, formerly editorial staff artist at the Journal, succeeds Erickson.

The 1953 Portland, Oregon city directory said Swaja resided at 1235 SW Carson and was an artist with the newspaper, The Oregonian.


Tom and Ruth Swaja celebrated their 50th wedding anniversary with a reception and buffet, which included a three-tiered wedding cake and champagne.

The Swajas were married Sept. 2, 1935, in Springfield, Ill. Tom Swaja worked as a staff artist for The Oregonian in the 1950s and retired from the Boeing Co. as a commercial artist in 1969. Their children are Rita Gruhlke of Tacoma; Mary Jo Conley of Sandpoint, Idaho; Steve of Universal City, Calif.; Dave and Sheila of Banks; and Kathy Fisher of Hillsboro. The couple has 13 grandchildren and 11 great-grandchildren.

Swaja passed away May 7, 1991, in Washington state, according to the Oregon death index. 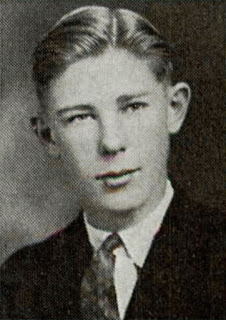 Nels Henry Landgren was born in Malmo, Sweden, on November 22, 1907, according to his Iowa World War II service file and Iowa Artists of the First Hundred Years (1939). A passenger list recorded Landgren aboard the S.S. Lusitania which arrived in New York harbor August 24, 1912. Landgren’s final destination was Mason City, Iowa.

The 1920 U.S. Federal Census recorded Landgren as the oldest of three children born to Nels, a carpenter, and Hilda. They resided in Mason City at 114 129th Street SW. Landgren graduated from Mason City High School in 1925. The 1928 Mason City city directory listing said Landgren was a student at the same address.

Landgren’s address did not change in the 1930 census. According to Iowa Artists of the First Hundred Years, Landgren studied at the Chicago Academy of Fine Arts, where he was a pupil of Ruth Van Sickle Ford and Arthur Johnson. He exhibited at North Iowa Fair and public library in Mason City. Landgren won ten first prizes at the Fair. sometime after the census, Landgren found work at a local newspaper.

A 1933 Des Moines city directory said Landgren was a staff artist at the Register & Tribune. He resided at 675 18th Street.

American Newspaper Comics (2012) said Landgren was the fourth of five artists to draw Iowa Oddities for the Register & Tribune. Preceding him were Bud Sauers, Ken Eaton and Gene Cannoy. Landgren’s run lasted from December 27, 1942 to June 13, 1943. He followed by Tom Swaja.

Announcement is made of the marriage of Nels Henry Landgren, son of Mr. and Mrs. Nels Landgren, 524 Twentieth street. Mr. and Mrs. Marshall Sauers attended the couple. The parents of the bride and bridegroom and a few close friends attended the ceremony. Immediately after the wedding, a reception was held at the home of the bride’s parents. The couple left on a short trip to Chicago and returning will be at home at 1422 Twenty-eighth street, Des Moines. Mr. Landgren is employed by a Des Moines newspaper.

The 1940 census recorded the newlyweds at the Des Moines address. The following year the couple was at 2304 39th Street.

After the war, Landgren returned to the Register & Tribune and remarried to Barbara.

Landgren passed away September 21, 1989. He was laid to rest at the Masonic Cemetery.


Francis Eugene “Gene” Cannoy was born in Iowa on October 14, 1919, according to the Evangelical Lutheran Church of America record at Ancestry.com. It said Cannoy was baptized in Rembrandt, Iowa on November 23, 1919. Cannoy’s parents were Roy Cannoy and Bertha Michelson.

The 1920 U.S. Federal Census recorded Cannoy, his parents and older brother, Marlin, in Barnes, Iowa on Main Street. Cannoy’s father was a barber.

The Cannoys resided in Rembrandt, Iowa, according to the 1925 Iowa state census. In 1930 the family was back in Barnes.

The Cannoys were Rembrandt residents in the 1940 census. Cannoy completed his first year of college. Information about Cannoy’s art training has not been found.

American Newspaper Comics (2012) said Cannoy was the third of five artists to draw Iowa Oddities for the Register & Tribune. He was preceded by Bud Sauers and Ken Eaton. Cannoy produced Iowa Oddities from December 15, 1940 to December 20, 1942. Canny was followed by Henry Landgren and Tom Swaja.
Cannoy married in 1942. A photograph of Cannoy and his wife appeared in the Register, October 11, 1942.

At some point, Cannoy moved to Los Angeles, California, where he continued to work in the newspaper industry. The Long Beach Independent (California), May 1, 1968, reported the Los Angeles Herald-Examiner newspaper strike in December 1967.


…In another incident, Los Angeles police booked Keith Robert McGraq, 361 of Southgate on suspicion of assault after he allegedly struck the newspaper's art department director as he crossed the picket line. Gene Cannoy, 48, the art director, suffered a cut lip. He is one of the supervisory and non-union employes that have worked at the paper since the strike began last Dec. 15. 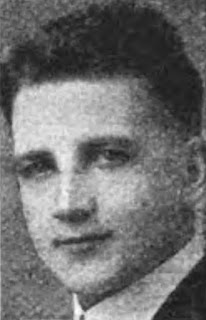 Kenneth Nye “Ken” Eaton was born in Grand Forks, North Dakota, on March 13, 1900. The birth date is from Eaton’s World War draft card and the birthplace is from the 1900 U.S. Federal Census. His parents were Clark, an elevator agent, and Jessie.

According to the 1910 census, the Eaton family resided in Park River, North Dakota. Eaton had two sisters. His maternal grandmother, Esther Nye, was part of the household. Eaton’s father was a wheat buyer.

Eaton signed his World War I draft card on September 12, 1918. He lived in Park River where he was a grain elevator assistant at the Farmers Elevator Company. He was described as of medium height, slender build, with dark blue eyes and brown hair.

The 1920 census recorded unemployed Eaton in his father’s household in Park River.

The 1921 and 1922 Minneapolis, Minnesota, city directories listed Eaton at the YMCA. Eaton was a student at the Federal School in Minneapolis and was one of several students featured in the school’s advertisement in Cartoons Magazine, May 1921. The Des Moines Register, February 6, 1941, said Eaton was an artist on the Minneapolis Journal.

At some point Eaton found work in another state. He was in the 1926 Sioux City, Iowa, city directory. He and his wife, Rose, resided in an apartment at 4 Valentine. According to the Register, Eaton was a Sioux City Journal staff artist.

The 1930 census said newspaper artist Eaton married at age 26. He, his wife and son, Keith, lived in Des Moines, Iowa, at 1909 Eleventh Street.

American Newspaper Comics (2012) said Eaton followed Bud Sauers on the panel, Iowa Oddities. Eaton’s run was from March 7, 1937 to December 8, 1940, with Sauers filling in November 10, 1940. Five artists drew the panel for the Register. One of Eaton’s oddities was mentioned in 124 Years Before The Navy Mast–The Patten Family (2006).

In 1940, Eaton owned a home in Des Moines at 3313 52nd Street and had a second son, Roland. The census said Eaton completed three years of high school.

Eaton passed away February 5, 1941, in Des Moines as reported the following day in the Register.


Kenneth Nye Eaton, 40, an artist for The Register and Tribune, 15 years, died Wednesday afternoon at Iowa Methodist hospital of a stroke. He had been ill of high blood pressure since Oct. 1 and was stricken after returning to work last Monday.

Mr. Eaton’s work included sketches for the Iowa Oddities, a regular feature of The Sunday Register, news maps and sketches of screen personalities and prominent personages.

Before joining The Register and Tribune, Mr. Eaton worked as an artist for the Minneapolis, Minn., Journal, now the Star-Journal, and the Sioux City, Ia., Journal.

Eaton was laid to rest at Resthaven Cemetery.