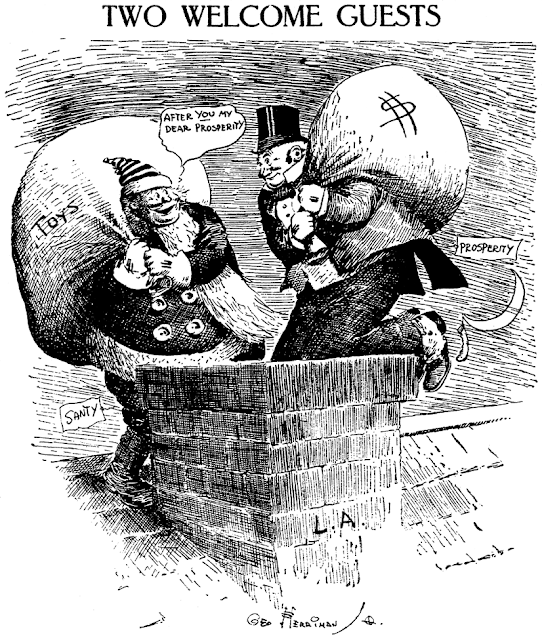 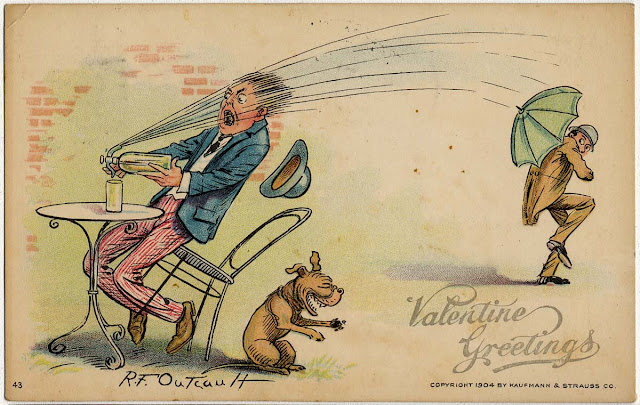 Here's another card from Outcault's 1904 Kaufmann & Strauss Co. series. This one claims a Valentine's Day theme, but what the cartoon has to do with that occasion is beyond my ability to reason out.

Comments:
Kaufman & Strauss had commissioned a series of cards by big name cartoonists, often using their characters, like Opper doing a batch with Happy Hooligan. Outcault seemed to do a Tige-only series. None of them were specific to Valentine's day, in fact the same cards were usually seen with the ornate "Valentine greetings" logo missing. It seems Valentine's day was an extra heavy post card season so they would overprint that same logo in a blank area of the image.


William Augustin Kolliker was born in Bern, Switzerland, on October 12, 1905, according to Who’s Who in American Art: 1993–94 (1993) and German Immigrant Artists in America: A Biographical Dictionary (1997) He studied at the Berner Secundar Schule in Bern. Kolliker’s study was interrupted when his family left for the United States. At age 16, Kolliker was with his younger brother Franz and Brooklyn-born mother Agnes. The status of his Swiss father is not known. The trio were aboard the S.S. Yorck when it departed Bremen, Germany on June 3, 1922. The family arrived in New York City on June 15. The passenger list said they were going to see William Folk who resided in Brooklyn at 164 Saratoga Avenue. Folk was Kolliker’s uncle.

Kolliker was profiled in the El Paso Herald-Post (Texas), October 29, 1957. He was a staff artist for the New York American and studied at the National Academy of Design. He moved on to the Baltimore American and attended the Maryland Institute. Kolliker returned to New York and produced art for the tabloid, New York Graphic. Who’s Who said Kolliker took lessons at the Grand Central Art School and Art Students League. His next move was to Boston, Massachusetts, where he studied, according to Who’s Who, at the Boston School of Art.

Boston city directories, from 1927 to 1929, listed “William C Kolliker” who worked in an art department. The 1930 directory had his name as “William A Kolliker”.

The 1930 U.S. Federal Census, recorded newspaper artist Kolliker and his wife, Doris, in Boston at 1687 Commonwealth Avenue. About four months later, Kolliker became a naturalized citizen on August 21, 1930. His birth name was Wilhelm.

The Herald-Post said Kolliker was illustrator, art editor and art director of Hearst’s American Weekly for 17 years. Kolliker also worked in advertising. Among the books Kolliker has illustrated are Adventures in Puddle Muddle (1935) and Help the Farmer (1943).

Kolliker and Doris divorced in 1953. Kolliker married Helen Magruder, a former El Paso and Fort Worth, Texas resident. They moved to El Paso where Kolliker took up painting. He was president of the El Paso Artists’ Association, a director of the Advertising Club of El Paso, and a member of the New York Art Directors Club, the Amateur Astronomers Society, the American Philatelic Society and the International Club. Kolliker’s work was exhibited in galleries and museums.

Kolliker passed away January 24, 1995, in El Paso, according to the Texas Death Index at Ancestry.com. 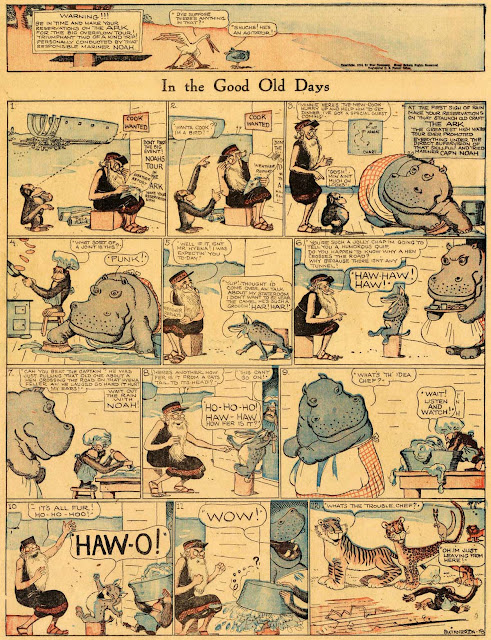 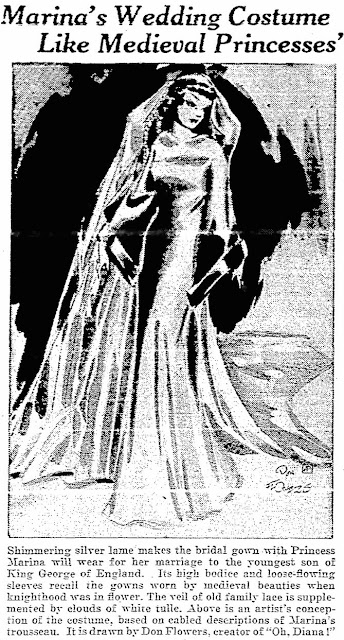 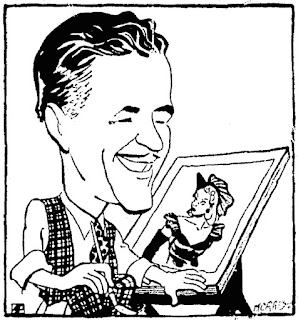 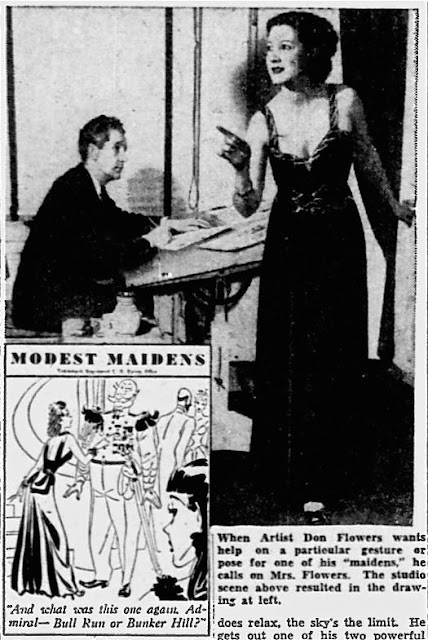 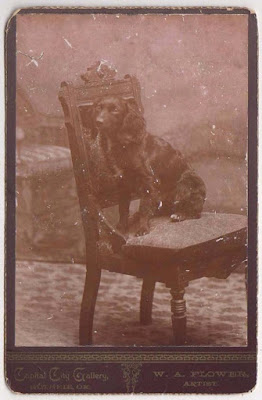 Obscurity of the Day: The Colonials

Joe Escourido was evidently a sharp cookie, in that he foresaw as early as 1970 that the upcoming bicentennial was going to make anything related to the American revolutionary era a hot ticket. He created The Colonials, a gag strip about that era, and United Feature Syndicate shopped it around to a somewhat receptive audience of newspaper editors.

The strip debuted on November 30 1970 as a Sunday and daily strip in a respectable number of newspapers, but it wasn't long before trouble started. Although The Colonials did beat everyone else out of the gate, in the ensuing years other strips, like Yankee Doodles and Pluribus, began to steal away clients. As important as the Bicentennial was, editors still weren't about to give more than one space to strips that played off it. The Colonials had some problems that made it an easy target for syndicate salesmen urging a change. The major problem was that Escourido seemed somewhat bored by his Colonial era setting, and his humor sometimes had little or nothing to do with the time period. That would have been a big problem to editors. Secondly, Escourido seemed to get a big kick out of sometimes writing dialogue in a Colonial/British accent. What he actually accomplished is to make the dialogue almost indecipherable (see top two examples).

In 1973 the strip must have already been in trouble, because the Sunday was dropped that year, and the strip was renamed Colonial Capers - presumably a move intended to show the more dimwitted newspaper editors that the strip was indeed meant to be funny. All of it was to no avail. By the bicentennial year the strip's client list was truly anemic, and it could even be that the strip did not even make it to July 4 1976. It was advertised in E&P that year, but I've never found it running anywhere later than 1975.