Obscurity of the Day: The City Dog in the Country 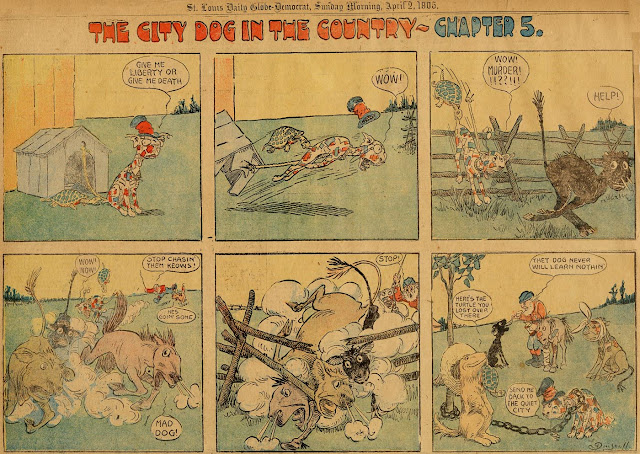 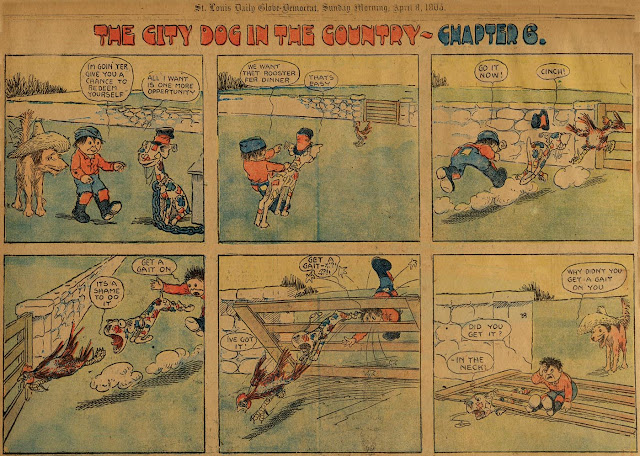 Yesterday we featured a DeVoss Driscoll strip, If Papa Was a Boy,  in which he aped the cartooning ability of a child. Today we see Driscoll's real art style, which although perhaps not the stuff of a McCay or a Herriman, has an energetic and boisterous charm. The City Dog in the Country followed the slapstick misadventures of a dog who is out of his element on a farm.

In case you're wondering about the very odd coloring on the dog, the blue and red bits are supposed to represent bandages, which he has earned from previous episodes of the strip.

An odd feature of this strip is that it is offered in 'chapters', as if there were some ongoing narrative that must be followed by the reader. This isn't really the case, except that in chapter one the dog arrives on the farm, and in the final chapter, he returns to the city.

The City Dog in the Country ran in the St. Louis Globe-Democrat's home-cooked Sunday comic section from March 5 to June 4 1905.

Comments:
you posted this one minute after my comment on the previous.
If I was editing a comic (as I have done in the past on occasion) and this guy came in the door, I'd beg him to use yesterday's style and give him the spot. I even thought the repetitious gag was okay.