Obscurity of the Day: If Papa Was a Boy 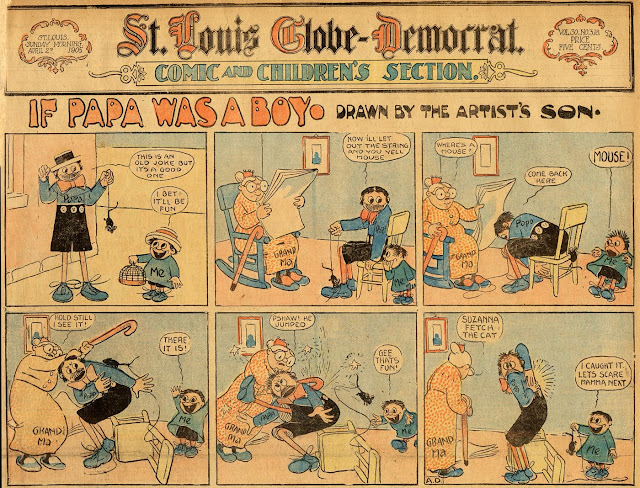 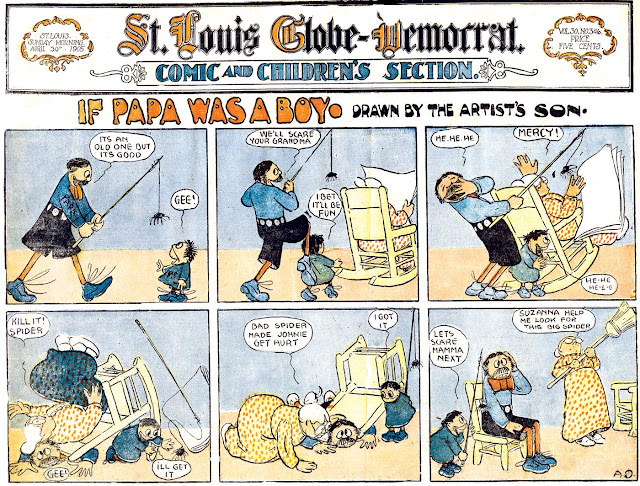 DeVoss Driscoll, who was a mainstay of the locally-produced Sunday comic section of the St. Louis Globe-Democrat in 1903-05, was a decent artist, but not much of a gag writer. Therefore it might not have been his most brilliant idea for a series that he would draw it as if a child was doing the art. In If Papa Was a Boy readers got the worst of both worlds -- bad art and bad writing.

On the other hand, since Driscoll was producing a heck of a lot of material for the comic section, maybe the idea was borne of necessity -- he simply did not have time to draw all of his material. Solution -- draw badly, but with an ironclad excuse. Driscoll went so far as to sign the strip "A.D." -- presumably he had a son whose name began with letter 'A' (a presumption that I will leave Alex Jay to explore if he desires).

If Papa Was a Boy ran in the Globe-Democrat from March 26 to June 4 1905, near the end of Driscoll's ordeal -- the newspaper would soon switch over to syndicated content.

Since Mr. Driscoll really was a decent artist, we'll feature him tomorrow drawing in his native style. Fair's fair!

Comments:
Nothing wrong with the art on this one, so I await to see what you consider to be 'decent.'