Obscurity of the Day: Penn's Place 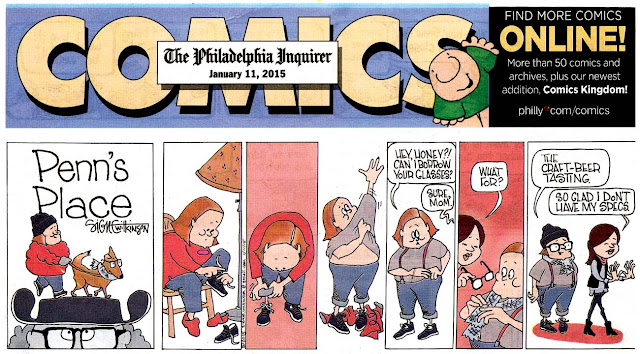 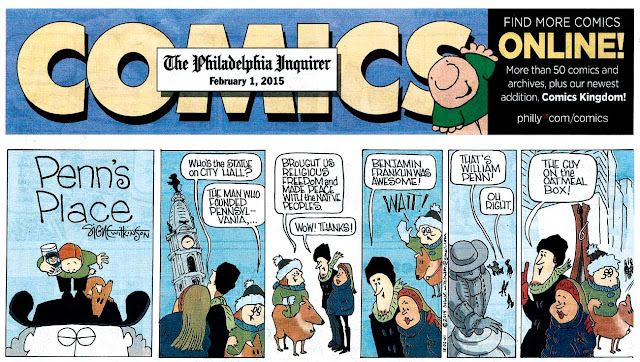 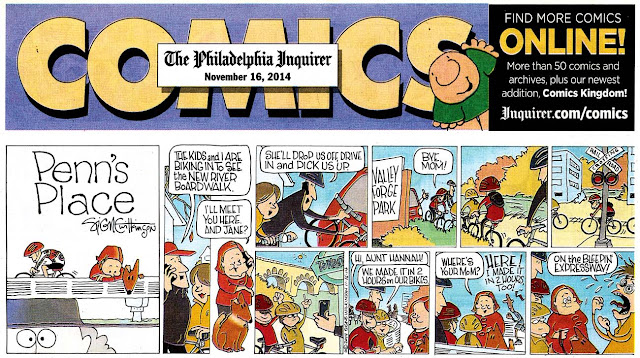 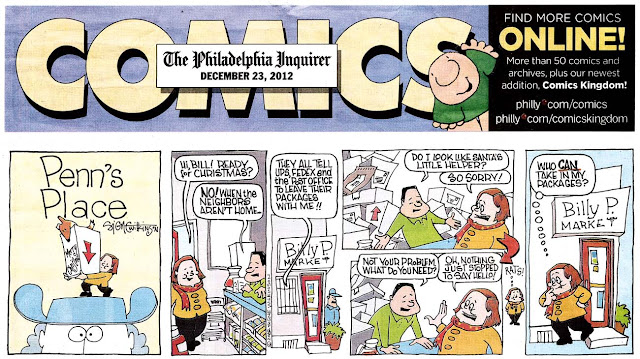 Penn's Place has the dubious honor of being the newest feature to be a Stripper's Guide Obscurity of the Day. It ended just a little more than a year ago. To be fair though, it's no obscurity if you live in Philadelphia because the strip enjoyed the primo position on the front top of the Inquirer's Sunday comic section every week.

Signe Wilkinson, the editorial cartoonist for the Philadelphia Daily News, created the Sunday-only strip shortly after she gave up her syndicated comic strip Family Tree (still in reruns on GoComics). Penn's Place debuted in the Sunday Inquirer on November 20 2011. The strip is about Hannah, a Philly resident, and the gags are almost always about some aspect of Philadelphia living, whether traffic, tourists, local events, or whatever.

What I don't understand is why most newspapers don't have a strip like Penn's Place. Everybody loves humor that makes reference to your own 'hood, and if it is done reasonably well it can easily become 'water-cooler' fodder. That translates to circulation building, which frankly is more than you can say for all that plain vanilla syndicated content on the comics pages. Nobody makes sure to read Garfield every morning before they go to work, in case the strip comes up in the morning chats. I can definitely see strips like Penn's Place being 'appointment-reading'. Wake up, newspaper editors!

Penns' Place had a nice 4+ year run before Signe pulled the plug on February 14 2016. She bowed out with a valentine message to her readers, which led to a long string of Facebook replies from disappointed fans.

Thanks very much to Mark Johnson who supplied the sample tearsheets of Penn 's Place.

Comments:
There was a time when many papers, if they were big enough, might run a local only Sunday strip, but this is an extremely rare practice in the last fifty years. With the dying off of comic sections at all, Maybe Penn's Place could be the last one.
The statue of William Penn atop Philadelphia's wonderfully grotesque city hall figures prominetly in the strip, and the 1 Feb 15 sample happens to be the focus of the gag. 117 years earlier, the same statue was shown howling in laughter on the cover of the very first Sunday comic section in the city of brotherly love, published in the Philadelphia Press.