Obscurity of the Day: Bessie Busybody 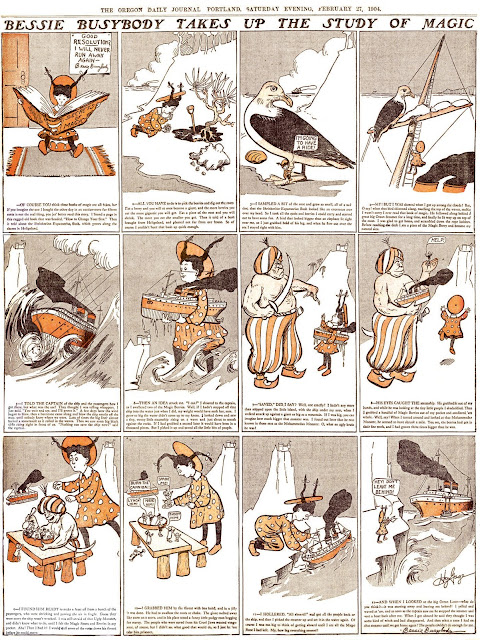 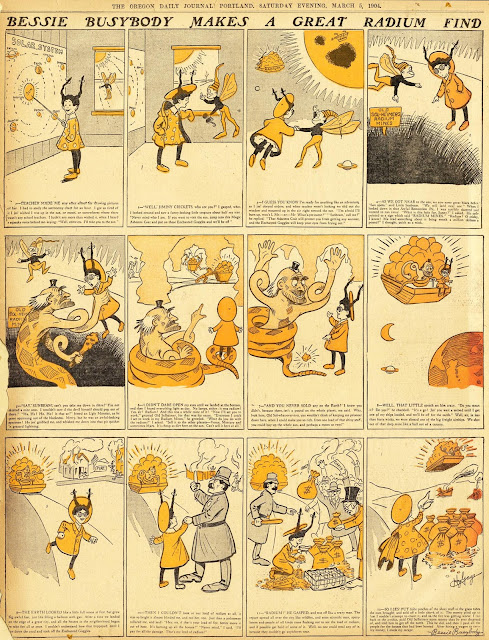 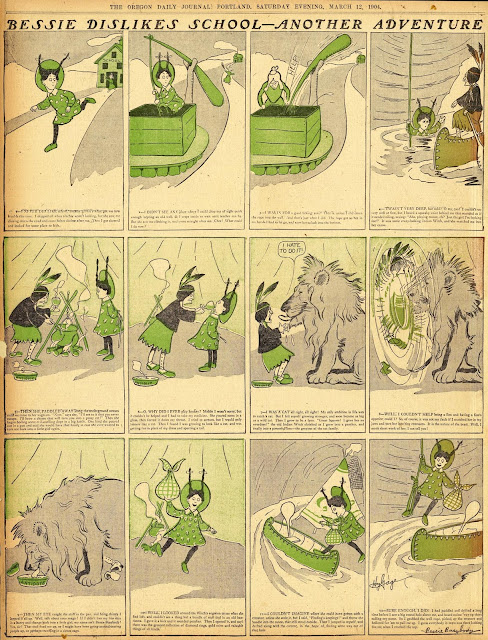 Bessie Busybody is I guess what you'd call a double obscurity. It was a feature of the Philadelphia North American syndicate in 1903-04, so that's already plenty obscure. The double comes in with the fact that the North American itself did not run this strip, but only offered it to some of their small client list of newspapers, where it was an option they could run instead of Fatty Felix and the Flipp Boys. But don't ask me why their clients needed a substitute for Fatty Felix -- since that was essentially the North American's headline strip, why would clients want something else instead?

That mystery aside, this series by Hy Gage, he of the funny name and the extremely naive cartooning style, is a real delight. When it began on October 25 1903 it looked like it was going to be yet another totally forgettable strip about a naughty child. However, Gage soon got completely carried away with his character, and had her starring in adventures in the deep sea, outer space, and in bizarre fantasy lands. His undersea adventure was even sort of a continued story from one Sunday to the next, a rarity this early.

Gage mined some of his ideas from the writings of Lewis Carroll and L. Frank Baum, but brought plenty of his own creativity into play. A slight bit of -- let us say inspiration -- aside, Gage really pulled out all the stops and gave readers a whole lot of bang for their pennies in these joyously wild  full page strips. How very odd that this series, which I think  is some of Hy Gage's most interesting work, should not have even seen the light of day on his home turf in the Philadelphia North American.

Bessie Busybody is known to have run until at least the end of June 1904, and possibly longer.

Thanks very much to Cole Johnson, who alerted me to this delightful double obscurity, and provided the scans.

Comments:
Hi Alan - Gage died in 1971. What I wonder about him and lots of other cartoonists is, how did they support themselves in all the years where they weren't working on strips? Gage had something like 60 years left after his strips...

Hi Brad -- According to Alex Jay's Ink-Slinger Profile, he was working at the Philadelphia Bulletin and doing a little comic book work as late as the 1940s. That would have been when he was pushing 70. I think after that he'd earned his retirement. -- Allan

Hy gage was the editorial cartoonist for the Philadelphia EVENING BULLETIN until January 1942, when F.O. Alexander spelled him. Alex worked alongside Gage for a few weeks,and Alex told me the old man intended on retiring.
It's true the Bessie Busybody series was not in the NORTH AMERICAN, but outside of the fact that the OREGON JOURNAL fielded a lot of NA Sunday strips, and Gage was based in Philly, how do we know this title was a NA release? It has no imprint. Maybe Gage was self-syndicating. Besides, if you will recall the configuration of a NA section, Fatty Felix in 1904 is offered as a half page only, usually coupled with the NA's longest running series, Muggsy.

Hi Mark --
I think the appearance of Bessie Busybody along with an otherwise full menu of PNA material in the Oregon Journal cannot be a coincidence. Circumstantial evidence, yes, but pretty darn convincing to me. Granted, I'd love to have a second paper with which to back up my claim, but beggars etc etc.

As for your observation that Fatty Felix was a half by this time, that's a very good point. Unfortunately my North American index is some 2000 miles away from my current location, so I can't compare it to the OJ to see what else was missing from their section. Any ideas?
--Allan

Here's the breakdown of a North American section from this period from my own notes:(note the OREGON JOURNAL ran their comic section on Saturday)

PHILADELPHIA NORTH AMERICAN
28 February 1904
The Up-To-Date railroad terminal as pictured by McDougall(Full)
Willie makes a water motor for the sewing machine (by Crane)(½)
Speaking of ancestors (Mamma's "Uncle Tom"/ Cowboy) (by Chas. Reese) (½)
Fatty Didn't know the Chief was behind him, but the Flipps did (By McDougall (½)
Muggsy, on Board Ship, breaks up a crooked card game (By Crane) (½)

McDougall's full-pager, which was sometimes locally-oriented, is always missing, so that makes sense.

The McDougall full page anthology series was sometimes syndicated by itself, such as in the CALGARY HERALD and the RICHMOND TIMES, where they might even be seen in the mag section.

I don't recall any specifically Philly-oriented one in either of McDougall's anothology series, the second was around 1908. Some full paged series appeared between them, like Peck's Bad Boy and Handsome Hawtrey, etc.
From their first section in 1901, it looked like the NA was offering a modern syndicated list of features. THE BOSTON SUNDAY POST ran the NA material starting only a few weeks after it's debut.