Obscurity of the Day: The Omnibus Boy 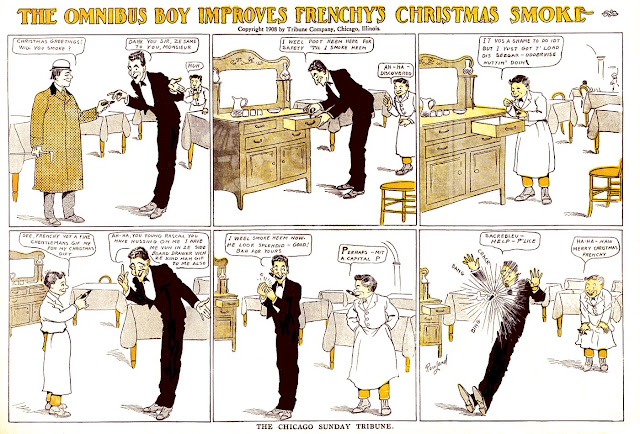 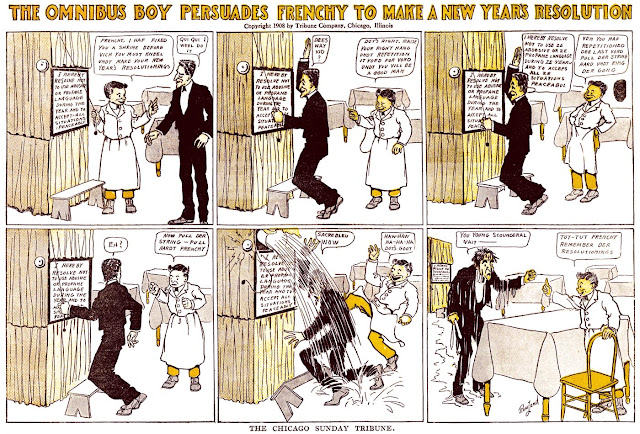 Here at Stripper's Guide we love etymology, so while we have a pretty lackluster comic strip to discuss today, we are delighted to chew on a wonderful archaic term.

"Omnibus Boy" may sound like one of the lesser members of the Legion of Super-Heroes, but it turns out it is actually the original version of a term with which we are all familiar today. The restaurant employee now known as a busboy, that guy in the filthy smock who picks up your dirty dishes and runs them back to the kitchen to be washed, was first known in the 19th century as an omnibus boy. Busboy is a modern contraction of that term. The word 'omnibus' means, of course, a combination of many things. The omnibus boy in a restaurant had lots of different jobs -- cleaning tables, setting tables, carting dishes. Back in the 19th century they often had additional duties, since waiters in better restaurants rarely ventured back into the kitchen. The omnibus boy therefore received orders from the waiter and ferried them to the kitchen, and otherwise operated as the waiter's stand-in with the workers out back. Sometimes omnibus boys were not even paid by the restaurant, but were in the employ of the waiter.

The term 'omnibus boy' waned as the 20th century got underway in favor of the more concise 'busboy.' I thought perhaps The Omnibus Boy, which ran in the Chicago Tribune from November 8 1908 to February 28 1909, represented the term's dying gasp, but an online newspaper search reveals that while seldom seen, the term was used as late as 1925. On the other hand, the earliest I could find the contracted version of the term was in 1893.

The comic strip series itself is less interesting than the etymology. It features a German busboy, a French waiter, and the gags are just an endless series of highly orthodox prank-pulling. The only glimmer of interest comes from the creator, who signed himself just "Rowland." While not much of a writer, he is a reasonably good cartoonist. Unfortunately he never signs his full name, he never did another series, and a search of the Chicago Tribune for his name reveals nothing about this mystery man. Not that that slowed down master sleuth Alex Jay, who will reveal his identity tomorrow.