Obscurity of the Day: The Sporting Thing 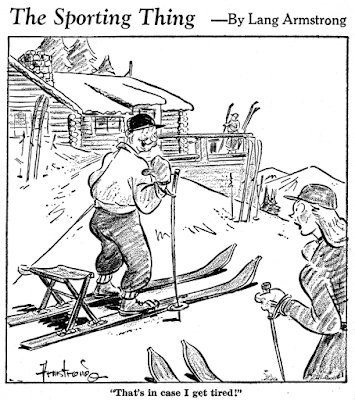 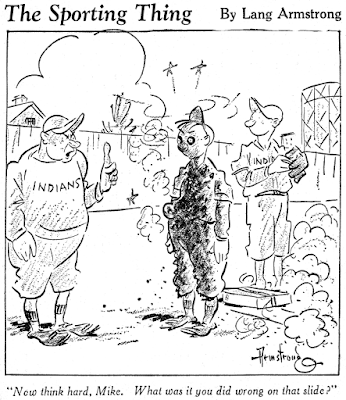 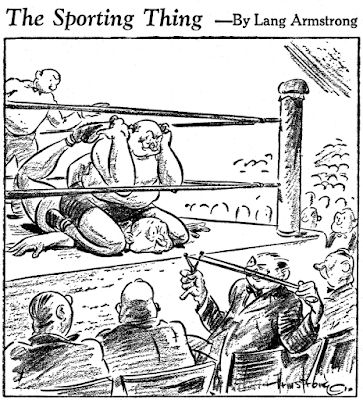 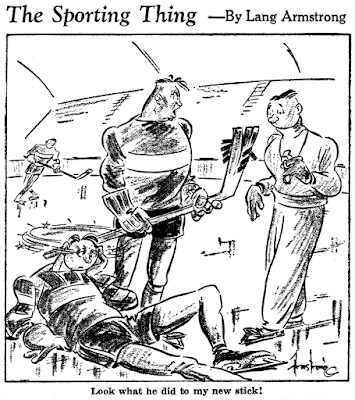 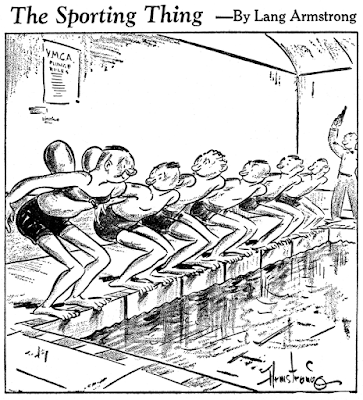 I tell ya, it's tough being a half-wit. I've long admired the beautiful brush-work and liveliness of the art on The Sporting Thing. I marvelled over how the same guy who was such a consummate animal artist on Uncle Wiggily could also have such a deft touch with more mature humor and in such a very different style! Of course, there's a good reason for that. They're two different guys. The creator of The Sporting Thing is Lang Armstrong, and the illustrator famed for Uncle Wiggily is Lang Campbell. You can imagine how balled up I get with all the Williamses and Smiths in the cartooning fraternity.

Anyhow, let us not focus on my stupidity, but rather the underappreciated wonder that is the work of Lang Armstrong. The Sporting Thing debuted via Bell Syndicate around September 1939*, and was Armstrong's first syndicated work. He had been working at the Spokane Chronicle since the late 1920s, and had a local daily panel there titled Stuff and Things that had been running since 1937. They were both gag panels, but The Sporting Thing was (obviously) sports-oriented, while Stuff and Things used any general gags he could come up with.

Despite the excellent work he did on The Sporting Thing, which featured lovely grease-crayon cartoons and very playful gags, the panel did not really catch on. As natural as it seems to have a daily sport-oriented cartoon for a newspaper's sports page, the idea never seemed to really take hold. I'm guessing that the sports editor would rather run an extra action photo than a cartoon in his limited space. The few papers that did take The Sporting Thing almost all ran the panel ROP, fitting it in if and when they saw fit.

In December 1945, Bell Syndicate** finally accepted Armstrong's Stuff and Things panel for syndication, and around that time reduced Armstrong's space, previously two columns, to a single column width for each feature. Considering that a main attraction with his work was the lush grease-pencil, that was a really dumb move. His panels now looked totally generic, and destroyed the nice playful feel.

Armstrong gamely produced both panels until sometime around March 1946. Neither panel was by any means setting the world on fire, so he opted to continue only Stuff and Things, retiring The Sporting Thing after about six years in the big leagues. Stuff and Things didn't outlast it by long, ending in December 1946.

For some samples of Stuff and Things, and an obit of Armstrong, go check out Ger Appeldoorn's post at The Fabulous Fifties.

* the Minneapolis Tribune advertised that the panel would begin there on August 14 1939, but then they never actually ended up running it. So, huh?

** In my book I credit not Bell Syndicate but Lloyd James Williams for the syndication. That is because I saw his copyright on a panel, while Bell Syndicate never to my knowledge put their copyright slug on it ever. However, Bell was the distributor of record in the 1945 E&P listing, so I'm guessing maybe Mr. Williams was some sort of impresario, a la Stephen Slesinger. In 1939, the panel's only other appearance in the E&P listings, only its Canadian distributor, Dominion News Bureau, was listed.