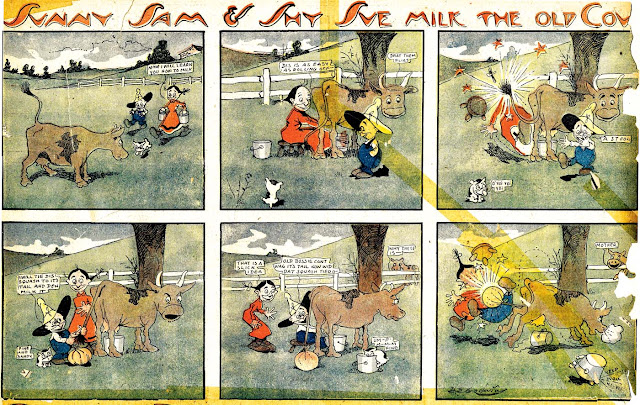 The strip's gags took place on a farm in Egg Hollow, where the kids were usually playing Katzenjammer-style tricks on the farmer, named Uncle Hi. Why the Inquirer had two Katzenjammer wanna-be strips (Fineheimer Twins was the other one) I don't know, but maybe because one was done with German accents and the other with homegrown rustics, it didn't seem like duplication of effort.

Though H.E. Godwin's work sometimes has a bit of fun charm, his efforts on this series are appallingly bad. Most of the tricks the kids play are so clumsily set up that readers are left with no clue what in the world is going on. Of course, it really matters little, because in every case, the big pay-off is always that all hell breaks loose and someone suffers grievous injury. The end.

Comments:
A lot of the early Inquirer series were like this, there were some name artists there like Dwiggins or Marriner,and some of their stars would become more sophisticated and become giants of comicdom after they left the 'Inky' like Sidney Smith but most were ametuerish, and had a sameness to them. You can always tell an early Inquirer section by their strange coloring. They seemed to have some rich, attractive colors that printed well, and others that were consistantly smeary and uneven.
Cole was always unsure of the exact date when the Inky went from just a local section to a syndicated one, he figured the structure of the section went from an anything goes in sizes and formats to a ridged uniform half page only in early 1903 may have indicated when they began, yet couldn't find a paper that took Inky material before 1905. (St. Louis Globe-Democrat). have any ideas?

Hi Mark --
No, in my collection the best I can do is also 1905 -- my few samples of the early syndicated version coming from the Boston Herald. They took the Inquirer material in between one of their spates of producing a homegrown section.