Obscurity of the Day: The Bad Dream that Made Bill a Better Boy 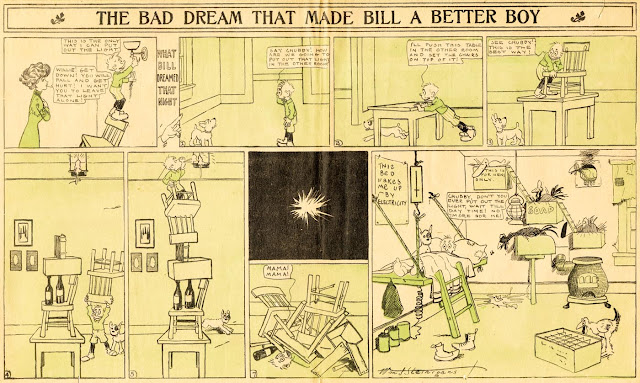 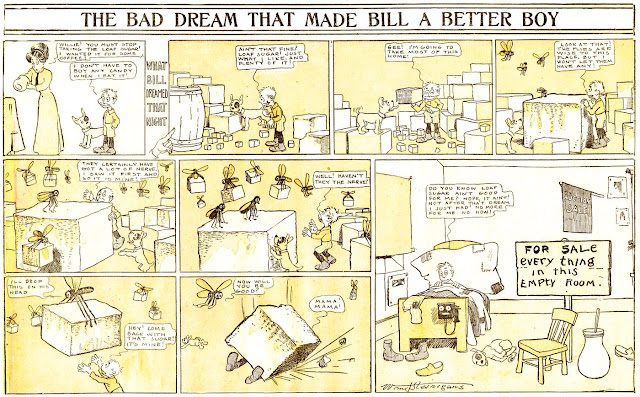 William Steinigans was a fine cartoonist who is most remembered for his dog strips, but in fact his longest running series was The Bad Dream that Made Bill a Better Boy, in which the ubiquitous dogs were mere bit players. In this strip a kid, Bill, has wacky dreams from which he invariably wakes with a resolution to be a "better boy". The dream fantasy elements are often derivative of McCay's Dream of the Rarebit Fiend, which pre-dates this strip by a year. On the other hand, the Steinigans strip began earlier than another very famous dream strip by McCay, Little Nemo in Slumberland, by a few months, and the comparison to that strip is obvious. So if you condemn Steinigans for copying McCay, you can say McCay returned the favor with his own bout of plagiarism.

In my book I quote Ken Barker's New York World index, saying that the initial strip, which ran on August 13 1905, was penned by Gene Carr. In doing further research, I find this is not the case; Steinigians authored the strip from the beginning. I can see how Barker got fooled, though, because the panel in which Steinigans signed the strip turns into a black blob on microfilm. Barker saw that the rest of the page was by Carr, and assumed he was responsible for the 'Bill' strip as well.

The Bad Dream that Made Bill a Better Boy ran in the New York World's Sunday comic section on a regular basis for just short of six years, ending on April 16 1911. Although the strip never was anywhere near as stunningly inventive as McCay's dream strips, it was nevertheless a cut above most of the strips running in the Sunday sections of those days -- at least it wasn't about prank-pulling or people with 'funny' accents.

My favorite aspect of the strip was that Bill's bedroom would be shown as decorated in some wild manner at the end of each strip. While Steinigans' dream sequences weren't really showstoppers, Bill's room is bizarrely different in each strip, which adds a delightful extra gag and visual candy in what would otherwise be a very repetitive last panel.

In fact, the first strip published on August, 13 1905 is signed by CARR ; you can see that on the same page (page 3 of the Funnies Supplement), he drew Romeo on three strips (Romeo You can’t hang him) and on the same page, the very first strip of the series, called as « A Bad dream that made Bill a better boy » duly signed and with the same graphic style.
The next week, Steinigans took over on the series
Best regards !,
Pierre-Henry LENFANT in Lomé TOGO
pictures will follow by email