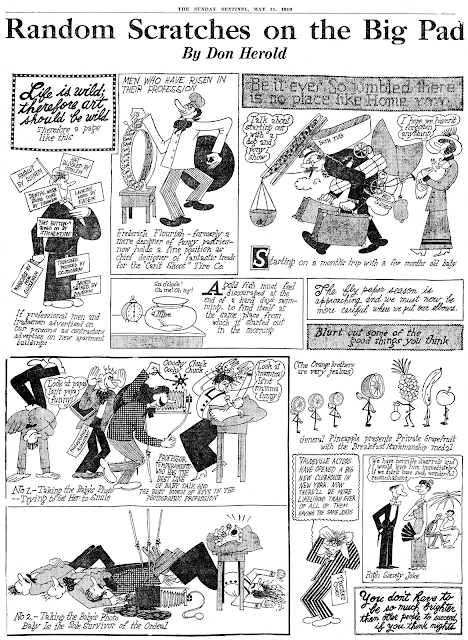 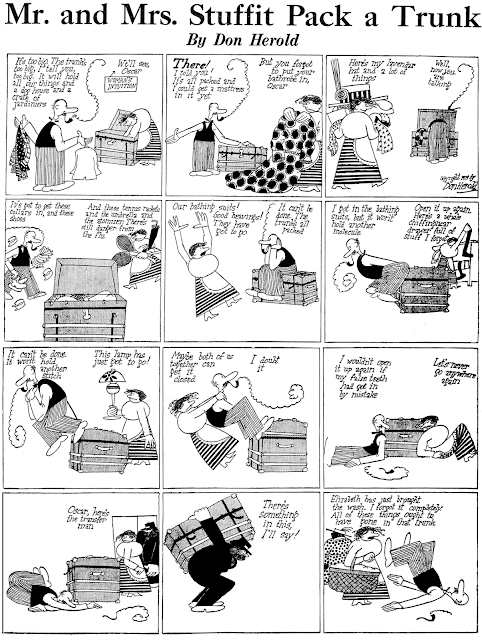 In addition to a long string of successful humor books, the great Don Herold did a lot of newspaper work. Problem for me here at Stripper's Guide is that Mr. Herold often wrote illustrated columns, which don't fall in our purview. Therefore, a decade or so into this blog and I still haven't had much of a chance to wax rhapsodic over one of the truly great cartoonists.

Herold is one of those guys who just plain draws funny. Along with the likes of VIP and Milt Gross, who can make you crack up even before reading the gag, Herold can take class-B material and turn it into the humor event of the week. And a lot of Herold's material was definitely class-A stuff, so that is quite the powerful 1-2 punch. Just look at the second sample above, in which Herold trots out one of the creakiest old jokes; so ancient that the original may well have been drawn with a stylus on clay. His deceptively simple drawings, which at first blush may seem almost childlike, have more energy, grace and humor than all the noodling and anatomical rendering in the world could accomplish.

The page's subject was whatever Herold happened to dream up in any given week -- there were no continuing characters. There was also no unifying title, just a different headline each week. The page sometimes collected a group of vignettes like our upper sample, sometimes was a full-page strip as in the lower one. Although I'm sure it would look spectacular in color, as far as I know it only ran in black and white.

I believe this Sunday series, which ran from September 29 1918 to July 11 1920, is Herold's first of only two purely cartoon series he did for newspapers. It was syndicated while Herold was in the employ of the Indianapolis Star, and I'm not sure if the Star did the syndication or if Herold sold it himself. Herold's copyright is prominently lettered onto each page, so maybe he did self-syndicate; he was a good businessman so it's a definite possibility. The Star itself stopped running the page in January 1920, and the page kept going for another six months in syndication, so that's another bit of evidence that points to self-syndication.

Thanks to Cole Johnson for the scans of the samples.