Obscurity of the Day: That Reminds Me 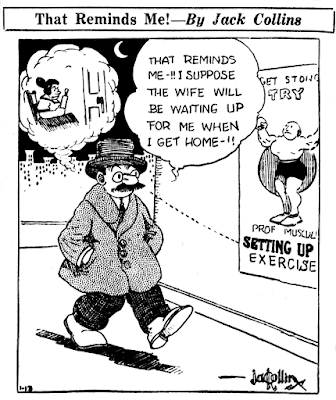 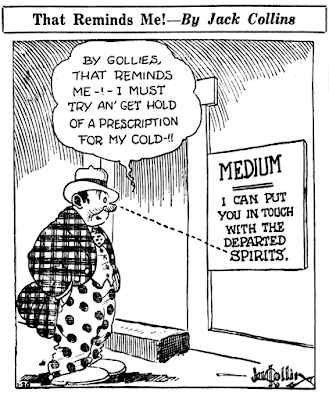 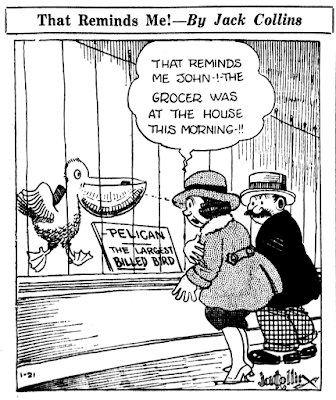 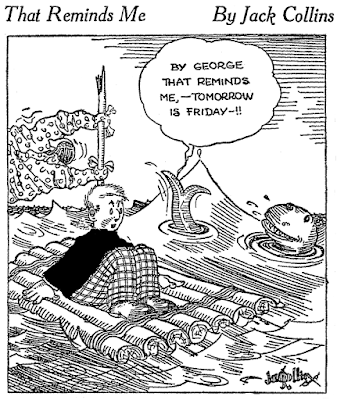 I get a bit of a kick out of cartoonists who evidently work harder on their signatures than their actual cartoon. Jack Collins' cartooning looks to be straight out of a correspondence school, but man that is one finely wrought signature.

To my knowledge Collins only has one syndicated feature to his credit, and he pretty much guaranteed it wouldn't last very long. His panel, That Reminds Me, depends for its humor on delivering the same punchline every single day. An incredibly creative cartoonist can get away with that for quite awhile, but they need to show WAY more ingenuity to keep such a feature fresh than Collins does (see And the Worst is Yet to Come for an example that actually works).

In my book I say that this feature was penned for the Brooklyn Eagle, but I was wrong. It was actually distributed by Philadelphia's Ledger Syndicate. The panel began on June 13 1921, and I can trace it now as far as December 1922, but by then I can only find it in the L.A. Times, which cuts off the dates on the panel, and runs it at least  little late, so I cannot offer an exact end date.

Comments:
That has got to be one of the least clever cartoon features I've ever seen!
PS _ I owe you an email. I'll write it as soon as my work deadline is over.