Obscurity of the Day: The Bear Boys 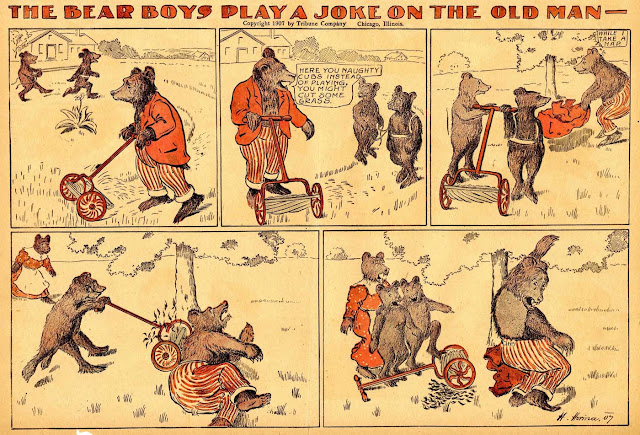 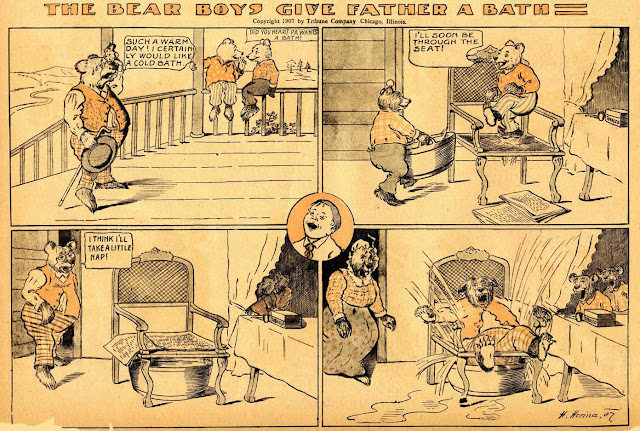 With The Bear Boys we've almost run the entire gamut on Hans Horina's comics for the Chicago Tribune (only one left that hasn't made an appearance yet on Stripper's Guide). The Bear Boys  is actually a rejiggering of The Rhinoceros Boys, which was a Katzenjammer Kids rip-off with the nod to originality being that instead of human kids, the little rascals are, of all things, rhinos.

The Rhinoceros Boys ran in the Tribune Sunday section from January 27 to June 2 1907. On the next Sunday the rhinos had transmogrified into bears. Why? Blame the story about Teddy Roosevelt taking pity (of a very minor sort) on an old injured bear while on one of his game hunts. Publicity about the event led to a national bear mania, and I guess Horina figured it was about time he climbed on board.

The Bear Boys ran from June 9 to August 25 1907*, so obviously his Katzie-inspired bears didn't make an impression on Tribune readers. Thanks to Cole Johnson for the scans.

* the end date could be off by a little -- the Chicago Tribune archive I indexed to get these dates had been cherry-picked for Lyonel Feininger comics prior to it being microfilmed, so some pages that may have had this strip have been lost.

Comments:
It looks like that August 25, 1907 date is accurate. The Tribute archives shows a new Hans Horina comic, with an elephant on the receiving end of slapstick provided by a lion.

That ran through November 3, and was replaced by another Hans Horina comic about "Professor Edison Dodger", who was the designated slapstick target for that run.