Many years ago, I posted an Obscurity of the Day about Chic Jackson's comic strip Roger Bean. The strip was created for the Indianapolis Star in 1913, and received a very light distribution to other newspapers during its 21-year life. In my admittedly spotty reading of the strip I came away with the conclusion that those Hoosiers are willing to put up with some powerfully bad art in trade for some locally produced humor. I also called into question a number of points made in the comic strip reference books.

It's a decade later, and that post has accrued a number of pretty interesting comments, some of which rightly take me to task for errors and omissions. Now that the Indianapolis Star is available through newspapers.com, its about time for me to make some corrections, and while I'm at it, pass along some of the heartfelt eulogies that ran in the Star when Jackson suddenly died in 1934 (come back on Monday for that post).

Some new and corrected info. Warning, number three is a doozy if you are a Gasoline Alley fan:


1) I then said that I could find no trace of there ever being a Roger Bean Coffee. Since then I have indeed found that the coffee brand did exist, and seems to have debuted on store shelves in late 1915. The coffee brand, which was local to Indiana, ceases to be advertised in early 1923. 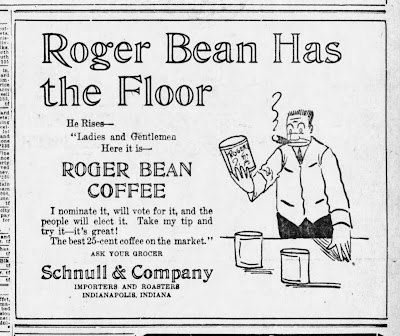 2) I said that the strip ended on September 23 1933, based on the run in the Chicago Daily News. Turns out that the strip ran in its home paper and a few syndicated outlets right through Jackson's death, and ended with the last strips he'd completed on the day of his death. The final strip actually ran on June 23 1934.

Aging characters was thought to be an innovation created in Gasoline Alley, but evidently Frank King was not the first to come up with that idea. That, however, is not the only parallel between Gasoline Alley and Roger Bean. And here it gets a bit uncomfortable. The Bean's first child, Woody, was an orphan that they found in a basket on their doorstep in the middle of the night. In 1914.

I'm not going to say it, but now we're all thinking it. My admiration for Frank King knows no bounds, but this is very unsettling. Evidently Jackson was too nice a guy to make a public issue of it, but ...

Comments:
The abandoned baby on the doorstep was a long-established cliche; don't know if it was ever that common in real life (one hopes not, but times were even tougher for a single mother). In pop culture usage it was sometimes implied or stated that a male in the household was responsible; otherwise it was an easy device to add a child to a story without the fuss or possible controversy of a pregnancy.

To give an idea of its staying power, "Pearls Before Swine" sometimes has the cartoonist trying to wheedle into his wife's good graces by presenting himself as a doorstep baby.

As the great-granddaughter of Chic Jackson, I can't tell you how cool it is to run across your article! Although he died long before I was born, I feel like I still got to know him thru my grandfather's stories about him. Great-grandpa Chic had painted illustrations of some of his Roger Bean characters that were framed and hanging in the den and living room in my grandparents home, and I have a copy of a hardcover book that is a collection of some of his strips. I also inherited the small, wooden drafting table he used for his art: scarred, ink-stained and absolutely wonderful. I'm a graphic designer and (occasional) creative writer, and like to think some of my talent was genetically passed down from my artistic ancestor who also loved to draw and tell stories. :) -- Kristin Jackson