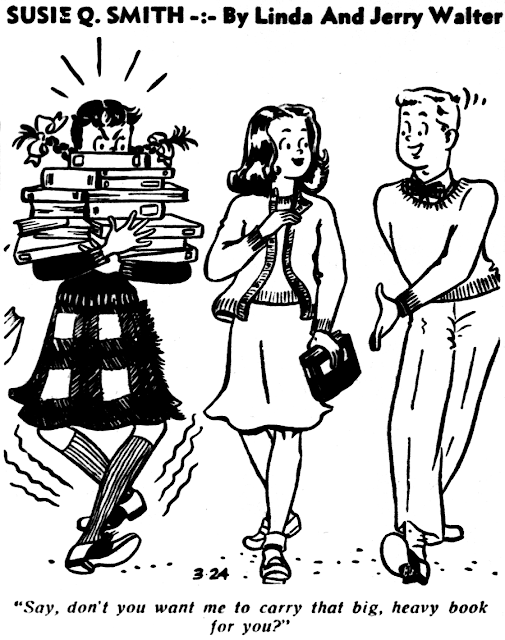 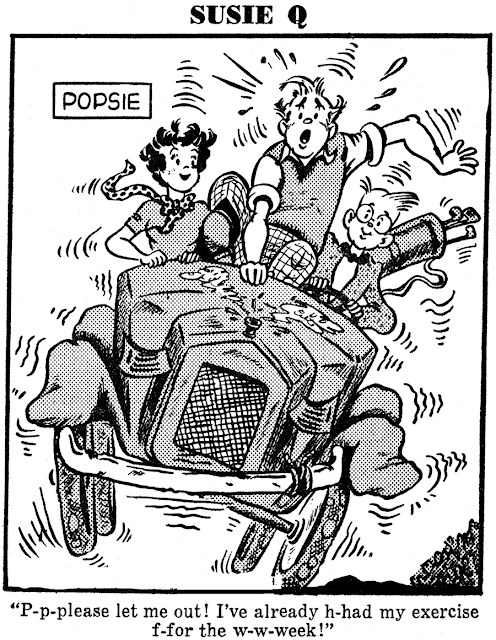 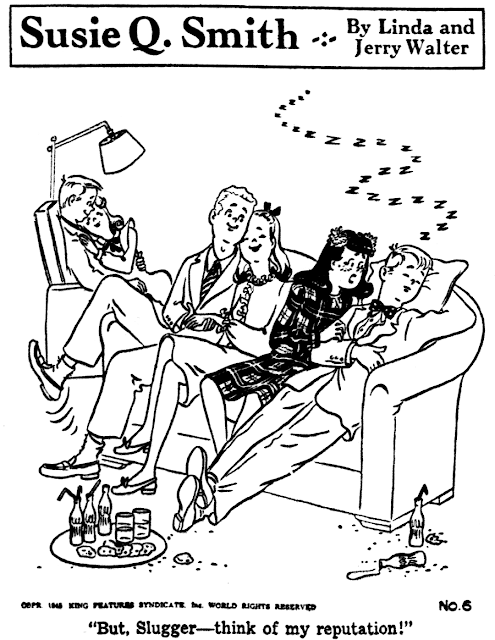 We've discussed the Walters, the dynamic married cartooning duo, before here on Stripper's Guide. Both Jellybean Jones and The Lively Ones failed to make any impression at all on newspaper readers, but Susie Q. Smith, their most successful outing, actually did pretty well -- it is only an obscurity in that it has fallen off the cultural radar completely since its demise.

The Linda and Jerry Walter trilogy of syndicated features forms a neat triptych -- one about a little kid, one about a teenager, and one about senior citizens. Somehow the Walters failed only to hit on that middle part of life, adulthood.  The other interesting commonality is that all three features were daily panels (to which a glance immediately upward on this page would seem to disagree, but bear with me).

Susie Q. Smith, whose title was often abbreviated by lazy typesetters as just Susie Q, debuted with King Features on the first day of 1945, and garnered enough clients to be considered at least a modest success. The panel about a teenage girl hit all the familiar hot buttons -- dating, school, dealing with parents and siblings. What set it apart, at least slightly, was that it was unusually frank about Susie's romantic life. Susie and her pals are often depicted in the midst of communal make-out sessions, something you'd rarely if ever see in the typically modest teenage features like Harold Teen, Aggie Mack and the like. For some reason the newspaper comics page could not rise to the level of frankness of popular movies and radio shows, and teens in the newspaper were, other than Susie, almost embarrassingly unsexual.

In a very odd turn of events, in 1953 the Walters chose to leave King Features behind and hitch their wagon at the McNaught Syndicate. (King is notoriously lax about cancelling underperforming features, so I'd be surprised if the axe came down -- I'm convinced it was the Walters who made the move.) Rejecting the sales powerhouse of Hearst for the comparatively sleepy environs of McNaught seems strange, but the Walters shook things up in an even more unusual way by changing their daily panel into a comic strip at the same time. The combination of a new syndicate and a new format actually seemed to click with newspaper editors. The feature added clients and became more visible  in the next few years than at any other time in its history. Unfortunately for the Walters the honeymoon didn't last and clients began to fall away. Perhaps the juggernaut of the Archie strip, which tread the same ground but with considerably more pizazz, was too much competition. Susie Q. Smith was cancelled on November 28 1959

Comments:
How common is it for a comic to switch from a panel format to strip format?

The only other example I can think of is "Andy Capp", although by the time the comic made it to the US papers it switched to strip format.

It's a pretty darn rare event, Charles. I have no simple way of looking that information up in my database, but I'd lay odds that if we limit our data set to normal syndicated features, the number would be in single digits.

Just checked "Walt before Skeezix" and noted that "Gasoline Alley" started as a panel and quickly began flip-flopping between panel and strip.

Also, it seems the majority of panels turn to strips on Sundays (a handful would do a few unrelated gags to offer a flexible format).