Obscurity of the Day: The Economical Husband 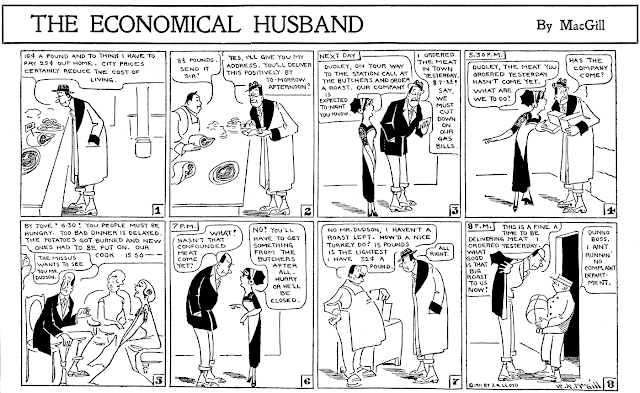 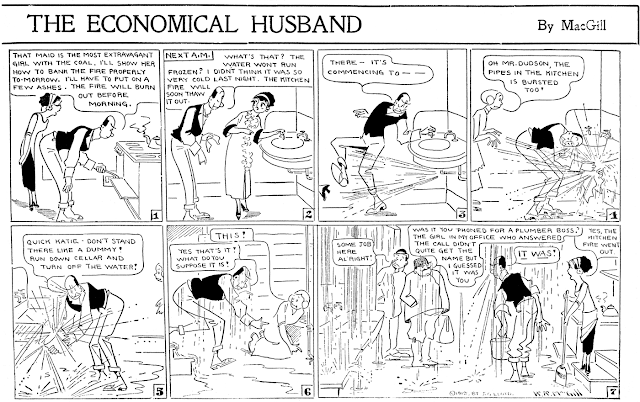 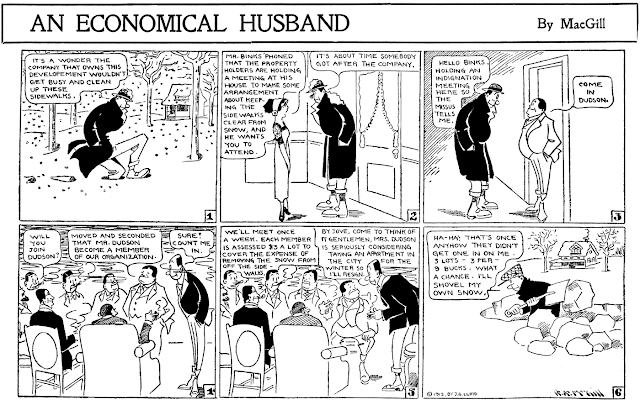 H.A. MacGill's fame is not secured by the fact that he was the cartoonist on the first true daily comic strip*, nor is it because of his appealing and unique art style. No, those few who do remember him tend to remember only that his comic strips, in particular the long running Hall Room Boys/Percy and Ferdie, were ridiculously text-heavy. In fact most of McGill's strips take the better part of a cup of coffee to read, and probably took him longer to letter than to draw.

MacGill's weekday strip The Economical Husband is no exception to the rule, though I've tried to spare you by picking some less text-heavy examples. The strip concerns a skinflint who ends up in trouble because of his frugal ways. The strip focuses also on his wife, though she seems to have no noticeable personality. Despite her often taking the brunt of his penny-wise ways, she rarely offers any opinion on the matter.

MacGill produced The Economical Husband on a stint at the New York Evening Globe, where it ran from August 21 1911 to December 1 1913**, mostly alternating space with his Hall-Room Boys, which he brought there after its long run with Hearst. All of MacGill's work at the Globe was syndicated through Associated Newspapers. The Globe assigned copyright to MacGill's strips not to the newspaper, but to H.P. Staton, the art director of the paper from 1904-1912, and then to J.G. Lloyd, whose role at the Globe is unknown but presumably he took over as art director***.

* Source: my article in Hogan's Alley issue #12
** Source: Jeffrey Lindenblatt's index of the New York Evening Globe.
*** Alex Jay has found a citation that he was the private secretary to the Globe's publisher, and another source stating that he was a "member of the editorial staff."

Comments:
Have you heard, or know anything about the TRADER HORN newspaper strip, illustrated by Paul Berdanier? It ran in THE NEW YORK AMERICAN and other Hearst newspapers. Some of Berdanier's illustrations were used in the Simon & Shuster edition of THE BOY'S TRADER HORN by Kenneth Payson Kempton. Based on Berdanier's art for TRADER HORN he was once considered to take over the Tarzan newspaper strip and did illustrate TANAR OF PELLUCIDAR by Burroughs.

Hi Robert --
No I haven't. The microfilm record of the NY American is spotty, and that feature may well have fallen through the cracks. Anyone seen this series?