Obscurity of the Day: Simple Beasts 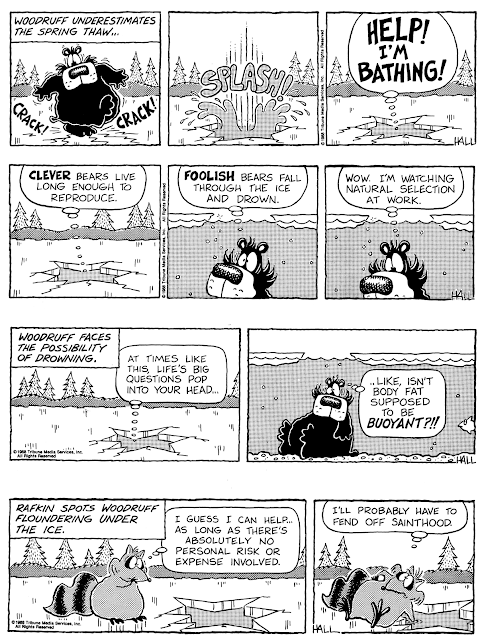 Simple Beasts, a daily and Sunday strip penned by Doug Hall and distributed by Tribune Media Services, came and went in a little over a year and a half. The comic strip about a group of forest animals was notably gentle, good-natured and cute without veering into saccharine territory. The gag-writing was quite snappy, and if I'd been exposed to it at the time, I'm sure I'd have looked forward to its daily appearance in my paper.

Doug Hall had tried a number of different concepts on the syndicates, but it was when he signed a contract with impresario Lew Little, a master at selling new features, that he finally landed a syndicate contract. Little offered Hall the editorial oversight that he needed to hone his writing, and reworked the feature from a panel into a strip to make it more marketable.

The Deseret News was one of the strip's initial subscribers, and they printed this syndicate promo article about the strip on April 4 1988, the first day of the new strip:

Drawn by Doug Hall, 31, the strip is billed as a "simple" humor comic that is as entertaining as it is natural. The strip is set in the "Great North Woods," and the characters are described by the artist as lovable and loving animals.

Woodruff the bear is the star. He loves to eat, sleep and watch people.  Supporting roles are provided by a squirrel, Rafkind, (who loves to dive into dumpsters and listen to hard rock) and Teether Bob and Teether Lou who are busy beavers raising their family. Clarissa, another bear, is constantly rejecting Woodruff's affections, and she hopes to be discovered by Hollywood or National Geographic. The Rens, a dazed flock of birds who struggle through life without a leader, round out the strip's characters.

"Simple Beasts" will show interaction of the animals with man and his complex society. Hall said the strip will provide the real story on animal courtship, shedding and the mysteries of plastic garbage cans.

Hall says he is a nature lover and hopes that the ever-increasing interest in nature, wildlife and the environment will make "Simple Beasts" popular. A native of Indiana and graduate of Anderson College, Hall is a former magazine editor. He has done comic strips for his high school and college newspapers, as well as for the "The New Yorker" and "The Saturday Evening Post." He loves cycling, backpacking and canoeing and currently lives in Maryland.

The Deseret News editorial staff and readers evidently liked Simple Beasts very much, but sadly few other papers had shown interest. When the strip was cancelled, they ran the following farewell to it on December 26 1989:

The Deseret News is sad to report that the "Simple Beasts" comic strip will end after Saturday's, Dec. 30, installment.

At the request of its cartoonist, Doug Hall, "Simple Beasts" will be discontinued. "Phipps," a new comic strip from Newspaper Enterprise Association and United Media Syndicate, will replace "Beasts" on Jan. 1.

Hall said earlier in the month that he has been extremely disappointed that so many newspapers did not give "Woodruff" and friends a chance to catch on with readers and instead dropped his comic after only a few weeks or months - in favor of publishing other new comic strips.

Since only a few newspapers had retained "Beasts," Hall was likely receiving little money for his cartooning efforts and so the move was probably simply a financial decision on his part. (Each newspaper that publishes a comic strip pays a weekly fee to the syndicate that distributes it and the syndicate in turn, pays the cartoonist on the basis of how many newspapers carry the strip.)

"Simple Beasts" started April 4, 1988 and was a good family strip that had seemed to catch on with many Deseret News readers.

Comments:
Hope you'll tell us about "Phipps". Never hear of that one before!

Phipps was a good pantomime strip.