Obscurity of the Day: Benji 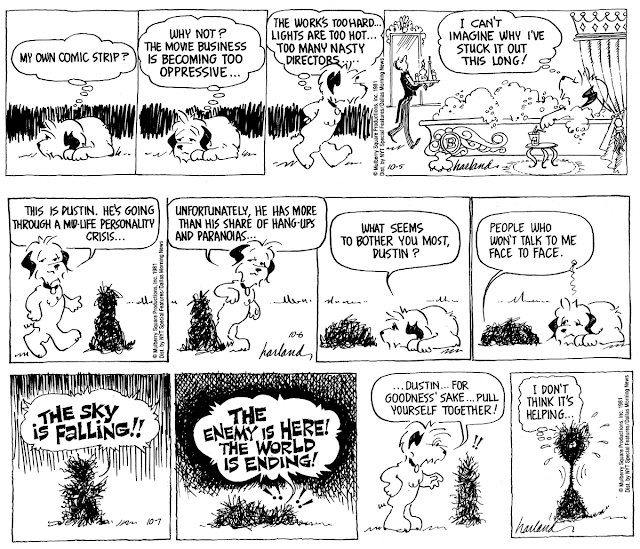 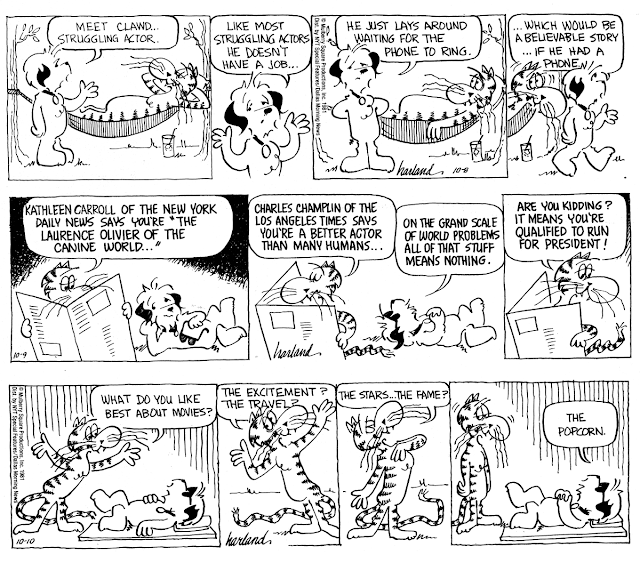 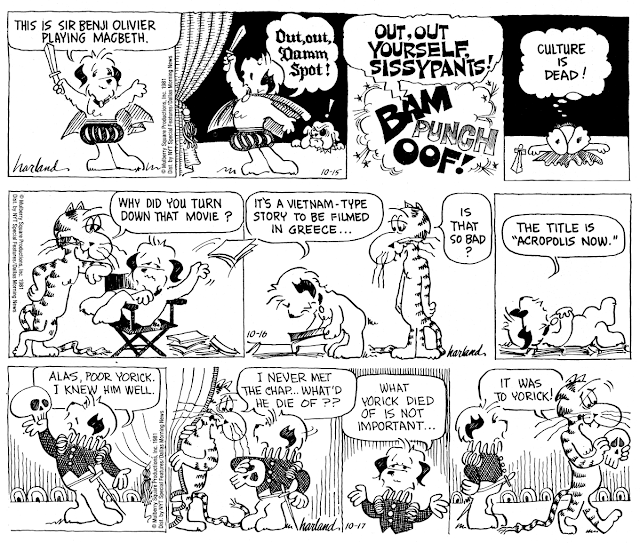 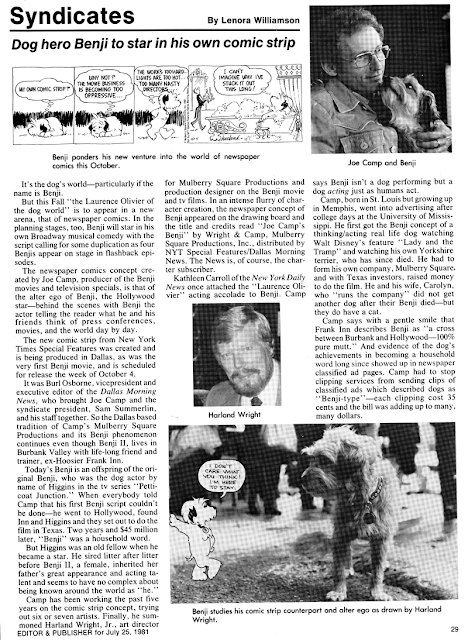 Animal lover and television director/producer Joe Camp decided in the early 1970s to combine his two passions. He tried to sell Hollywood on the idea of a family-friendly movie about a scruffy little dog and had every door slammed on him. Not to be denied, Camp rounded up his own financing and shot the film Benji on a shoestring. The movie became a monster hit, grossing $45 million, and that scruffy mutt became a star.

More successful movies and TV appearances ensued, and in 1981 Camp was approached about the possibility of a Benji newspaper comic strip.  The realization of the strip took three companies -- Camp's own Mulberry Square Productions, the Dallas Morning News (the publisher lived next door to Camp), and New York Times Special Features. The Times had recently dipped a toe into the comic strip syndication world with very modest success, and Benji was destined to be the final feature introduced by them.

Harland Wright, art director at Mulberry Square Productions, was chosen to handle the art on the strip, with Camp writing the gags himself. Wright was a capable cartoonist, but his sense of character design was a bit bizarre. Benji himself looks okay, but his co-stars are straight out of a freak show. Dustin the dog is drawn as a collection of random squiggles, and Clawd is a cat with a monstrous growth on his face (is it a nose? a fat lip? elephantitis? who knows).

The daily-only strip debuted on October 5 1981 in a very small number of papers (perhaps less than fifteen), but Camp was no stranger to swimming against the tide, so the strip soldiered forth.

Harland Wright was apparently never intended to be the permanant artist on the strip, and he bowed out not long after the debut. A new artist was found, an art student at North Texas State University named Casey Shaw, and he was groomed to take over the art. He began drawing the strip on November 2 1981. Wright continued to oversee and sign the art until December 19. Thereafter the strip was unsigned for the rest of its year-and-a-half run.

At the end of the first year of the strip's life, New York Times Special Features called it quits from the comic strip business. Despite a tiny client list that could not have made the balance sheet look too attractive, Benji found a new home at Field Enterprises. At this time Dustin and Clawd were banished from the strip, Benji began walking on all fours, and real life trainer Frank Inn was introduced as Benji's main foil. The changes were all positive, but it was a case of closing the barn door after the horse has bolted. Field offered the strip for just about seven months, until May 28 1983. Here are some samples from year two, courtesy of Casey Shaw:

I was able to track down Casey Shaw, second and basically main artist on the strip, and he offered me a lot of the information for this essay. I asked Shaw how he felt about not getting to sign his work on Benji, and he had this to say:

That's a tricky one. I was a college kid just happy to be working on a syndicated comic strip and Benji was such a creation of Joe Camp that I was kind of surprised that Harland ever got to sign it. I equated it to working on a strip for Disney, which the artists never seemed to sign. If they had offered, I'm sure I would have accepted just for the opportunity to have my name become more a part of the comics community, but I never pushed or lobbied for it.

One of my most treasured possessions is a letter from Berke Breathed excoriating me for not signing the Benji work. This was during the time period after Breathed had graduated from the Univ. of Texas, but right before the launch of Bloom County. Breathed had been drawing Academia Waltz at UT while I was a high school student in San Antonio and the paperback collections of his college work had inspired me to start a daily strip at North Texas State when I went there (which is what eventually led to the Benji gig). I had sent Breathed some samples of my college work and corresponded a couple of times and then sent him a few of the Benji clips. His response to my working part-time illustrating someone else's strip with no credit was written in that exquisite exuberant exasperated style that we all came to know from Breathed.


Noting the varied and wonderful art on his website, I asked for an update on his career:

After Benji ended, I went on to full-time graphic design and computer graphics work, but I always continued to also spend at least part of my time doing cartooning work. While in Dallas, I freelanced humorous illustration for numerous companies and contributed regularly to the Dallas Observer alternative weekly newspaper.


I later moved on to USA Today and became Creative Director for their USA Weekend Magazine Sunday newspaper supplement. During that time, I was also the magazine's cartoon and puzzle editor and I drew weekly gag cartoons for the magazine's Wit & Wisdom column.


These days, I'm doing less cartooning and more gallery fine art work, though I also still work full-time as a designer for the local newspaper, which is owned by Berkshire-Hathaway Media Group, and one of my jobs is building the newspaper's comics pages.


When I was a kid, the thing I dreamed of most was becoming a syndicated newspaper comic strip cartoonist ... and now I fear, with the direction newspapers are taking, that it may actually be possible that a generation from now, kids will have no idea what newspaper comic strips were! My dad instilled a real love of the art form in me and I used to spend hours in the library pouring through old newspaper archives and micro-fiche in amazement at the work created in the early 20th century.


Thanks very much to Casey Shaw for his invaluable help with this mini-history of the Benji strip.

Comments:
There it is! Casey Shaw's name seemed familiar, and then the mention of USA Weekend brought it back. His cartoons appeared there regularly for at least the last ten years of the insert's existence. "Casey's Cartoon Corner" had a very short run, but I remember enjoying Casey's cartoons every weekend for quite awhile.