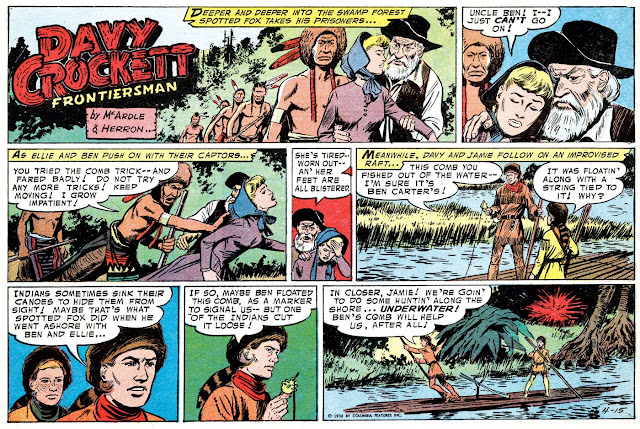 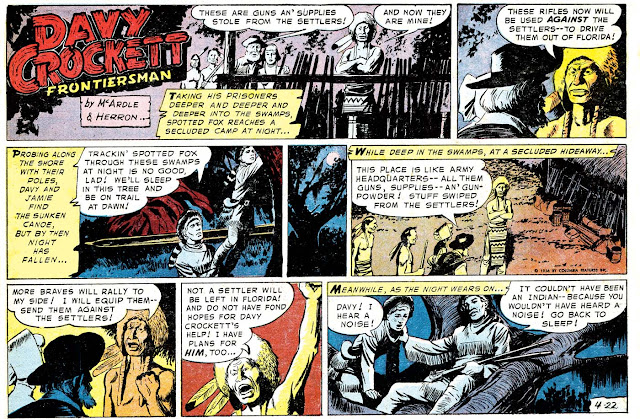 When Walt Disney decided to tag along with the boom in TV westerns with a mini-series about Davy Crockett for his Disneyland show in 1954, he unleashed an unexpected mania among the pre-teen boy set. Coonskin caps, fringed jackets and leather moccasins became a full-fledged marketing bonanza, and the theme song of the program became a #1 hit.

Columbia Features recognized a golden opportunity. Disney had made the mistake of making a pop culture phenomenon out of an historical figure. You can't copyright and trademark a real person, so Columbia was within its rights to offer a comic strip about Crockett, piggy-backing on the craze.

The Columbia Features strip, titled Davy Crockett, Frontiersman, debuted as a daily on June 20 1955* to a lukewarm reception from newspaper editors, a victim of the fact that there were already so many western strips already on the market. Editors were doubtlessly saying that sure, Crockett is a hot property, but am I supposed to turn over the whole blamed comics page to cowboys and their ilk? There was also the factor that papers running Disney's Treasury of Classic Tales series (and there were a lot of them) had been put on notice that they were going to do the 'real' Disney version of Davy Crockett in a six month Sunday strip series starting in July.

Columbia's new strip was created by Jim McArdle, a journeyman artist who spent nearly the whole decade of the 1940s drawing the adventures of Dr. Bobbs (an obscurity that we'll discuss here one of these days). McArdle's art was nothing to write home about, but it got the job done. Never known as a writer, McArdle was soon joined on the strip by Ed Herron, who took over scripting duties on July 18 1955**.

Despite the appearance of the Disney version in Sunday papers, Columbia decided to go head to head with their own color version, which debuted on October 16 1955***. Although it never appeared in many papers, the Sunday got a few plum sign-ups, from the Chicago Tribune and New York Daily News, which alone can keep a strip afloat.

The Columbia strip told the sort of non-historical but semi-plausible baloney that you would expect, expanding even more on Disney's truth-in-advertising Legend of Davy Crockett -- accent on the Legend part.

What could have been just another ho-hum 'me-too' strip becomes a minor celebrity and cause celebre for comics fans when Jim McArdle was in the process of bowing out from the art duties. In late 1956 the Sundays start to look like the product of various hands, although generally not in a positive manner. Then in December someone fabulous shows up. Here is the December 30 1956 Sunday, sporting some superb art that I cannot identify (though Al Williamson sorta comes to mind): 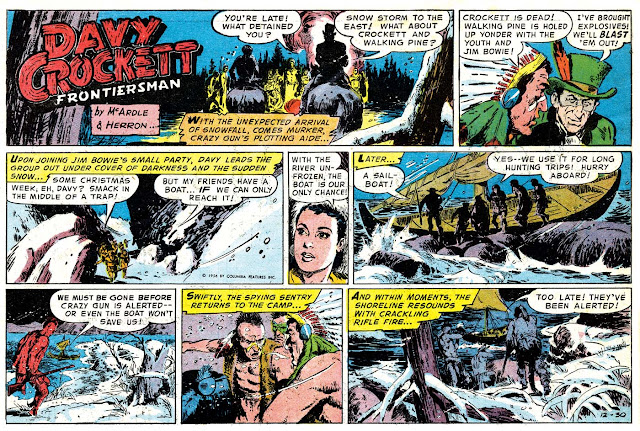 Then in January the King weighs in. And by the King, of course I mean Jack Kirby. Working under McArdle's signature, Kirby drew the dailies for January 14 to February 2****, and the Sundays of February 24 and March 3, before giving way to the new regular artist, Jim Christiansen. If you'd like to see the Kirby Sundays, you'll find them here on Michael Vassallo's blog. 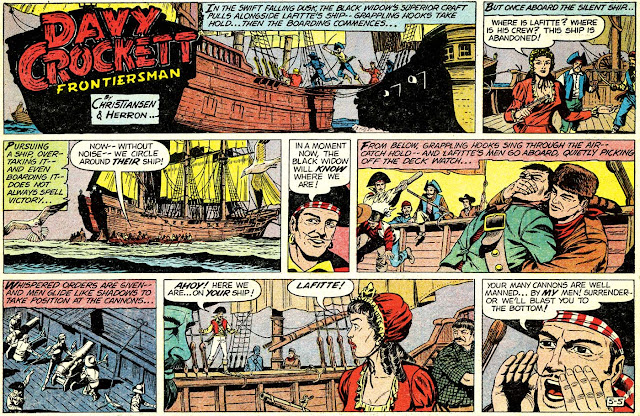 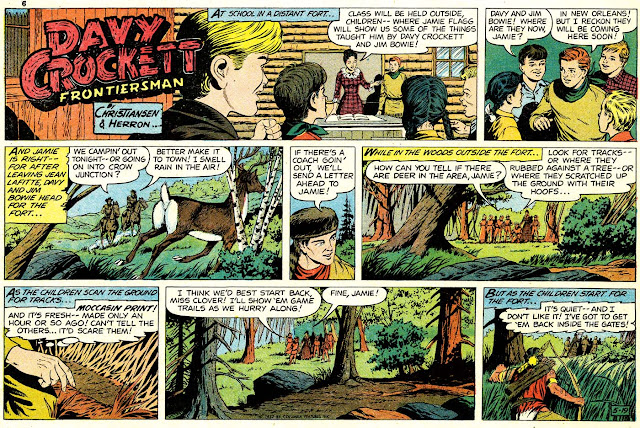 I think Christiansen's art is a real breath of fresh air, but it was too little too late for the strip. As far as I know by the time he came on board there might well have been only a single client left -- the New York Daily News. And when they told the syndicate that they were dropping the strip in favor of The Heart of Juliet Jones, Columbia knew they were sunk. The final Sunday appeared on August 25 1957, followed by a week of dailies to finish off the last story, ending on the 31st****.

Columbia continued advertising all of their strips for many years in Editor & Publisher, but there was no new material created, nor were there any takers that I know of for reprinting the existing material.