Obscurity of the Day: Deb Days 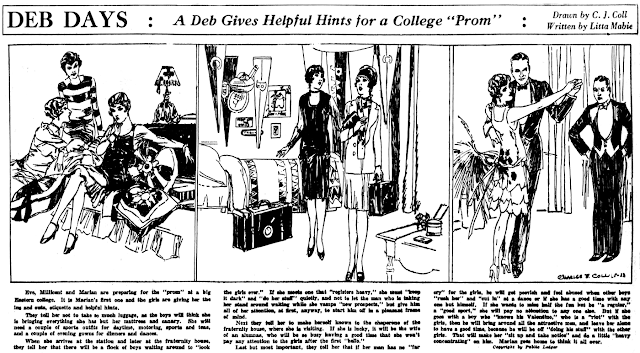 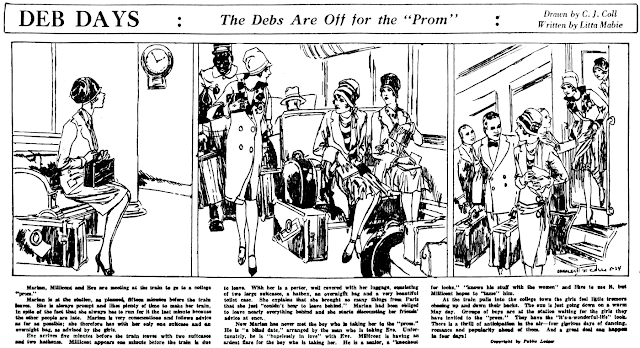 As it is with many actual debs, Deb Days is lovely to look at, but that's where the attraction ends. The more time you spend, the more vapid the subject seems.

Deb Days debuted from Philadelphia's Public Ledger Syndicate on April 18 1927*, a product of writer Litta Mabie and cartoonist/illustrator Charles J. Coll. Coll's art on the strip is superb (see top two samples), but Mabie's writing spoils the fun. It becomes apparent very quickly that Mabie feels nothing but disdain for debutantes, which is fine unless you have contracted to write a freaking daily comic strip about them. She writes only about their faults and foibles, taking great joy out of unmasking their every inadequacy. What's more, Mabie's writing itself is grating. She feels the need to put "hashmarks" around every "dratted" "term" that she "fancies" could be considered "slang". It "drives one bonkers", "I guarantee".

After a few months Coll had evidently had enough of the torture of reading her scripts and begged off the assignment. Replacing him on June 20 1927 was Earle K. Bergey. Bergey was fresh out of art school, and this was his most high profile assignment to date. He would go on to become a highly respected and prolific painter of pulp and paperback covers in the 1930s and 40s.

The young Bergey's art was quite good, but he hadn't learned how to draw women with the sex appeal that he would display later in his career. Mabie's scripts kept up the same boring anti-deb drumbeat, but thankfully some editor was now somewhat curtailing her annoying use of double quotes. The series was cancelled with the release of November 19 1927, probably mourned by no one including the creators.

Ink-slinger profiles for all three creators are to follow this week, so stay tuned.

Comments:
Allan, what a pleasure to find your research bearing on the overlap of artists, C.J. Coll and Earle K. Bergey. Deb Days presents an interesting moment in the earlier years of Earle K. Bergey's career, though I'd suggest it is a bit more interesting in content than you concede, having reviewed all of the panels beyond what you reproduce here. The language is certainly dated, as is the humor, but there's a clear attempt at modernity to the women protagonists and situations of this strip—smart, savvy women who determine their own paths with a sense of freedom that is in keeping with the times of the early to mid 1920s. No great ground is broken, but Mabie was being politely subversive in an enjoyable way that recalls an early Anita Loos. However, the main reason I am writing is to straighten the narrative regarding this period of Earle K. Bergey's career. Young indeed, Bergey was already quite accomplished by this time in terms of his published art, including but not limited to his confident depictions of women that anticipate his work to come through the early 1950s. Your readers would benefit to see the paintings he was producing at the Academy in the early 1920s, his many newspaper illustrations and naughty interiors of magazines like Laughter if we're talking "sex appeal." An entire year before this strip even hit the presses, Bergey was producing cover paintings for the influential pin-up title, Paris Nights, where he overlapped with Enoch Bolles and Charles Hargens. This strip is a happy aberration in the course of Earle K. Bergey's career, but rather like a swansong to his work in newspapers than some "high profile" project, especially in the artist's own assessment of his trajectory. It doesn't make sense to judge his depictions of women, what he may or may not have learned, or the vitality of his greater career at this time period, in the mid to late 1920s, by several dozen wonderfully accomplished panels of a pen and ink strip that serves a specific audience (and author) with paid-for illustrations of society people dressed in tuxes and gowns. Sex appeal wasn't the point. Again it's exciting to see these rare images coming to light again; so thank you for giving Bergey attention!