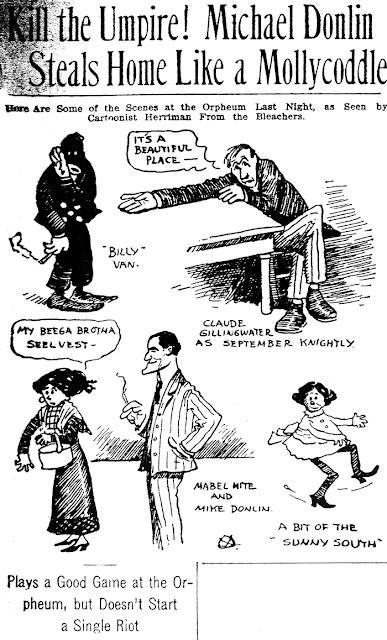 June 29 1909 -- Herriman supplies both a cartoon and the accompanying article about the latest offering at the Orpheum. I take it that it is a vaudeville revue of some sort, but you'd never figure much out from George's wacky article. Unfortunately I did not get the complete text in my copy, but this'll give you the gist:

"Artichokes," said Joe Beamish, the well-known cultivator of that unctious fruit, "are the most oncertain luxury. Here I comes in town with perhaps the first of that variety of the season, expecting to have Joe Reichl meet me at the station and offer me at least eight dollars apiece for them, but, as he tells me, there ain't a single Kansas millionaire on the register and Izzy Klingenstein is most impartial to artichokes, so the best he could do for me was two-bits for the pair,"

With that weight of gloom on the chest of a man of my finicky temperament, the Orpheum is the only place it can comfortably evaporate, so, as Billy Van says, getting confidential, "Lemme tell you," the Vindabonas, all the way from Europe -- and I've got Hambletonian Klein's word for it -- whether there's a heavy duty on a name like that or not, they sure slipped by Ellis Island with a brand of Harmony that would make the tariff on nutmegs look like a debate between a Petaluma cheese and a Yacqui sandwich.

...idea that gravitation is all the bunk, the way they handle bikes and wheels.

Pete Donald, the brawny Scot, and Miss Neta Carson do a Highland terpsichorean stunt that has the flavor of the heather and blue bell.

Closing, we get a taste of the Sunny South.

Now, on the low-down, between ourselves, I'd sell out the artichoke farm in a minute if I knew I could see Mike out in the field talking earnestly and eloquently now and then putting his index finger in Hank O'Day's eye -- and I guess there's lots in the Bronx as would, too. 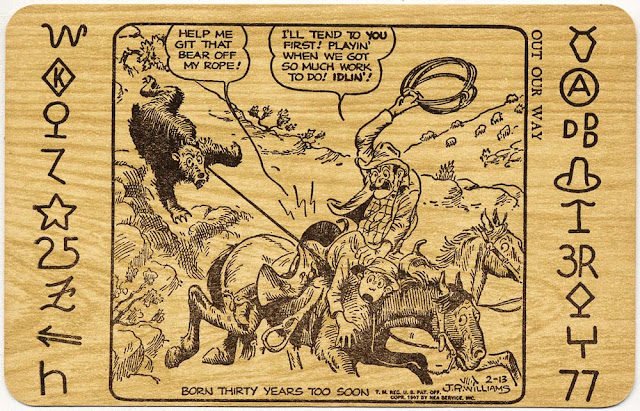 Here's another J.R. Williams Out Our Way postcard issued in the 1950s by the Standley-May Company of Albuquerque. On this one they didn't even bother to remove the original NEA copyright and date. You'd think it would be worth their time to rout that stuff out so as to make it look like Williams produced this panel especially for the postcard.

Obscurity of the Day: The Treasure of San Mateo 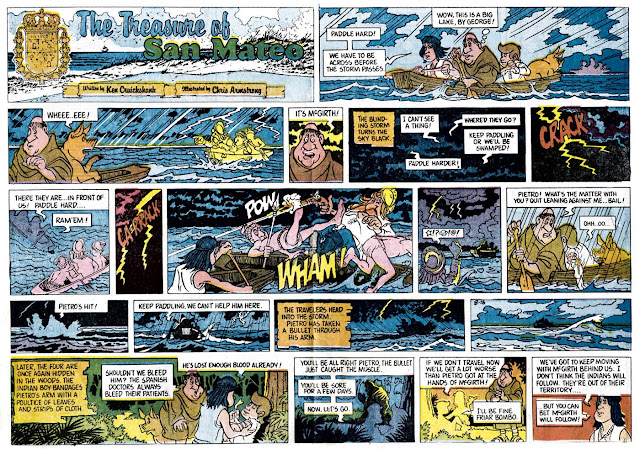 Based on only two examples in my collection, and one more I found online as original art, The Treasure of San Mateo shows a lot of promise as an historical adventure set in the early days of Spanish rule in Florida. My tearsheets are just clippings and therefore anonymous as regards the source newspaper, but the credits to writer Ken Cruickshank and artist Chris Armstrong are enough to pretty well guarantee that this strip ran in the Jacksonville-based Florida Times-Union. Both fellows were employed there in 1981, the year in which these strips saw print in their Sunday comics sections.

I have no idea how long this strip ran in the Times-Union or whether it was syndicated to other papers. Unfortunately artist Chris Armstrong, who later made a prominent name for himself as a fishing magazine illustrator, has since passed away, and I have been unable to determine the present whereabouts of Ken Cruickshank. Any information you strippers can share about The Treasure of San Mateo would be gratefully appreciated.

I found an end date for Tom Forman and Ben Templeton's "Elwood" in the September 29, 1990 edition of the Colorado Springs Gazette-Telegraph (between "Frank & Ernest" and "Funky Winkerbean")

Thanks Ben, I'll update the Elwood post. From that last strip you found, it looks like Elwood may have become a little more 'soapy', a la Funky Winkerbean, in its last years. I'd like to see more.

Hello, greetings from Brazil. What an amazing blog!

Reading your discoveries of obscurities, it reminded me of a comic strip released here in 1976, translated as "Don Piloto". The strip appears to be from the US and it was distributed by the United Feature Syndicate. There is no author and its origin remains a mystery to this day.

Here are some pictures of the comics:

Hi Badin --
\Those images are from the US comic strip Don Patrol by Gary Patterson. It ran here 1975-76.

Hi Allan, thank you very much!

Following your clues, I found out that Eli Bauer also worked on it.

From the Sub-Basement of the Archives: The Yellow Kid in The Monthly World 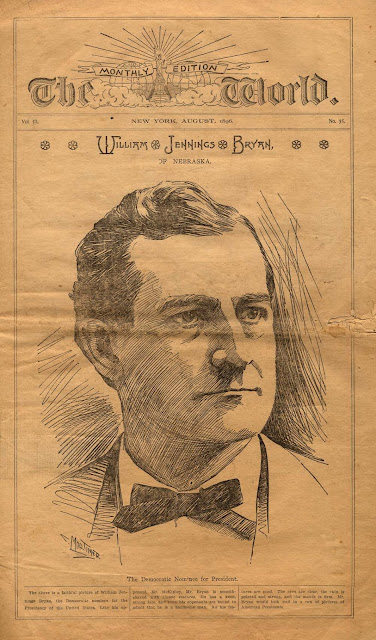 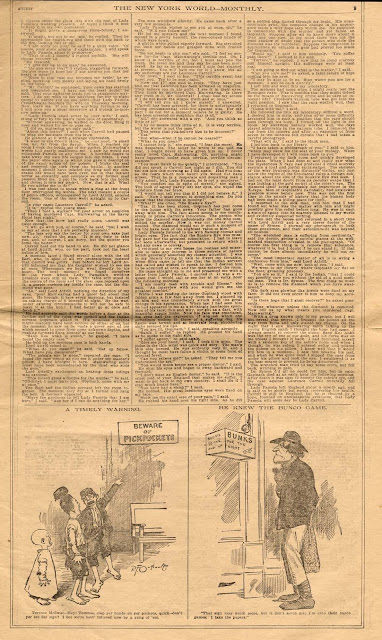 The Monthly Edition of the New York World seems to have been pretty well lost to history. From the few examples I have and the few tidbits of information I find online, I gather it was sold nationally by subscription in the 1880s and 90s. The tabloid issues contains newsy material plus a mix of history, fiction and general articles of the sort you'd find  in the likes of Harper's Monthly. I gather that the main incentive to subscribe was that each January issue was a monstrous thick World Almanac and Encyclopaedia, often weighing in at more than 500 pages of material ... though a healthy percentage of that was advertisements.

I only have two issues, and the first is from March 1896. There are a few cartoons in it, all reprinted from Punch, with credit. However, in the August issue, as seen above, Pulitzer offered their own homegrown cartoons, including one by Outcault that has the Yellow Kid in a supporting role. I was quite thrilled to discover that, but then found that the cartoon is not original to this publication  -- Bill Blackbeard's book The Yellow Kid reproduces the cartoon and credits it to the July 5 1896 edition of the regular New York World. Oh well, it was pretty exciting to think I'd found an unknown Kid cartoon for awhile ...

Comments:
There used to be variant versions of big city papers, apparently for distant mail subscribers. They weren't really full of news, as they would be quite stale by the time they arrived, so they were mostly full of feature stuff or the scandal and horror material that the Sunday editions were famous for. (A tradition far longer in evidence in Britain, where the term "Sunday Papers" is used to describe precisely this type of journalism.)
I used to have some other editions of the monthly World from the 1890s, one I recall had for its main story a ghastly tale of a medieval central European queen who ritually would bathe in the blood of her teenaged virgins, prompting her terrible overthrow. I'm sure it wasn't real. Another had a story about an African tribe of men living in trees that had tails.
There was a monthly version of the Chicago Inter-Ocean and for years, right into the WWI era, the "Atlanta Tri-Weekly Constitution".


Beaumont M. Fairbank was born on December 30, 1876, in Brooklyn, New York, according to his Social Security application which had his middle name as Moulinear then Moulineror. Fairbank’s middle name was Molinar on his World War I draft card. Fairbank’s parents were Beaumont H. Fairbank and Emma Meeks who married in 1872 in Manhattan, New York City.

In the 1880 U.S. Federal Census, Fairbank, his parents and older brother were Brooklyn residents at 146 Lawrence Street. Brooklyn directories dated 1888 to 1890 listed the Fairbank family at 594 Halsey Street.

According to the 1892 New York state census, Fairbank’s maternal grandfather was part of the household at 584 Halsey Street.

Information about Fairbank’s art training has not been found.


Fairbank was an artist in the 1900 census. He would make a career of illustrating trains. Fairbank resided with his parents and brother, a journalist, in Brooklyn at 823 Quincy Street.

The 1905 New York state census said Fairbank and his parents were in Brooklyn at 1969 East 14 Street.

The Fairbanks’ address was unchanged in the 1910 census. Newspaper illustrator Fairbank and his wife had a newborn son Loren. They were part of Fairbank’s father’s household. 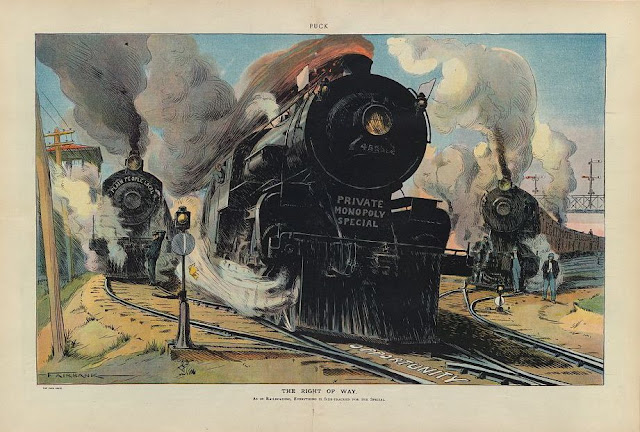 In the 1915 New York state census, Fairbank was the head of the household which included his parents. Their Brooklyn address was 1542 East 14 Street.

Fairbank signed his World War draft card on September 12, 1918. He was a newspaper artist employed by the Brooklyn Daily Eagle. His home was in Brooklyn at 1428 East 14 Street. Fairbank’s description was slender build, medium height with black hair and brown eyes.

The 1920 census recorded Fairbank in his father-in-law’s household; Charles Miller was a real estate agent. Fairbank was a self-employed illustrator. They lived in Rockville Centre, New York at 21 Irving Place.

The 1925 New York state census said Fairbank continued to be in his father-in-law’s household in Rockville Centre but at a different address, 110 North Lee Avenue.

In the 1930 census, Fairbank was head of the household which included his father-in-law and two brother-in-laws. Fairbank was a newspaper artist and his son a photographer. 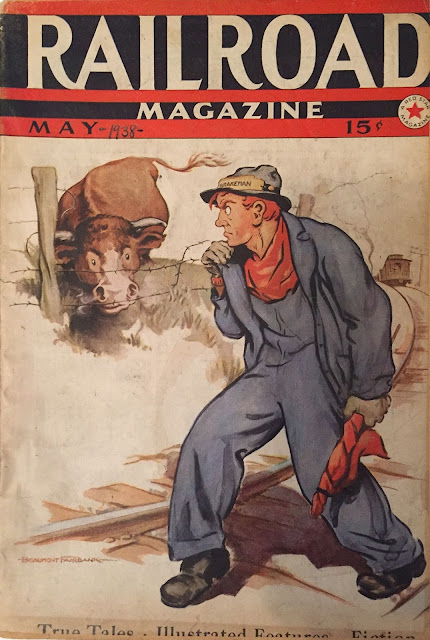 Fairbank has not yet been found in the 1940 census. He was in the 1942 Rockville Centre city directory at 110 North Lee Avenue.

American Newspaper Comics (2012) said Fairbank created Railroad Red which ran from February 24, 1941 to December 21, 1941. It was distributed by the Bell Syndicate. A 1941 summer issue of Railroad Magazine noted the new strip, “Beaumont Fairbank, artist, 110 N. Lee Ave., Rockland [sic] Center, who contributed a front cover and several cartoons to Railroad Magazine a few years ago, is now doing a clever rail comic, “Rockland [sic] Red,” which Bell Syndicate is handling for various newspapers. Rail comic strips are rare; hence the interest attached to this one.”

The Leader (Freeport, New York), November 4, 1948, reported that a painting by Fairbank won the Memorial Library poll: “‘Mail Train in Snow Drift,’ an oil painting by Beaumont Fairbanks [sic], of Rockville Centre, was adjudged the favorite in the poll of exhibits by patrons of the Freeport Memorial Library. This was announced at the reception given by the Freeport Artist Guild in the library on Monday night.”

The March-April exhibition of paintings was opened Saturday at the Freeport Memorial Library. Most of the exhibitors are members of the Freeport Artists Guild.

The north wall features works of Beaumont Fairbank of Rockville Centre, an Artists Guild member who died recently. Mr. Fairbank won top honors in the popular vote award in November with his painting “Mail Train in Snowdrift.” A resident of Rockville Centre for thirty years he was born in Brooklyn seventy years ago. He lived in Brooklyn for thirty years, and was known for his work in the Brooklyn Eagle. He did many comic strips, one entitled “Railroad Red.” He also did many magazine covers. His colored reproduction of the January 27, 1923 Literary Digest cover is exhibited in the Library. There is also a pastel of a train, entitled “Express” and a black and white drawing.