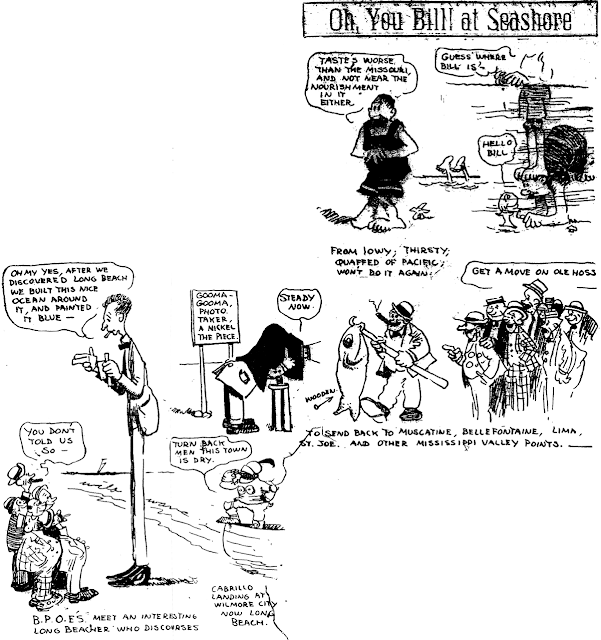 July 15 1909 -- Another Herriman cartoon about the Elks convention, happening in and around L.A. The microfilm was pretty messed up on this page, and given that the cartoon is of minimal interest 119 years later, I elected not to take a few hours of my life to try to clean it up beyond the basics.

Wish You Were Here, from a William F. Marriner Wannabe 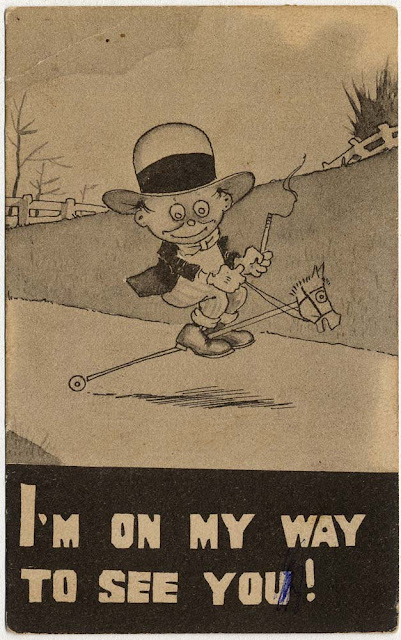 Here's another card from that Marriner copycat we saw back in March. Just like the other one, there is no publisher credited, and the postmark (once again really faint) seems to be 1910.

Obscurity of the Day: Mr. Boss 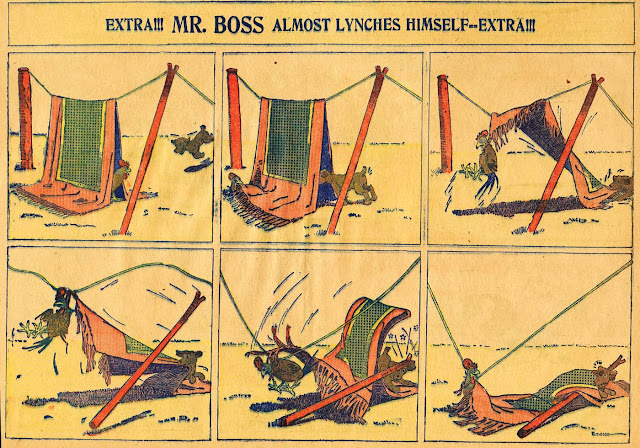 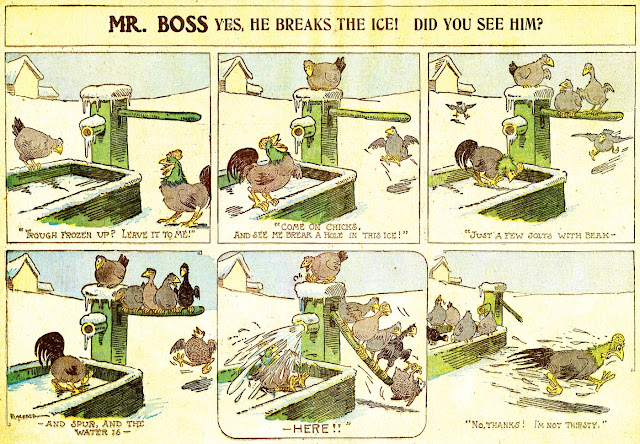 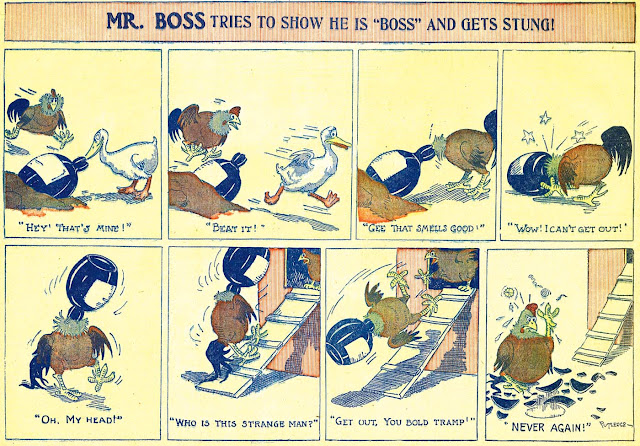 When World Color Printing began sharing many of  the Philadelphia Press Sunday comics (Hairbreadth Harry, Mrs. Timekiller, Clumsy Claude, etc.) in 1911, they were able to produce a complete four page Sunday section with very little additional content. Along with their flagship feature, Slim Jim, the only other comic strip they kept producing was Mr. Boss by an excellent cartoonist who signed himself 'Rutledge'.

Thanks to Alex Jay, we've already identified the mysterious Rutledge -- he is Frank Rutledge Leet, one of the mainstays in the NEA cartooning bullpen at this time, and obviously moonlighting at WCP for a few extra bucks.

Mr. Boss was a pretty good strip, with highly animated barnyard animals the characters, and a typically egotistical rooster getting star billing. Lots of raucous physical humor with a minimum of gabbing makes this one a winner.

Mr. Boss began in the WCP section on November 14 1909, and survived the great content purge of 1911. The strip kept running until May 18 1913, when Leet decided to try something different. His new strip was called Duke -- a real stinker of a strip about a pony.

In my book you'll see this strip listed as Mr. Boss and Mr. Reynard, and a note there says that the Mr. Reynard character began to get co-billing in late 1911 or early 1912. Okay, so I don't know what sort of wacky weed I was smoking that day, but I can no longer find any evidence that a Mr. Reynard was a character in the strip except once on February 19 1911. So it's time to get the ol' Marks-a-Lot out, and do some surgery on that listing. Everything else is okay, but drop Mr. Reynard from the title and black out my completely errant comment. 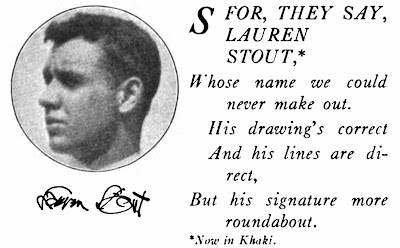 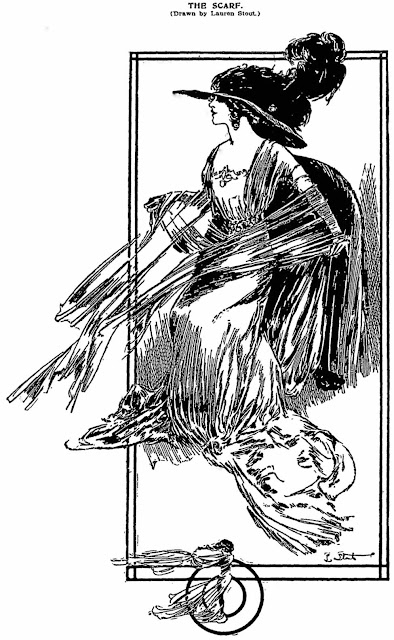 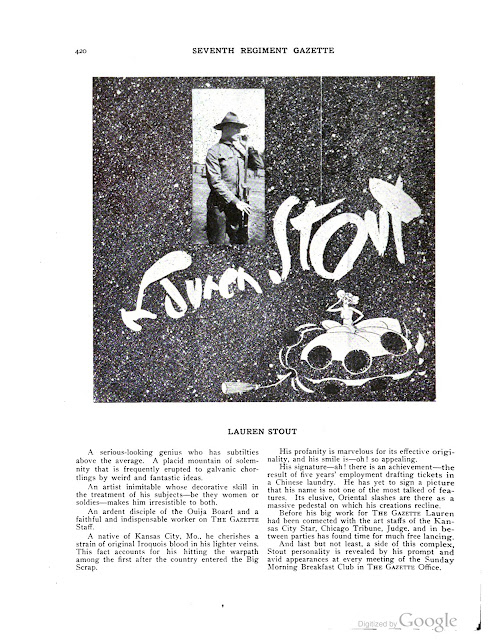 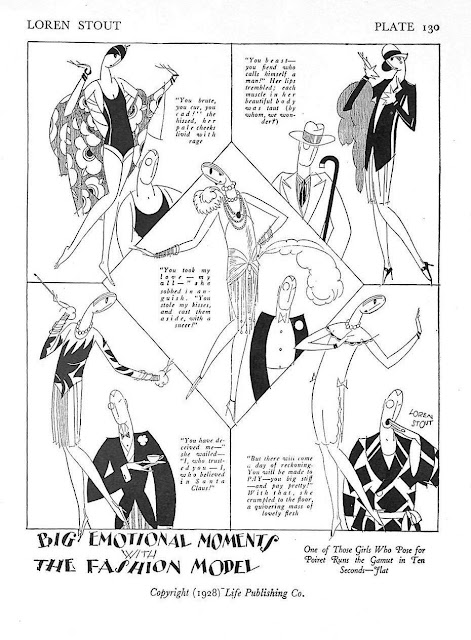 Movies have advertised themselves by way of comic strips practically since the two mediums were initially popularized. In the early 1920s and before, the tendency was to advertise the characters rather than the movie plot per se, and Dulcy the Beautiful Dumb-Bell follows in that direction.

The 1923 silent film Dulcy starred Constance Talmadge as a scatterbrained young beauty who tries to help her husband get ahead in business through a wacky scheme. This scenario is about as tired a plot device as you can imagine, but in the hands of George S. Kaufman, who co-wrote the original play, and Anita Loos, co-screenwriter, I imagine it was a fun film. Sadly, the film is now considered lost.

The advertising comic strip, which seems to have run for 24 installments, or four weeks of dailies, advertises the character of Dulcy by trotting our some of the most basic jokebook 'dumb blonde' jokes and managing to execute them badly. The joke writer, whoever it was, plays a mean trick by assigning writing credit to movie star Talmadge, who should have sued for defamation. Luckily, the strip looks fabulous. Lauren Stout has never been on my radar before, but the lively and highly stylized art  on these strips makes certain I won't soon forget his name.

Although these ad strips were handed out to newspapers for free, I have yet to find a paper that could stomach running all 24 episodes. The earliest appearance I have found is in the Harrisburg Evening News, and based on that appearance I assign 'official' running dates of July 31 to August 27 1923, though don't hold your breath looking for such an actual appearance.

Comments:
I’m not sure I’ve ever seen a group flop-take before!

That's what caught my eye, too. These are some spectacular back flips!

(I'd love to see a long post or two on early flip takes!)

Althrough the 1923 version is lost, it's reamde in 1940 by MGM with Ann Sothern in the title role, It's played often on TCM, so you ought to checked it out!!!

Magazine Cover Comics: The Countess and the Cowboy 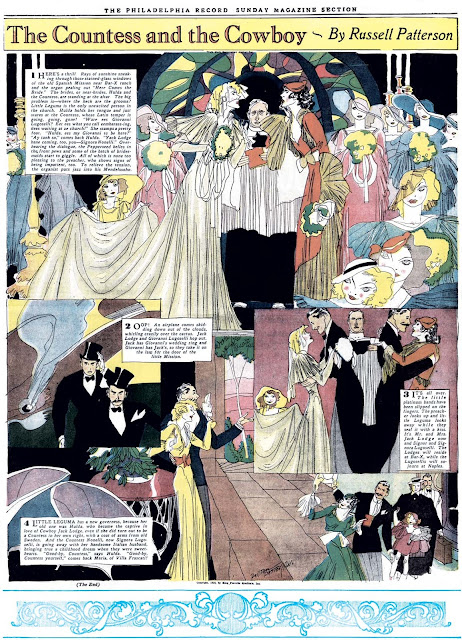 Russell Patterson was still in the phase where his women look like extras in a zombie film when he did The Countess and the Cowboy for King Features from August 14 to October 16 1932. Therefore, with just a little imagination, you can add a whole additional layer of very creepy subtext to this otherwise bland tale of romance.

The above sample is the final page in the series, so SPOILER WARNING -- the guys get the gals and they live happily ever after. Who woulda guessed?