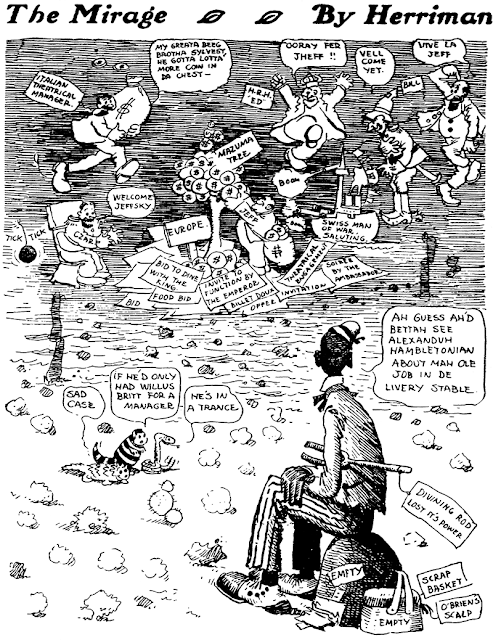 August 10, 1909 -- Prioir to their championship fight, Jim Jeffries has sailed for Europe where he is being feted by the glitterati, while Jack Johnson feels left out. Herriman could do a better job of focusing on the racism at the core of this imbalance, but shirks that to concentrate on the financial aspect.

Wish You Were Here, from R. Edward Shellcope 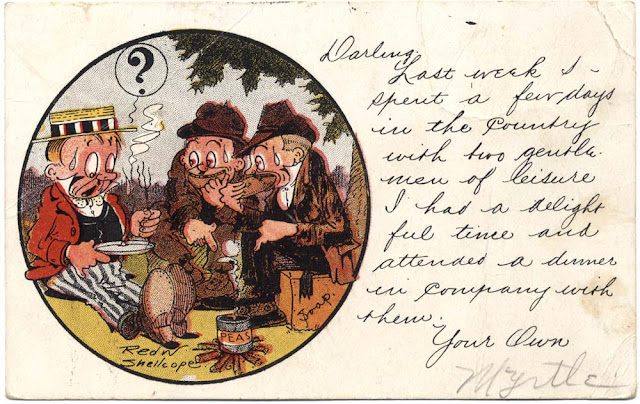 R. Edward Shellcope is remembered among know-it-all newspaper strip fans for his work at the Philadelphia Inquirer in the 1900s. He had a style that owed a lot to William F. Marriner. This is the only postcard work of his that I've encountered; the company that published this series of cards neglected to take credit on them, but they did remember to say that it was a Post Card in no less than eighteen different languages. Since the card was postally used (in 1909) in Philadelphia, Shellcope's home digs, I'm guessing that it may never have gotten distribution much further than that. Makes the eighteen languages seem like a bit of overkill.

This card is a divided back, postally used in 1909.

Comments:
In those days one of the standard layouts for a Post Card backing was to say it in all the languages of the Universal Postal Union. Perhaps this was to assure other countries it may be sent to that the card was acceptible for delivery there, as I've seen cards from Europe that will sometimes do this also. Not always, though, so it obviously wasn't an actual law.

Obscurity of the Day: The Mannikins

John Booth must have had a rock solid ego to stick with his given name in spite of inevitable comparison to President Lincoln's assassin. Assuming our fellow was in his 20s when he worked at the New York World in the 1890s, his parents stuck him with that name not all that long after the dastardly deed, too. Poor guy! It would be like being born in the 1950s and having your parents christen you Adolf. Good luck with that, kid. 'Sue' would be a cakewalk by comparison.

Anyhow, I know nothing about this Mr. Booth except that he penned two short series for the New York World. The Mannikins was the second of those and ran for just two installments on March 6 and 13th, 1898*. These busy panoramas were given short shrift in the Sunday comics section by running quite small -- small enough that to actually decode all the frenetic action was tough on the old peepers. Booth may have meant for them to be run that small though, since the classical definition of "mannikin" (or "manikin") is "little person", not the clothing display figures we associate with than word today.

Thanks to Cole Johnson for the scans (the whole series!).

Comments:
They seem like all head and no body- Is it possible "Mannikin" might have been a term used to describe masks as well?

Some of these early comic strips are almost nightmarish! Creepy....

Obscurity of the Day: Mrs. Brass 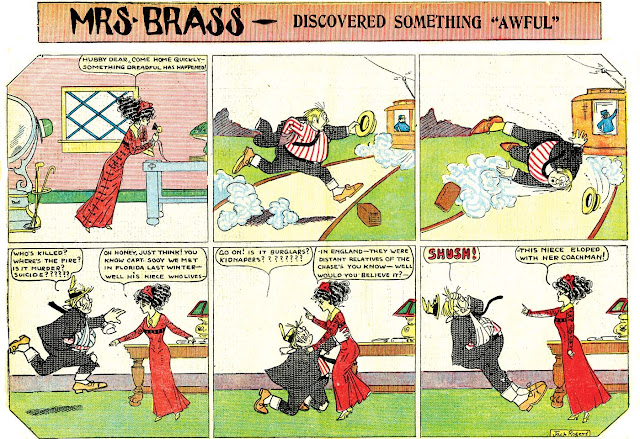 I know nothing about cartoonist Jack Rogers except that he worked for the World Color Printing shop from at least 1906 to 1909, and then as far as I can tell, fell off the face of the Earth. Barring a miracle, I'm guessing Alex Jay will have little luck tracking down a fellow who has such a common name.

Mr. Rogers was no great shakes as a cartoonist. As the sample above shows, his cartooning was rather wooden and his gags, at least for the Mrs. Brass series, weren't exactly going to keep Mark Twain up at night worrying about his place at the top of the humorist pantheon. Mrs. Brass was one of only two series which Rogers created himself; the other two he worked on were inherited from other cartoonists.

The one-note Mrs. Brass, who puts her doting hubby through the wringer with her unreasonable demands, ran in the WCP section from July 25 to October 17 1909*. It was Rogers' last new series, and apparently closed out his cartooning career.

Obscurity of the Day: TV Tee-Hees 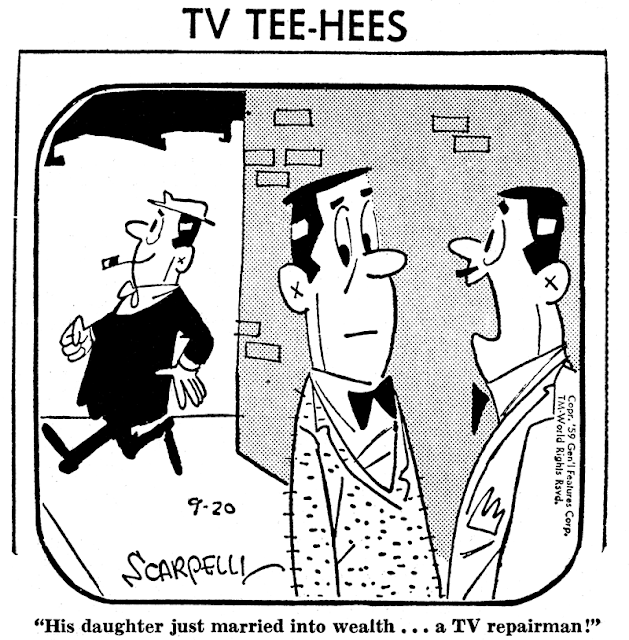 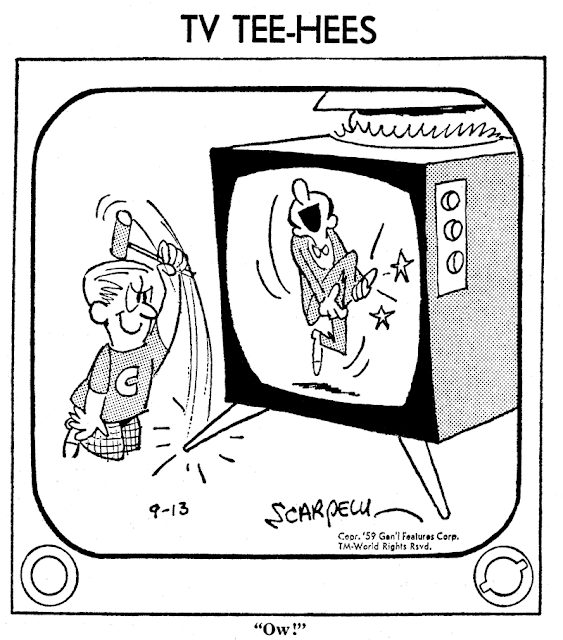 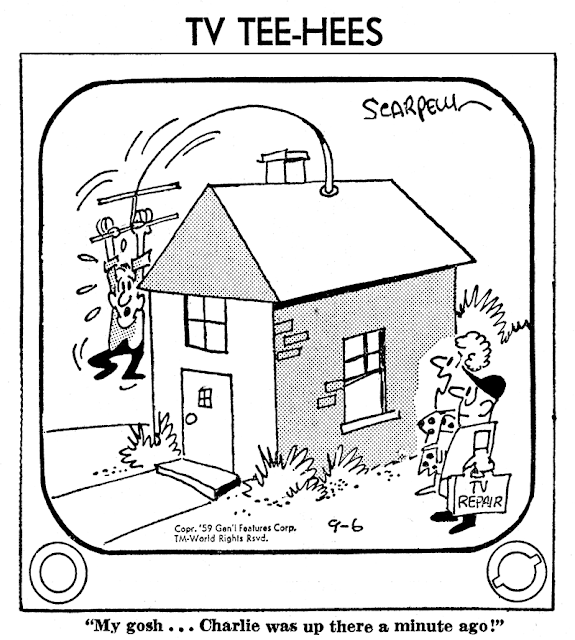 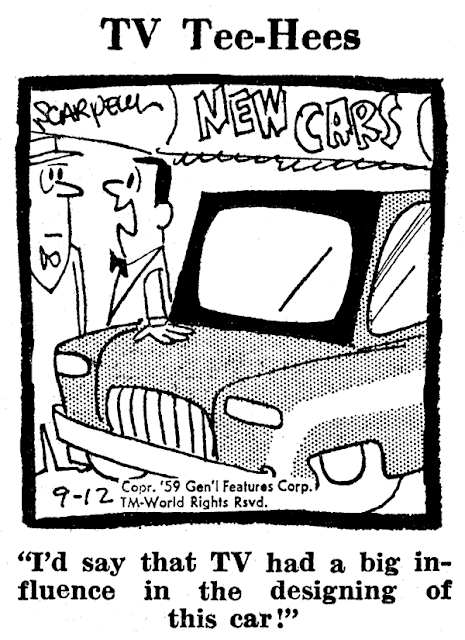 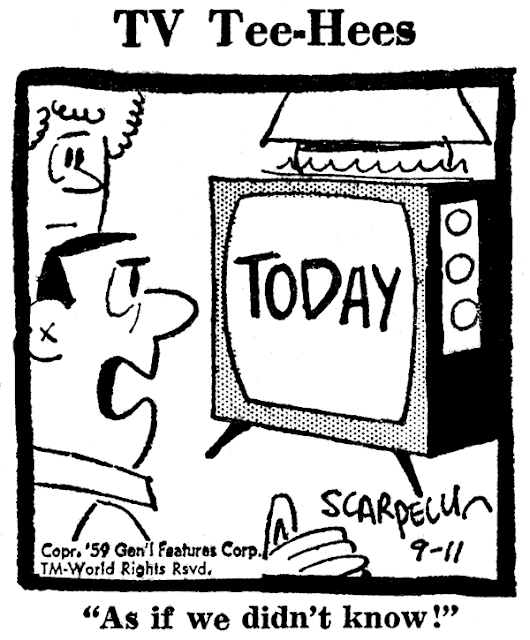 Henry Scarpelli is best known for his work on the Archie line of comic books and the newspaper comic strip, but his work in comics started long before that in the 1940s. His first brush with newspaper work came when he signed on as assistant to John Henry Rouson, working on the Sunday of his strip Little Sport. That would have been in the early to mid-1950s.

Little Sport was syndicated by General Features, and Scarpelli must have made a favorable impression with the syndicate, because they awarded him his own bylined feature, TV Tee-Hees. Newspapers were deathly afraid that TV was going to kill their market, but tried to embrace it to stay relevant. In the mid-1950s it became common for papers to issue daily or weekly television program listings, giving TV junkies a reason to buy the paper even if they didn't read it otherwise. As always, the syndicates latched onto the new feature by offering a cartoon or comic strip specifically designed to accompany the listings.

The most popular of these features was Bil Keane's Channel Chuckles, but it was hardly alone in the genre. Henry Scarpelli's TV Tee-Hees covered the same ground, starting as a weekly panel in August 1956*. The weekly panel, which ran 2-columns wide, usually came in the actual shape of a TV set complete with dials, though some papers cut off some or all of that (see top three samples). Newspapers used the panel in their weekly TV listing sections, generally included with the Sunday paper.

General Features must have been pleased with the reception, because they asked Scarpelli to begin producing a daily 1-column version of the panel, which could run in papers that printed daily TV listings. This version began in July 1957** and met with enough newspaper buyers to keep it afloat.

Although the panel never rivalled Channel Chuckles in popularity, at a small syndicate like General Features it was counted as a success. There was even a book version offered by Fleet Publishing in 1963.

The panel even outlasted General Features itself. The syndicate was bought out by the LA Times in the late 1960s, and the imprint was dropped in December 1974, along with many of its features, but TV Tee-Hees was retained. A bigger syndicate meant higher expectations, though, and apparently TV Tee-Hees didn't quite make the top of the ratings there. The panel went off the air in 1978 (lasting until at least July of that year***).