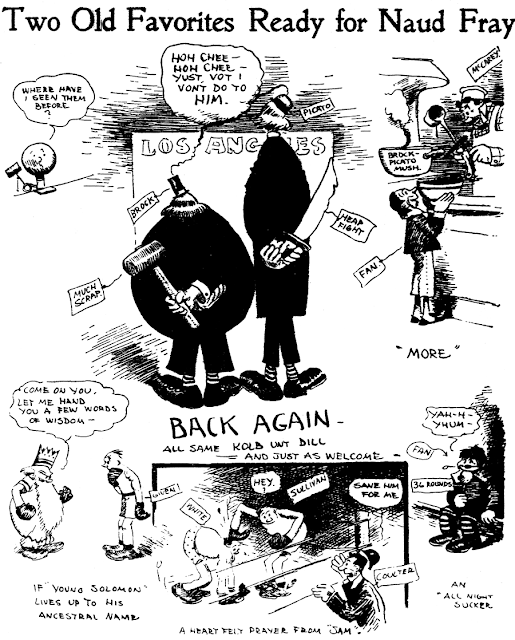 September 7 1909 -- A packed fight card at Naud Junction tonight, with some up-and-comers and local favorites. According to Boxrec, the marquee fight between Frank Picato and Phil Brock was won by Picato, and Young Solomon lost his bout.

Apparently Herriman went on vacation for a few weeks after this, as his next large cartoon won't appear until the 23rd. 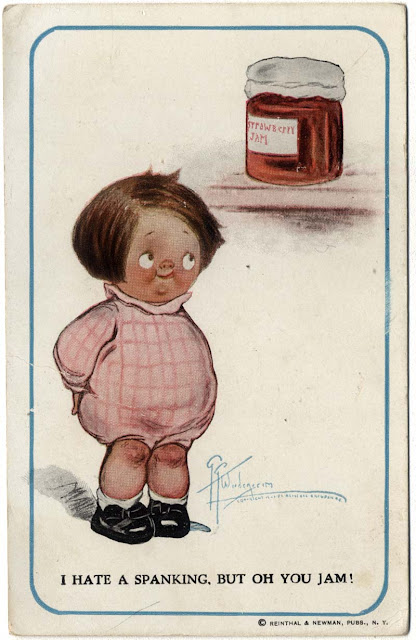 Here's a Grace Drayton (signing Weiderseim at this time) card from Reinthal & Newman, this one marked #120 on the reverse. The maker hasn't dated it, but Grace hand-lettered a copyright notice under her name, and dated it 1909.

This one is a play on the then-current fad saying, "I love my wife, but oh you kid.", immortalized in many postcards by Albert Carmichael. 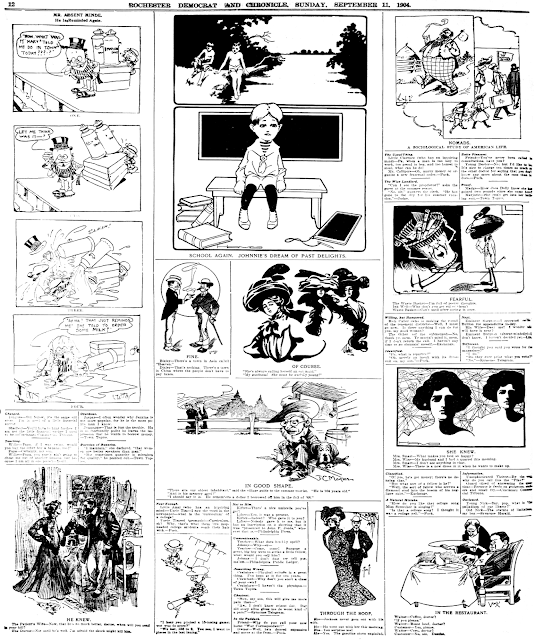 Mr. Absent Minde (or Mr. Absen T. Minde) by William F. Marriner is one of those many strips about an absent-minded man. These things sprouted like weeds in a garden back in the day. It ran from September 4 to October 9 1904*.

In the upper lefthand corner of the sample above you'll see one of the earliest contributions of Ryan Walker to the International Syndicate page. 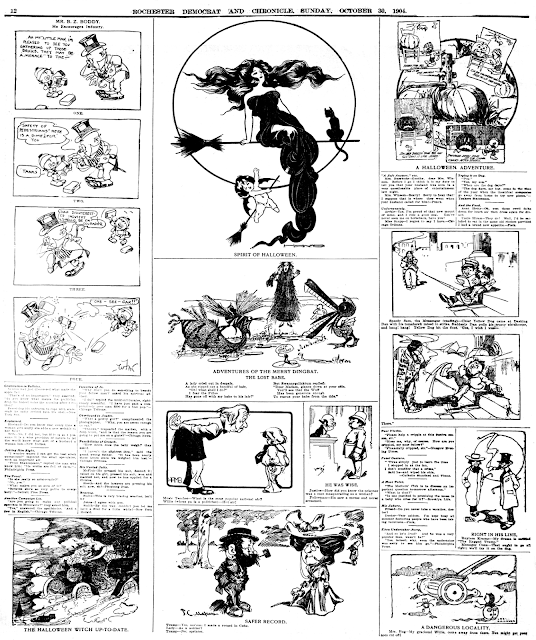 On the page above we have samples of two series. Mr. B.Z. Boddy by William F. Marriner appeared only twice, on October 30 and November 20 1904*. The interesting thing about this series is that Marriner had already done a short-lived series of this title for the New York Evening Journal in 1902. Not having access to those strips outside a microfilm room, I can't say if Marriner was reselling the same strips to International, or if he came up with new installments of the same series.

Also on this page is a series by a mystery cartoonist. Adventures of the Merry Dingbat, a panel and rhyme series featuring fanciful animals, 'officially' ran from October 30 to December 12 1904*, but the same creators contributed panels about bizarre animals on many additional pages. This is some really weird and wacky stuff, both art and poetry, and its a shame that the creators saw fit only to sign themselves as H & L,when they bothered to sign at all. 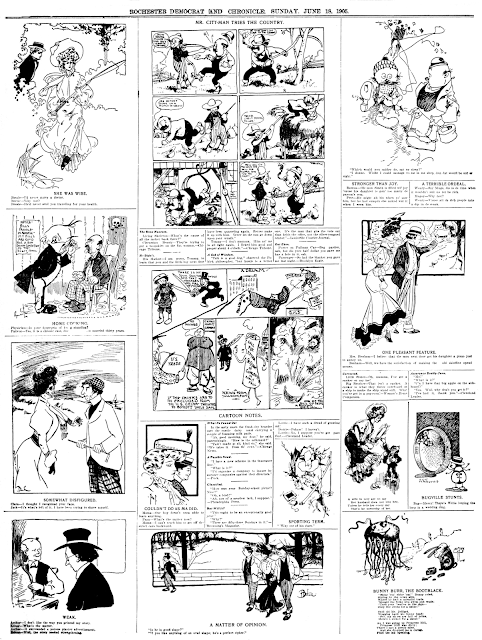 Here we come to the latest of the series that I found in the International Syndicate page. For some reason (change of editor?), series material pretty much stopped dead in 1905. I tracked the page through most of 1906 and never saw another series.

This last series, Mr. City Man Tries the Country, is appropriately half-hearted, running a grand total of two times, on June 11 and 18 1905*. Mark Fenderson was the cartoonist.

Next week we'll continue this series on the International Syndicate, now working backward from where I started my search in early 1903.

Comments:
Any idea who "Midget" on one of these pages is? Like their style.

The Early Comics Series of the International Syndicate Part III: 1904 Series by Fenderson, Marriner and Hambleton 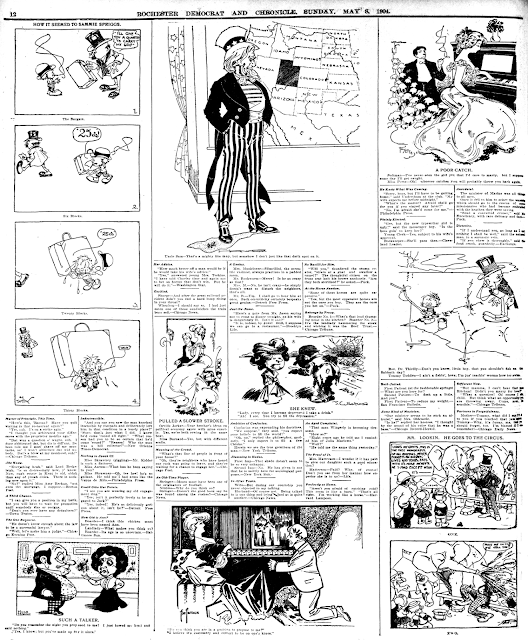 Mr. Lookin was by Mark Fenderson, who started contributing to the page with this series. This strip about a fellow who dives into situations without thinking, ran from April 24 to June 12 1904*. It was always a two-panel strip -- set-up and denouement with no extra frills. 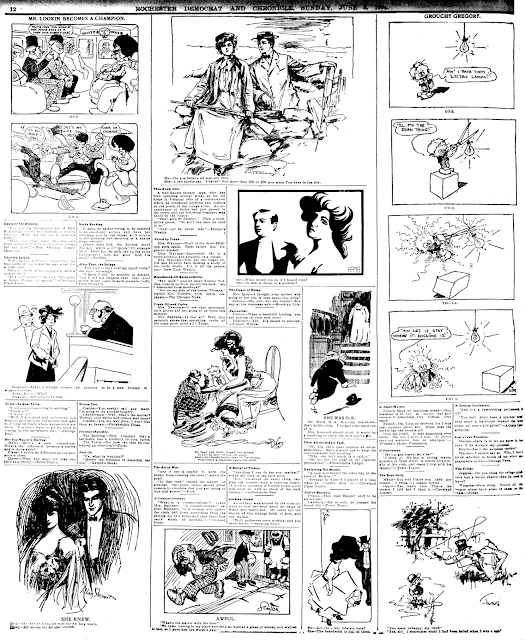 Grouchy Gregory, a strip about a kid with anger issues, was contributed by William F. Marriner. It ran from June 5 to July 31 1904*. Also noteworthy on this page is the top central cartoon, by Florence Pearl England Nosworthy. She made a name for herself in magazine cover and children's book illustration.

Unfortunately there are many contributors to these pages whose signatures I cannot decipher. Anyone who can ID these folks is very much welcome to chime in. Even some whose signature is plain elude me -- who was Fayette, or the colorfully named Foe Feroux? 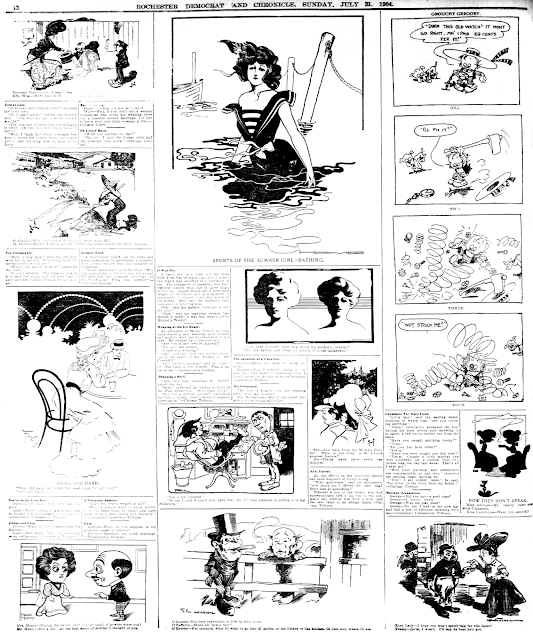 Oddly enough, this is the only International series by A.Y. Hambleton, who was a major and constant contributor to the page for a long while. Sports of the Summer Girl, a pretty girl panel series, ran from July 24 to September 4 1904*. Hambleton is a real bright spot on these pages whose bold line really makes an impression.

Note in the bottom right is a panel by Carl Anderson, who was an infrequent contributor to the page.

Comments:
Hi! This might seem as an odd question, but I am writing my Master's thesis on feminism in American comic strips in the 1960s. I would like to use examples of strips from a fairly controversial cartoonist(s), dealing with the subject of women and/or abortion, contraceptive pill, etc. Any suggestions? I really like your blog. 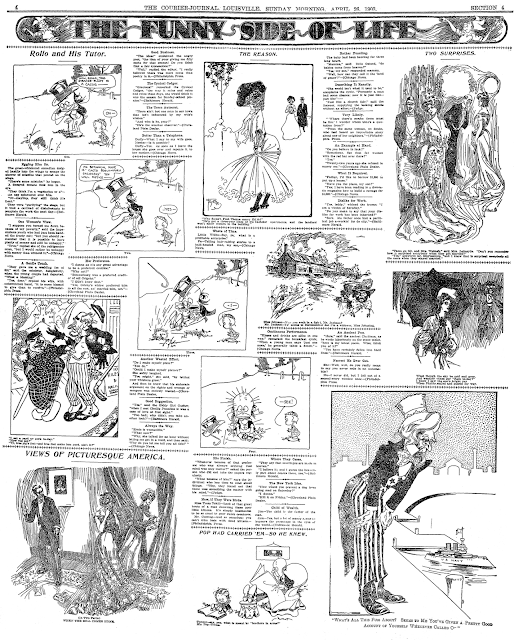 First up,  Rollo and his Tutor (above), which ran each week from April 19 to June 28 1903*. This one offers a daffy teacher who gets his facts mixed up. 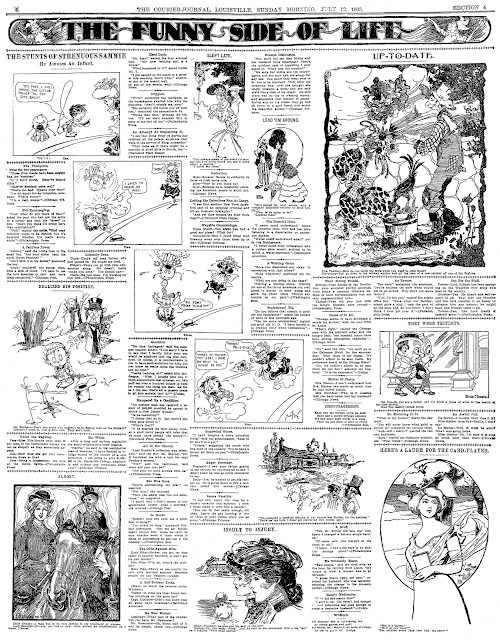 Above we have Stunts of Strenuous Sammie, a satire based on President Theodore Roosevelt's flamboyant calls for men and women to engage in physically strenuous outdoor pursuits. Most kids were crazy for Teddy and many took his example and philosophy to heart. This series ran from July 12* to September 27** 1903.

Note on the page above that Dwig is now contributing to the page (upper right), and a fellow named Hugh Morris is doing a passable imitation of F.M. Howarth. I'm told that this is one of the many  pseudonyms of C.E. Toles,  but he was dead by this time. Were these 'Hugh Morris' cartoons material from the slush pile, previously printed, or is Mr. Morris actually a living breathing person? 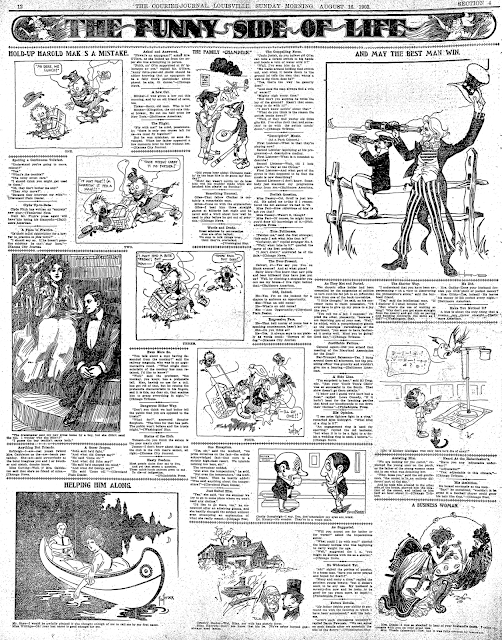 Above is the first installment of Holdup Harold, about a light-fingered hobo. This series changed titles to Holdup Herbert with the second episode through November 8, then returned on December 27 with the fellow's name changed back to Harold. The series then ran through April 17 1904*. In 1905 he popped up again for two episodes, on February 26 and March 5***.

The Early Comics Series of the International Syndicate Part 1: The Hunt Begins, with Tweedledum, Tweedledee and the Other Triplet

Baltimore's International Syndicate was one of the earliest distributors of newspaper cartoon content, starting in 1899*. Unfortunately their output is hard to track because the syndicate very rarely displayed a copyright on their material. The earliest features I was able to include in my book were Zimmie (a weather cartoon) and the long-running Scoop the Cub Reporter, both of which debuted in 1912 (Zimmie had been distributed earlier but not by International).

That leaves at least a decade of the International Syndicate unaccounted for before the advent of their first known series. That was in no way alarming to me, because it was my belief that the syndicate specialized in non-series gag panels.

International Syndicate did in fact specialize  in gag panels and text jokes. In that I still seem to be correct. However, what I didn't know until very recently is that they offered this material not only as a collection of bits and pieces for newspapers to use willy-nilly, dropping in a panel here, typesetting a joke there, but also as a cohesive page. This page went under the consistent title The Funny Side of Life for many years. 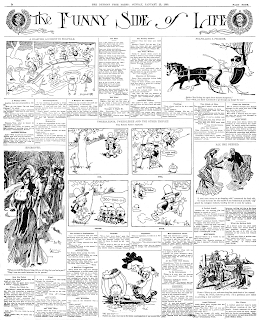 The above page is among a small selection I purchased recently. All from the Detroit Free Press of early 1903, the pages have a recurring series by William F. Marriner on many, plus a selection of gag cartoons and text jokes. The text jokes are all credited as originally appearing in various publications.

A question you may be asking is why I believe that these pages came from International Syndicate. After all, there are no copyright stamps on them. The thought came to me based on this page and several others having cartoons by 'Hamb' -- that's A.Y. Hambleton, a Baltimore cartoonist.

That wasn't nearly enough to pin the blame for those pages on International, but it piqued my curiosity enough that I selected some nice clear text from one of the cartoons and started searching online. To my surprise, I found a few newspapers that ran the complete page on a regular weekly basis, some for long periods. Many others cut the material apart, but these papers offered the material as I imagine it was supplied by the syndicate, masthead and all.

I began tracing the page backward and forward in time, and I had to get back all the way to 1901 for the real "ah-ha" moment. In that year The Funny Side of Life was replete with cartoons by the fabulous C.E. Toles, who we know from John Adcock was the editor of the International Syndicate. As far as I'm concerned, that sewed up the case.

The fun part was that although the vast majority of the cartoons on these pages are one-shot gags, the syndicate did actually offer some half-hearted series. In the coming days I'm going to feature these series on the blog. All of our samples from here on will come from digital microfilm, so bask in the quality of today's sample, which comes from real live pulp paper. Today we'll start with the first series I found ...

Tweedledum, Tweedledee and the Other Triplet

This series by William F. Marriner has been featured on the blog before, way back in 2006. That previous appearance, unfortunately, turns out to have offered only misinformation. At the time I believed that this series originated with the Chicago Chronicle. The Chronicle called their 1903 comic section a production "by Chicagoans for Chicagoans", so you can see where I could have been misled.

Tweedledum, Tweedledee and the Other Triplet offered the typical Marriner big-headed urchins. In this case it's a trio of little terrors who send their victims into a neurotic fit thinking that they've been drinking too much and are seeing triple. This series first appears in the January 3 1903 page, and is last seen on April 5 of that year**.


* This date and lots of other info provided in John Adcock's biography of C.E. Toles. My spidey sense says that the real start of the syndicate is 1892, though, when it was known as the Comic Sketch Club of Baltimore.  Adcock doesn't say that the two companies are related, but the similarity of their business models and personnel make the connection seem very likely. I prepare to stand corrected. In my favor, though, I'll let the cat out of the bag now and say that I was able to trace the International page back to 1896, so no matter what company name it went by then, it was active in distributing this page. Jeffrey Lindenblatt has traced it even further, to July 1895 in the Cincinnati Enquirer.