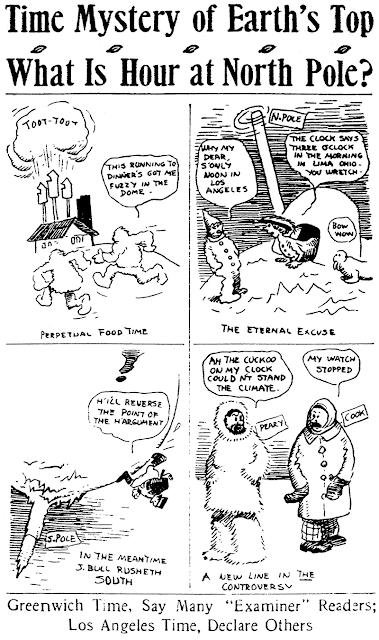 Ocxtober 16 1909 -- Cook and Peary both claimed to have 'discovered' the North Pole this year. The Examiner confronts the conundrum of which time zone applies at that point on the globe. 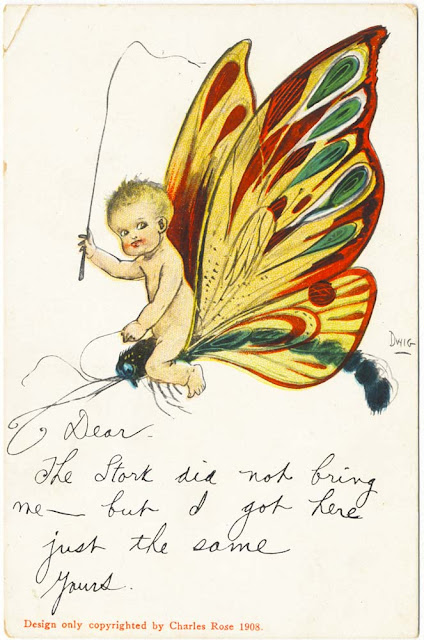 Here's another Dwig card, this one copyrighted by Charles Rose in 1908. On the reverse is the logo with the little Swiss fellow holding the stein and American flag. Rose usually listed a series on his cards, but this one just bears a number on the reverse -- 2151.


George H. Blair was January 1863, in Truro, Nova Scotia, Canada. The birth date is from the 1900 U.S. Federal Census and the birthplace was revealed in the Boston Herald, January 11, 1941, which also said Blair “was a graduate of Dalhousie College, Halifax, Nova Scotia.” The census said Blair emigrated to the U.S. in 1884.

Information regarding Blair’s art training has not been found.

Blair and two other Boston artists were mentioned in Profitable Advertising, August 15, 1894.

Blair and his family were Boston residents at 62 Copeland Street in the 1920 census.

Blair’a address in the 1930 and 1940 censuses was 10 Aspen Street in Boston. He was a newspaper artist. The 1940 census said Blair had three years of college.

Blair passed away January 10, 1941, at his home in Roxbury, Massachusetts, according to the Herald. He was survived by his wife and son.

Obscurity of the Day: Fatty Spilliker 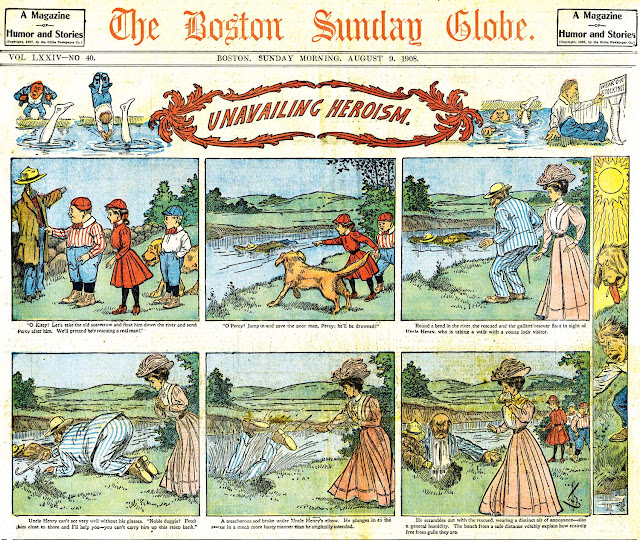 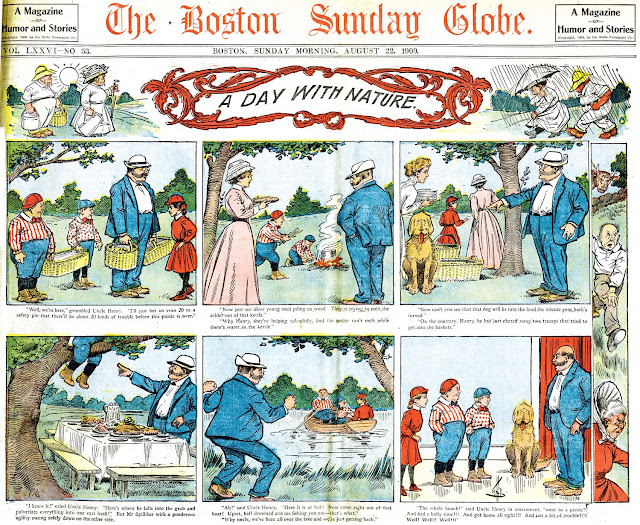 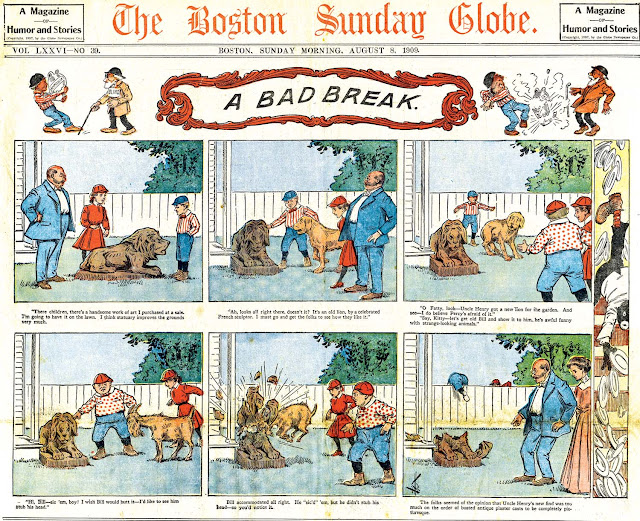 George H. Blair produced a number of comic strips for the Boston Globe, but the one that became his bread and butter, and ran for over a quarter of a century, never had a title. It had a consistent cast and locale, but Blair could not bring himself to put one character, or even the name of the family, up there in the title bar. Instead, as you can see in the samples above, the headline always related to the day's gag and only mentioned character names in passing.

The strip to which I have assigned the name Fatty Spilliker began on November 24 1901, introducing a family that would eventually be known as the Hoobleys, but were then called the Goodwins. The star of these early strips was the trouble-courting pre-teen daughter, Kitty. She was every bit the match for Buster Brown in hellraising. She had a brother, a little younger than she, a well-behaved kid named Danny. That poor kid often suffered along with her, pulled along to trouble in her wake.

The earliest strips called her Kurious Kitty, thus tantalizing future researchers that this would be the name of the strip. But Blair tired of that, and Kitty lost her descriptive title after only a handful of episodes.

Mom, dad and grandma were present in the strip but were rarely named. An older sister was there, too, but she was soon married off, leaving the strip. In 1902 Uncle Henry came on the scene, and he became a sometimes co-star. An officious-looking gent, he was a great foil for Kitty's pranks. He was soon followed by hayseed Uncle Zeke, who owned a farm next door. This character opened the door to gags involving farm animals, always a rich vein for naughty kid pranks.

On March 22 1903, Kitty brought home a stray mutt, who was named Percy two Sundays later. Percy threatened to take over the strip, starring in gag after gag that year. But eventually Percy had to be content to be a member of the troupe, not the star of the show.

Blurring the lines even further, Blair started giving his other running characters cameos in the strip. Mister Dusenberry moved into the neighborhood in 1903, and thereafter his own strip disappeared. Absent-Minded Abner also made occasional appearances, but his own strip kept running for many years, albeit at a much curtailed frequency.

It wasn't until 1904 that Blair finally found himself a character who he'd offer star billing, if not in title at least by frequency of the starring role. Fatty Spilliker showed up out of nowhere on April 17 1904, nonchalantly acting as if he'd been part of the show from the beginning. As far as I can discern there was never an explanation  as to where he came from, where he lived, or if he was somehow related. He was just sort of .. there. He wasn't the stereotypical dim-witted fat kid so often seen in this sort of strip. What defined him, beyond the typical Buster Brown-inspired shenangians, is that he thought he was a lot smarter and worldly-wise than he really was -- not dumb, mind you, but not the mastermind he believed himself to be. Fatty Spilliker concocts lots of ingenious schemes that generally blow up in his face, but sometimes he does get a good one over on Uncle Henry, his most common foil.

All the characters were now finally in place, and the strip basically ran on auto-pilot for the ensuing twenty-four years. What was already a somewhat dated looking strip in the 1900s looked ludicrously antiquated by the 1920s, and the writing was just as creaky twenty years after it debuted. It certainly didn't help that the strip was demoted to a third-page format at the beginning of that decade, and then further miniaturized to a quarter-page format. By October 28 1928, when it breathed its last still untitled gasp, I doubt that it was missed by many Globe readers.

While it is true that Blair never assigned a running title to the strip, that didn't stop some anonymous syndicate from assigning it one when they made an attempt to distribute old episodes of the series in the mid-1920s. They called it Fatty Spilliker's Troubles, a perfectly serviceable choice. Speaking of syndication, by the way, the Globe did attempt to syndicate this strip and Ed Payne's Billy the Boy Artist, but never managed to interest more than a few clients.

PS: In my book I list this feature under the title Percy and the Hoobley Family. Why I chose that title as the primary one I don't know except that Percy the dog does get title billing a lot, despite Fatty Spilliker clearly being the star of the show. The second edition, if and when it comes, will have this strip listed as Fatty Spilliker.

Obscurity of the Day: The Rag Tags and Bob Tail 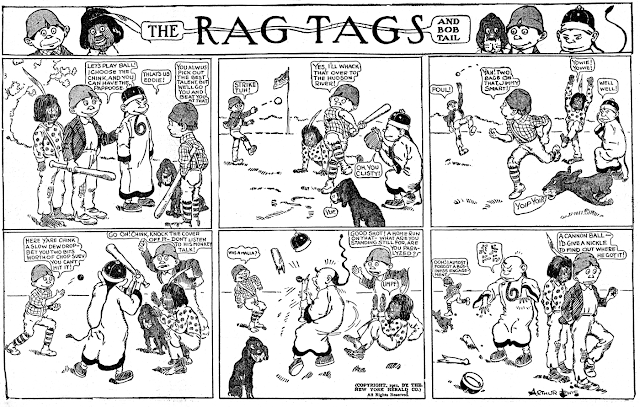 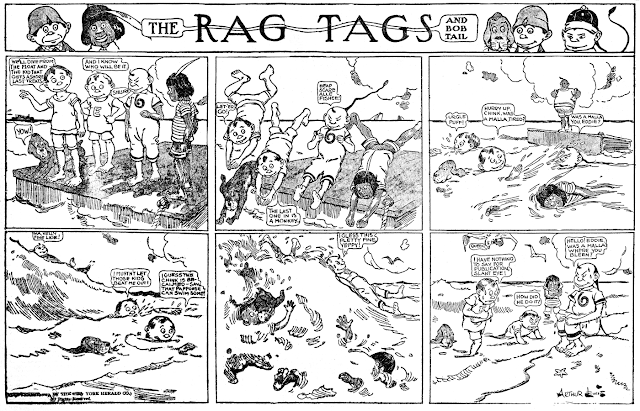 Arthur Lewis, who apparently went by the name Allen Lewis when working on more serious art projects, did just a little newspaper cartooning work. He shared duties on Nervy Nat with James Montgomery Flagg, and produced one comic strip series of his own creation, The Rag Tags and Bob Tail.

The Sunday strip was produced for the New York Herald's comic section from March 12 to July 16 1911*. This kid gang strip was interesting in that half the four-man crew were minorities -- an Asian and a Native American -- and they were not exclusively used as the butt of jokes. Granted, there is some heavy duty stereotyping going on here, but the kids play together and sometimes the Chink and the Papoose (they seem not to have had real names) get the better of the white kids, Jimmy and Eddy. This is a far cry from the typical kid gang strip in which the entire gang is as white as the driven snow, or there is a single minority character who functions only as a club mascot and target of derision. The Rag Tags and Bob Tail is no classic by any means, but did at least offer readers the concept of the races living together in something a little like harmony.

By the way, it took me awhile to suss out that Bob Tail is the dog, so I'm going to save you the trouble in case you're as unobservant as me.

In 1970 Hugh Laidman, an accomplished illustrator and commercial artist, came up with an interesting and original idea for a comic strip. Middle Class Animals offered readers a talking animal comic, but with the twist that the animals are drawn in a straight illustration style. While the description may make it sound kinda meh, in execution I think the idea had a lot of merit. Laidman's strip, which debuted on May 18 1970* via the McNaught Syndicate, really stood out superbly on the comics page. The eccentric combination of word balloons and realistic drawing just seems to catch your eye. You find yourself reading the strip just to find out what the heck is going on there with that odd juxtaposition.

Unfortunately, while readers were drawn to Middle Class Animals, the actual reading tended to leave them a bit underwhelmed. Laidman was a wonderful illustrator, but unfortunately as a gag writer he wasn't so terrific. Way too many of his gags fall flat, leaning heavily on the art to make up for it. It's too bad that McNaught did not exercise a more active editorial hand, because with the assistance of good gag-writers the strip could have, at least in my opinion, turned into a pretty major hit.

McNaught further hobbled the strip by giving it an identity crisis. I quite like the title Middle Class Animals, which is a terrific name for a 1970s strip that offers a lot of hip references. However, they for some bizarre reason had newspapers running it under other titles. I'm aware of one paper that ran it as Us Animals, one that used the title Ani-Malcontents, and as you can see above, one used the title Animal Crackers, which is not only a klunky name but also trademark infringement since Rog Bollen's strip used the same title. How do you create buzz about a strip that runs under any old name some comics editor dreams up?

With too many cards in the deck stacked against it, Middle Class Animals seems to have ended its run after two years, on May 13 1972**.

Comments:
Brilliant strips Allan,thanks for sharing them. They're really obscure but very funny and beautifully drawn!

Many of the originals are soon going up for auction. And it was always Middle Class Animals. All others are bogus rip-offs.
I should know. I'm his daughter.
Cecily Laidman