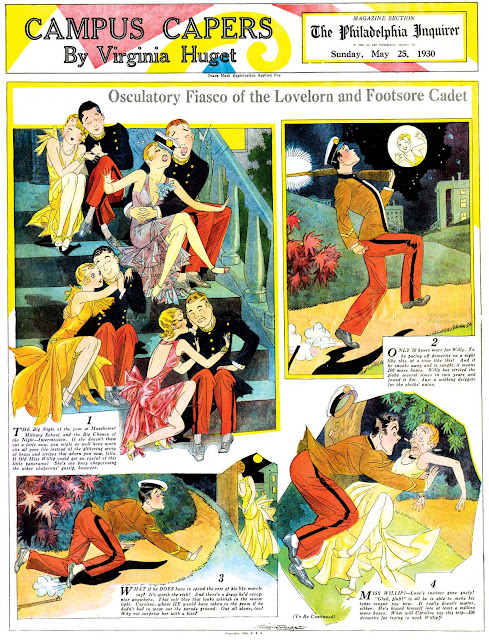 We left off yesterday at the end of 1929, when Dan Smith's long reign on one of the Hearst magazine covers was coming to an end. The thread of this series continues after Smith's departure, now featuring some of my favorite 'comic strip' magazine cover series. Of course, in the magazine cover world, they aren't formatted like strips so much as a series of vignettes, but they tell a story from 'panel' to 'panel', so I say they're strips.

Dan Smith's Pancho Rancho ends on December 15 1929, and I can't figure out from any paper what was supposed to appear on December 22. So our index starts on December 29 1929, and still comes from the Montana Standard. You'll see some familiar titles here, as some have been covered on the Stripper's Guide blog.

We begin with the last four installments of a series titled High-Hat Hattie, which seems to have been stuck into this series from another to fill a hole. We'll cover that series again in its entirety later in another index. This is another good indication that this particular magazine cover series was in a state of flux, if not utter disarray. Was the end of Dan Smith's tenure unexpected, and they were caught scrambling?

At this point the Montana Standard craps out on me. Luckily I find that the Philadelphia Inquirer stuck with this particular magazine series, and ran the series on time, thus keeping my index looking nicely consistent.

The Inquirer, though, displays copyrights not to NFS but to King Features. I compared material from the two papers, and yes, one credited the same covers to King as the other did to NFS! There's proof that the whole "track the cover series by their syndicate stamps" is a rule that will just lead you down the garden path.

Okay, that's enough for one post. We'll pick up here tomorrow with 1935 and on.

Comments:
Something else odd about the Inky- they were bound and determined to erase the copyright lines on their daily strips for many years. I don't know why this was done, other papers did this too, such as the WISCONSIN NEWS, which was from 1921 to 1939 the Milwaukee evening Hearst paper. And 90% of these features were hearst strips. What might be the reason? Sheer asthetics?

I always assumed it was to maintain an illusion that everything in the paper is created right there in the city press office.

Remember the Omaha Bee, and how each of their daily strips back in the teens said "Drawn Especially for the Bee by _____". That still tickles me every single time I see it.