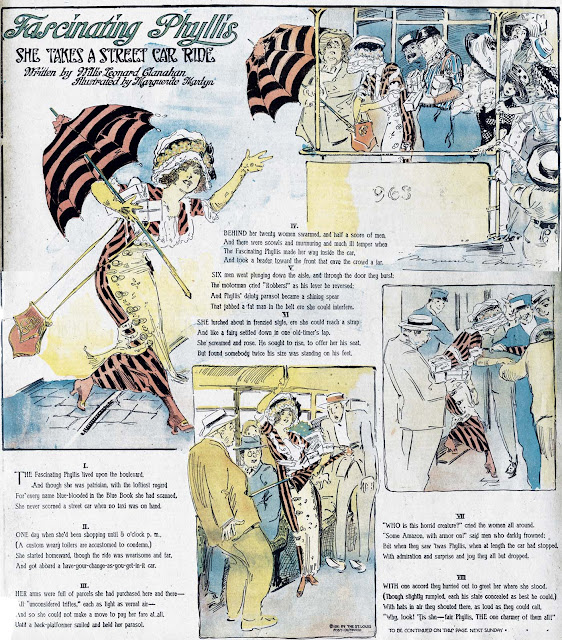 After devoting such a long time to Hearst magazine covers last month, let's cleanse the palate with one from Pulitzer.

Although the St. Louis Post-Dispatch was where Joseph Pulitzer began his newspaper empire, once he had the New York World, the P-D ceased to be the flagship paper in the chain. Most but not quite all comics and features issued forth from the World, but every once in a while the Post-Dispatch threw its weight around, replacing those issued features with local content.

An example of that is Fascinating Phyllis, which was used on the Sunday magazine covers of the Post-Dispatch for awhile instead of the New York material. This pretty girl cover series was first seen on May 14 1911, before the pretty girl magazine cover story strip had even become a standard trope. The pleasant art was by Marguerite Martyn, who was employed for many years at the Post-Dispatch in both an artistic and reportorial capacity.  The verse was supplied by Willis Leonard Clanahan, who shows up on the interwebs for a few published stories and songs.

Fascinating Phyllis ran on the Sunday magazine covers in the P-D through August 27 1911.