Obscurity of the Day: Economical Bertie 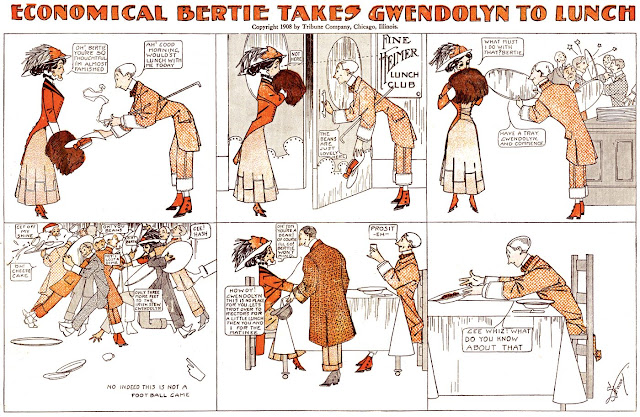 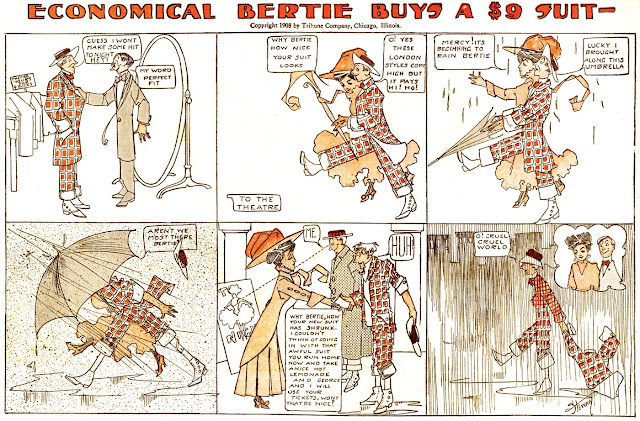 The Hall-Room Boys pretty much cornered the market on the comic strip plot of young men who haven't two nickels to rub together but are trying to break into society and date above their class. However others did try to to horn in on that business.

On November 1 1908 the Chicago Tribune added a feature to their Sunday section titled Economical Bertie, which basically offered readers a singular Hall-Room Boy in the person of  Bertie. Bertie is considerably more naive than the constantly plotting Percy and Ferdie, allowing readers to feel some sympathy for him, something notably missing from those he copied from.

The gags in Economical Bertie are fun and the drawing is absolutely delightful. The only problem here is that Stewart, the signer of the strips, cannot write dialogue or properly arrange it in word balloons to save his soul. How it could be in those days that an editor wouldn't help a cartoonist to fix these basic and simple problems is beyond me.

Economical Bertie ran until April 4 1909, and if you like the samples above then you can read the whole series (in microfilmed b&w) over at Barnacle Press.

A couple postscripts about this strip. First, although they are signed only "Stewart", I feel about 85% confident in saying that the cartoonist is James Stewart, whose only other newspaper strip credit comes a full decade later in the New York Herald with Jimmy Dodge-a-Job. Though Stewart's style had loosened up a bit in the intervening years, I see enough similarities, not to mention very similar signatures, to bet a buck or two on it.

Second, I was intrigued by the top strip in which the gag concerns a "lunch club." I was not familiar with that term, but a Google search turned up the interesting answer. Seems that in the 1900s there was a type of club/restaurant, popularized in Chicago, in which you could buy a monthly membership and enjoy all-you-can-eat lunches every day. These businesses most often catered to working women who liked the idea of a private club in which they could eat lunch in peace, unharassed by men. The idea then expanded and new clubs opened their doors to both sexes. Seems like a great idea, but according to Economical Bertie, the all-you-can-eat aspect made them a bit of a zoo.

Comments:
There were dining establishments intended for feminine clientele known as "Tea Rooms", but it seems to be a bygone business model now.

Buster Keaton makes use of a cheap shrinking suit in the opening scenes of "College". And "The Cameraman" has a bit where Buster and his date catch a ride with Buster's rival. Buster is stuck in the rumble seat during a downpour, and ends up the dripping odd man out like Bertie.

Not that Keaton and his gagmen had seen this specific cartoon, but it's amusing to think that contracting menswear was an ongoing blight to young men's dignity. As for "The Cameraman", Keaton plays Bertie's gag moment for poignance as much as comic embarrassment.