Obscurity of the Day: Pranks with Many Funny Looking Birds 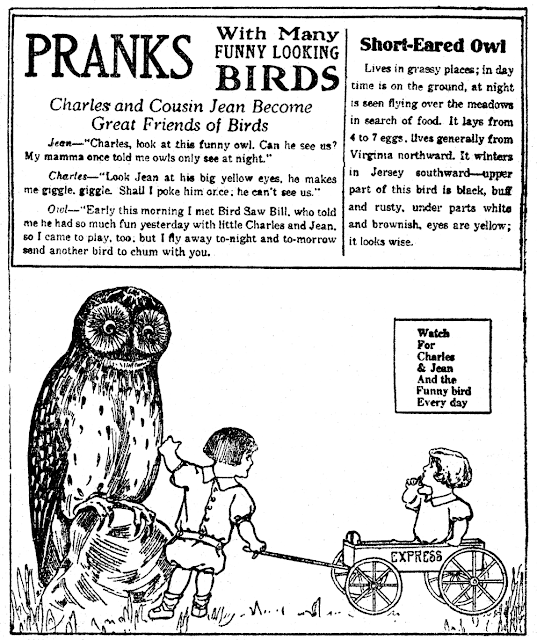 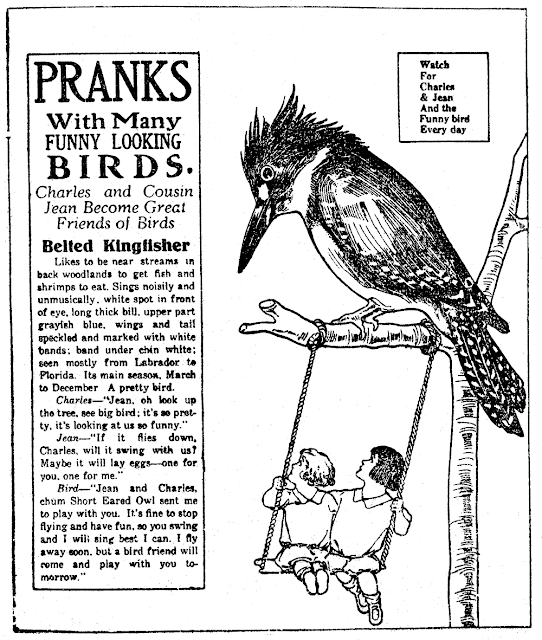 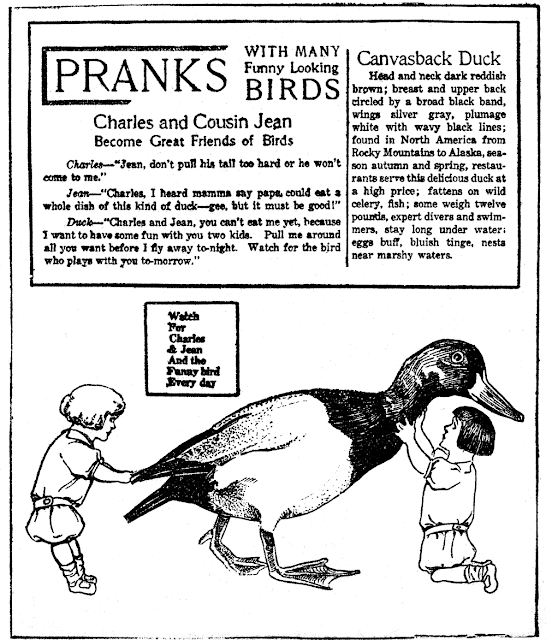 It's debatable whether Pranks with Many Funny Looking Birds is eligible for Stripper's Guide listing, being very text-heavy, but I'm giving it a pass on the grounds that it is of (exceedingly minor) historical importance.

On the other hand, there's no debate necessary that it is a pretty awful feature. The attempts at humor, buried in a sea of type, are so amazingly klunky that readers may have died years later still complaining that they want those precious seconds back. And the constant mynah-like repetition that readers must be sure to come back tomorrow for another time-wasting episode certainly does nothing to endear it.

You have to give the bird characters some points though. In spite of Charles and Jean telling many of them that they, or their unborn children, would make a delicious meal, the birds seem perfectly willing to spend some fun time with the two hungry little carnivores. These birds have truly mastered their Buddhist philosophy.

So what do I find at least trivially historic about it? Well, this feature is from 1913, and it offers an educational component -- that is pretty darn uncommon for the era. It wasn't until the 1920s that the educational strips and panels began to proliferate.

Pranks with Many Funny Looking Birds was offered in syndication by the Philadelphia Evening Bulletin, and the copyright listing tells us that it supposedly debuted in March 1913. However, I just happen to have a few samples of the feature from that paper, and the specific ones cited in the copyright listing did not appear there until May of that year. Therefore, without the luxury of being able to check the Bulletin online, I'm going to guess that its debut in the Washington Star on April 28 is a pretty likely starting point for the series. The latest I can find it running is in the Salt Lake Telegram, which dropped it after June 23.

The panels never included a credit, but the copyright listing cites Walter B. Winstock. A little research shows that Mr. Winstock was employed in the advertising department of the Bulletin, so there's an open question as to whether he actually worked on the panel as artist, writer, or both, or perhaps just had the copyright assigned to him in due to his position.

Comments:
This feature also was in the Buffalo Evening News, starting on 21 April 1913.

Thanks Mark, we'll push that start back another week.