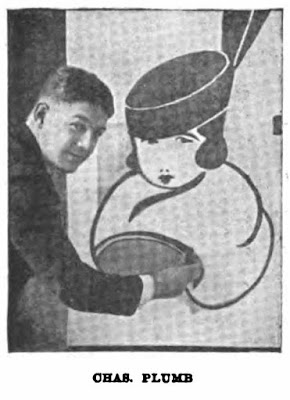 Charles Parsons Plumb was born on November 13, 1899, in Gardiner, New Mexico according to his World War II draft card. Plumb’s World War I draft card had the same date and full name.

In the 1900 U.S. Federal Census, Plumb was the only child of Carl and Mary. His father was a mining engineer. The trio lived in Gardiner.

The Plumb family numbered six in the 1910 census and were residents in Joplin, Missouri at 319 North Pearl Street.

In the 1918 University of Missouri yearbook, Savitar, Plumb was a freshman yearbook assistant and Kappa Sigma pledge.

On September 6, 1918, Plumb signed his World War I draft card. His home address was the Miners Bank Building in Joplin. He was described as medium height and build with brown eyes and hair. Plumb said he was a student. Sometime later he dropped out of school.

According to the 1920 census, cartoonist Plumb lived with his parents, siblings and maternal grandmother, Lucina Parsons, in Joplin at 1131 Florida Street.

Plumb was featured in the two-page Federal School advertisement in Cartoons Magazine, February 1921. Plumb was included in Chalk Talk and Crayon Presentation: A Handbook of Practice and Performance in Pictorial Expression of Ideas (1922).

Plumb’s marriage was reported in the Joplin Globe, November 16, 1921.


Joplin friends of Charles Parsons Plumb of Chicago, formerly of this city, will be Interested to learn of his marriage Monday afternoon, November 15, at 4:30 o’clock in Hyde Park Methodist church, Chicago, to Miss Rachel Griffith of Vincennes, Ind. The bride was a house guest of Mrs. C. H. Plumb in Joplin some time ago.
Mr. Plumb is the son of Mr. and Mrs. C. H. Plumb of Chicago, former residents of Joplin, and who are well known here. He is cartoonist for the American Farm Bureau Federation, with headquarters in Chicago. After the wedding ceremony, which was witnessed by the immediate families and a few intimate friends, the bride’s father, Dr. Griffith of Vincennes, Ind., was host at a wedding dinner at a hotel. The couple left Tuesday morning for a wedding trip to Atlanta, Ga., where Mr. Plumb will attend the annual convention of the farm bureau federation. They will be at home to their friends on their return to Chicago.


Announcement has been received here of the marriage of Charles Parsons Plumb and Miss Rachel Grace Griffith in Chicago, November 14. Mr. Plumb is a former resident of Baxter [Kansas] and is the son of Mr. and Mrs. Carl Plumb. They will reside in Chicago.


Charles P. Plumb, the artist, was born in Gardner [sic], New Mexico, reared in Colorado and Missouri, and when he grew to college man’s estate went to the University of Missouri. Later he attended the Chicago Academy of Fine Arts. He traveled and swung a pencil before audiences in the Chautauqua circuits, and later drew front page cartoons for a Chicago dally newspaper. He also produced syndicated cartoons for a national farm organization.

From these he went to animated cartoons, after moving to Pasadena, California, in 1923; then spent two years as a cartoonist on the Los Angeles Times and art editor of the Times Preview magazine. In Mr. Plumb’s own words, also, it is divulged: “Married. Two. One of each. Specially admires work of N. Y. Wyeth, Bateman, Arthur Rackham, and Edmund Dulac. Hobbies, fishing and rocking the baby, but too busy drawing Ella [Cinders] to do either. Ambition, to invent blotless ink and a three-speed-roller-bearing drawing pen. Favorite nightmare, the dead-line.”

American Newspaper Comics (2012) said Plumb drew the Ella Cinders daily from June 1, 1925 to May 13, 1950, and the Sunday from September 19, 1926 to May 9, 1943. Plumb had assistants including Roger Armstrong, Jack McGuire, Hardie Gramatky and Joe Messerli. Bill Conselman was the initial writer followed by Fred Fox and Conselman’s son. Plumb also wrote the Tarzan Sunday pages from February 10, 1946 to August 3, 1947.

San Gabriel, California was Plumb’s home in the 1930 census. His house, at 132 Live Oak Avenue, was valued at $40,000. The newspaper cartoonist had two children and a servant. The following year, a third child was born.

The whole family vacationed in Hawaii. They departed Los Angeles on January 12, 1934 and arrived in Honolulu on February 17. They started their journey home on March 10 and landed on the mainland the seventeenth.

Plumb and Charles Stuart Ramsay collaborated on the book, Tin Can Island: A Story of Tonga and the Swimming Mail Man of the South Seas. It was published in 1938.

The 1940 census said syndicate cartoonist Plumb had remarried. He and wife Josephine had a two-year-old son named Peter. Plumb’s household included his mother-in-law, sister-in-law and a servant. They lived in San Antonio, Texas at 1202 West Mulberry. Plumb was a San Antonio resident when he signed his World War II draft card on September 15, 1942.

A 1945 issue of Caduceus, published by the Kappa Sigma fraternity, noted Plumb’s whereabouts and activities, “Cartoonist Charles P. Plumb (Missouri) of Progresso, Texas, is remembered as co-creator of the comic strip ‘Ella Cinders,’ done when he was a correspondent for United Press. He is in Hawaii as a Red Cross assistant field director. Mrs. Plumb lives at 1010 W. Craig, San Antonio, while their son, Charles C, is in the navy in the Pacific.”

A military manifest card said Plumb was a Red Cross worker whose home address was 251 Cornell Street in San Antonio. Plumb flew on a B-29 from Hawaii on August 22, 1945, bound for San Francisco.

Plumb’s third marriage was to Martha Louise Wright. News of the event appeared in the Ogden Standard-Examiner (Utah), September 6, 1970.


Sep 6, 1970—Announcement is made of the marriage on Aug. 7th of the former Mrs. Martha Robeson Wright, formerly of Ft. Myers, Fla., to Charles Parsons Plumb, also of Ft. Myers. The couple exchanged vows in the presence of immediate family members, and after a trip to St. Augustine Beach, Silver Springs and Clearwater, Fla., the couple is at home at 1925 Virginia Ave., Ft. Myers. Mr. Plumb was creator of the cartoon Ella Cinders, for 30 years, and is the author of short stories of adventure.

Plumb passed away January 19, 1982 according to the Huntsville Times (Alabama), January 21, 1982, which published the Associated Press article.


‘Ella Cinders’ Creator Is Dead
Ashland, Ore. (AP)—Charles P. Plumb, creator of the comic strip “Ella Cinders” which was popular during the 1930s, has died in a rest home at the age of 82.

His strip ran for 27 years, ending in 1951. A popular newspaper and comic book feature which hit its peak of popularity in the 1930s, it was the first comic strip to be made into a full-length motion picture.

Plumb, who died Tuesday [January 19], also was the author of three books: “Tin Can Island,” {The Tattooed Gun Hand,” and “The Murderous Move.”

His wife, Martha Wright Plumb, said he had been ill for the last several weeks.