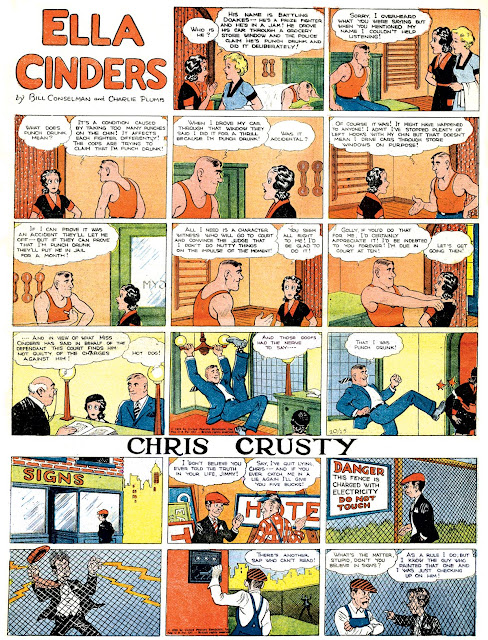 The long-running and popular strip Ella Cinders was quite economical about toppers. Through the entire long lifespan of the strip, it used only one --- Chris Crusty.

Ella Cinders combined comedy, melodrama and adventure in a strip that did all three quite well. Although mostly forgotten today, in its heyday it was very popular, on a par with many blockbuster strips of the day. In later years the strip's reputation was tarnished by second-rate writers and artists, some credited, some not. However, when writer Bill Conselman and artist Charlie Plumb were at the helm it was a delight to read and very well-drawn to boot.

The strip sold very well as a daily and so a Sunday was added after fifteen months, on September 19 1926.  The syndicate, Metropolitan Newspapers, had never syndicated a Sunday page and so Ella Cinders became their first foray into that arena. Such was the reader response to Ella, though, that the Sunday sold well right out of the gate. The Sunday didn't in my opinion have nearly the same magic as the daily, but I must be in the minority, because the Sunday sales were very strong and stayed that way.

Being new to the Sunday game, Metropolitan didn't clue into the topper craze. It took half a decade before Ella Cinders would gain her one and only topper on July 5 1931. Chris Crusty got a rousing introduction onto the Sunday page:

but that was the highlight of the entire run of the strip. After this intro strip, the feature consistently used the star as a mannequin on which to hang the week's jokebook gag. There was no continuity to his character or surroundings. Eventually the strip was demoted from two tiers to one tier, then to two panels vying for room alongside Ella Cinders' logo. Finally on July 6 1941*, exactly a decade after its debut, Chris Crusty's swan song was sung and Ella graced the Sunday funnies all by her lonesome for the rest of the long run of the strip.

Comments:
1926 was also the year Colleen Moore -- then a major star -- starred in a movie version of Ella Cinders, which is probably better known that the strip at this point. Harry Langdon, briefly a rival to Chaplin and Keaton, has a cameo.

The story has Ella winning a contest and going to Hollywood, which evidently mirrors the early days of the strip itself. It's still entertaining, although a few period bits date badly.

The film, one of the few Moore features to survive tragic mishandling, is public domain and there are various DVD releases as well as online videos. All seem to run about 52 minutes -- perhaps copied from a condensed version for Kodak's Kodascope lending library, which offered silent films for home projector owners.

Ella Cinders was probably the first strip launched the way (more) modern ones were, with a big promotional campaign beforehand, with`licensing arrangements made in advance. She had a song, dolls,and the movie appearing a few weeks to months after the strip began. According to IMDb, the film rights were secured by First National in January 1926,,and this one hit movie screens just short of a year from the strip's debut. I liked the strip, at least in it's early years. It was nicely drawn and had humourous, slangy dialogue, though given to the always-annoying PUNS. It became bad, or at least undistinguished when they made it into a dreary, verbose soap opera about Ella and her boring husband, "Patches", (who appeared to be a caricature of Antonio Moreno) and how events always kept them apart, from their unconsumated marriage in 1937 on. The film didn't strictly adhere to the strip's first story, though it seems like the two were created together. in the film, she makes it in Hollywood, and hometown iceman/sweetie "Waite Lifter" (the level of punmanship Conselman could reach) comes out there and marries her. He's played by the handsome he-man Lloyd Hughes. In the strip, Mr. Lifter was a thick, cypher-eyed grotesque that is left behind long ago. And obviously, Ella doesn't become a film star either. Fritzi Ritz went out there to be in the movies too, and I'm still waiting for her movie to come out. Fun Fact: one 1927 Ella Sunday was drawn by Clifford McBride.