Obscurity of the Day: Coon Hollow Folks, with a side dish of Bear Creek Folks 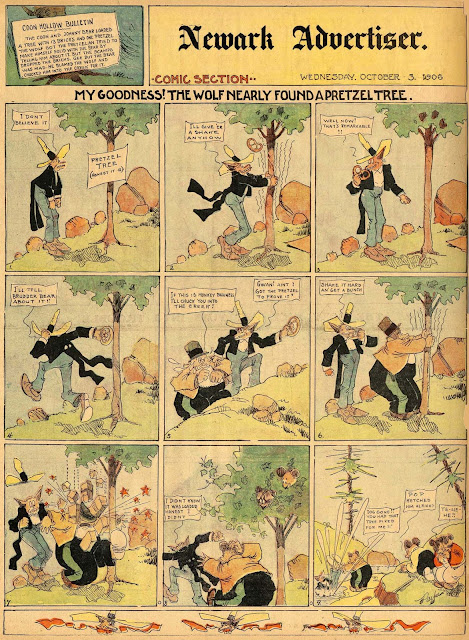 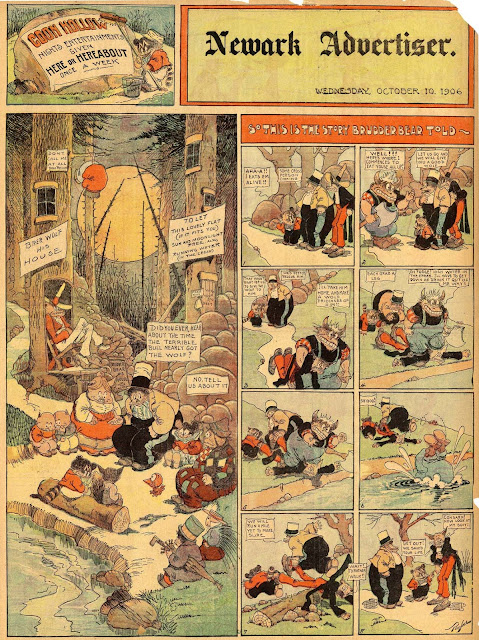 It took a lot of searching around to figure out this messy little story, but I think I've finally unravelled the  most of it. The first clue came from good ol' Cole Johnson, who sent me the above two sample strips quite a long time ago. He made no mention of the fact that these strips bore that fabled name, because he was much more interested at the time in the fact that the Newark Advertiser was running a second set of color comics in their Wednesday papers of 1906 as a circulation stunt.

At the time I assumed that these were Bear Creek strips that for some reason were renamed for syndication by the Inquirer. It wasn't until many moons later, and unfortunately long after Cole could help to shed light on the mystery, that I finally did some due diligence on these strips. I searched through the online archives of the Philadelphia Inquirer just to see when these strips ran there, and if in fact the names had been changed. To my surprise, I found no Bear Creek strips that matched these, and in fact I realized when looking for the matches that the Inky never ran Bear Creek as a full, only a half. So where the heck did these full page strips originate? Did the Inquirer commission them separately?

However, I must have rubbed my rabbit's foot just right because I was in luck. In the period 1906-1908, many Sunday sections of the Pittsburgh Gazette-Times were filmed, and glory be but what did I find there but C.M. Payne's Coon Hollow Folks! The microfilmer stopped filming the Sunday comics on November 15 1908 when the strip was still running, but my guess is that it didn't run much longer after that. Payne by that time had actually stopped taking credit on the strip, signing himself "Coon" (complete with quotation marks) starting on February 2 1908, and in years hence he would say that he stopped doing the strip in 1907. Evidently he was moonlighting from some other job to continue this series. I know that in 1909 he had work appearing in the Philadelphia Inquirer and New York World, so presumably Coon Hollow Folks was very close to ending by then.

That leaves a big question. Why did the Philadelphia Inquirer start running a strip late in 1904 that was an outright copy of Coon Hollow Folks, complete to the characters and their names?  One could say that both strips are outright rip-offs of the Uncle Remus Stories of Joel Chandler Harris, right down to the use of the term Br'er, often used in reference to each of the animals. While that's true, why use the exact same animals, the exact same names, and the exact same art style?

The answer may well be that Payne himself managed to sell the Inquirer on the idea of running a doppelganger strip, because it is commonly said that Payne was the artist on the Inquirer strip at the beginning (late 1904). The Inquirer wasn't above being a copycat, because they already had Harold Knerr penning a copy of Katzenjammer Kids (as Fineheimer Twins).

The problem is that the early Bear Creek Folks strips are unsigned, and in a style that could be produced by any number of Inquirer cartoonists -- R. Edward Shellcope, William F. Marriner, Sidney Smith and Jack Gallagher could all handle that style with -- at least to my eyes -- darn little difference to discern who is who. In fact, as part of readying this post, I made a close study of the Inquirer strip of 1904-05, and I actually did find a few signed with a single initial -- K. Was it Knerr who produced both the Katzies rip-off and the Coon Hollow ripoff? Did it have nothing to do with Payne at all?

I'm not nearly good enough as an art spotter to tell, but just in case you, dear reader, are gifted in that respect, here's a couple early Bear Creek Folks, one signed K, to consider. Sorry for the low quality but these are from online microfilm sources:


PS: To make an already long post even longer, I wish to commemorate a small landmark in my research. When American Newspaper Comics: An Encyclopedic Reference Guide was published, my count of newspaper comic series documented therein was 7012. With the addition of Coon Hollow Folks added to the ranks of documented series, my meter clicked over to 7500, the first real nice round number I've hit since then. Congratulations to me!

Comments:
Hello Allan-
Are you saying you think the Coon Hollow strips were syndicated by the Pittsburg Gazette Times? Or Payne self-syndicated?
It might be that Payne owned the characters and Bear Creek Folks was the same strip with a new name so that the Inky could have something they could own and control.
The Newark Advertiser ran a WCP section on Sunday, and the Wednesday one was McClure, so is this a McClure series, or maybe they were doing a syndication arrangement with Payne, or the Pittsburg G-T who might own it.

Looks like a different artist to me. Might well be Knerr. Do you have any zoo-illogical snapshots we can compare against?

Hi Mark --
There is good evidence that Payne was working for the Pittsburgh G-T at the time the feature debuted -- there are several write-ups in the paper about him being a staff member. Now as far as actually syndicating the material, it could be that the G-T or Payne sold the strip to McClure for syndication, or they could have syndicated it themselves. Since McClure sections are in plentiful supply, yet this strip is rarely seen, I'm going with the G-T as my best guess. One thing I can say for sure is that the Coon Hollow and Bear Creek material, though so very similar, does not overlap as I was lucky enough to be able to compare both series in the early years. All the strips I reviewed were different between the two series.

Daniel --
FZor your art-comparing pleasure I'd suggest looking at this post:

Where you'll find signed Knerr work from very close to the time when the Inky strip debuted.

I've just found a few pages of photocopies made from THE SAN ANTONIO LIGHT microfilm, one shows the comic section of 16 Sept. 1906 another that of 14 October 1906. I'm sure they were made for a reason. They're both McClure sections, but the October one features the Coon Hollow "Pretzel Tree" episode seen above. That the Newark section is 11 days earlier, could it be the debut McClure Payne strip?