Obscurity of the Day: The Jug Jugs 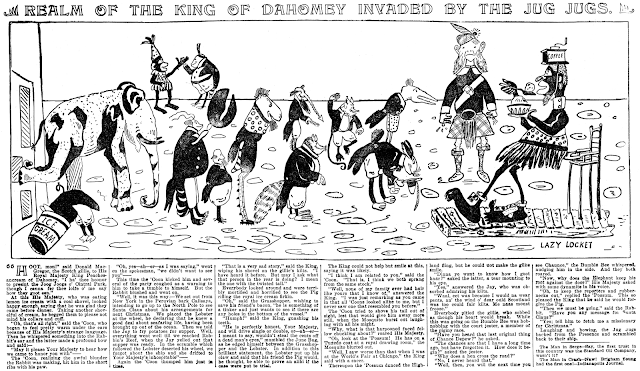 The Jug Jugs are a group of animals who leave the Central Park Zoo to see the world. Some are bona fide zoo animals, while others, like the mosquito, maybe not so much. The species of the animals are no means obvious since the art is wretchedly awful. The text stories that accompany the art, though, are really quite glorious.

The Jug Jugs appeared in the New York Herald in 1899. I don't have complete information on their run. The earliest one I've found (above) is from the August 6 issue, and the text makes it obvious that it is not the first in the series. OSU's Bill Blackbeard collection documents three additional episodes, on September 3, September 10 and October 8. Based on the title of that last episode it appears to be the end of the series.

The author of The Jug Jugs signs him or herself Lazy Locket. This signature was all over the Herald's children's section from August to October 1899, and then disappears. I haven't a clue who this person really is. At first blush that seems small loss since the artwork is something that should be tacked up on a refrigerator by a doting parent, not published in a major newspaper. But the text story is another matter entirely. Although The Jug Jugs is certainly inspired by the work of Lewis Carroll, it is not just derivative hackwork. Based just upon this single episode, the only one I've seen, I say it is Literature with a capital L. I'd love to see more to find out if Mr. or Ms. Locket was able to sustain this level of writing, or if this episode was merely a flash of brilliance.

Comments:
The San Francisco Academy of Comic Art apparently has two Lazy Locket items in its collection. "Amusing Animalities Artful Artic [sic?] Aptly Illustrated" It's listed as a one-shot. They also have "The Jug Jugs Entertained by Santa Claus." Sounds to me like you might have a shot at a comparison. Website here: http://ead.ohiolink.edu/xtf-ead/view?docId=ead/xOhCoUCR0001.xml;chunk.id=new_york_herald;brand=default;query=editorial and look for Series II, comic sections, New York Herald.

EOCostello -- Not sure I understand your comment. The post states that I found three Jug Jugs installments in the Blackbeard collection and gives their dates. I did not count "Amusing Animalities..." because there is no definite tie to this series based on the title alone. --Allan