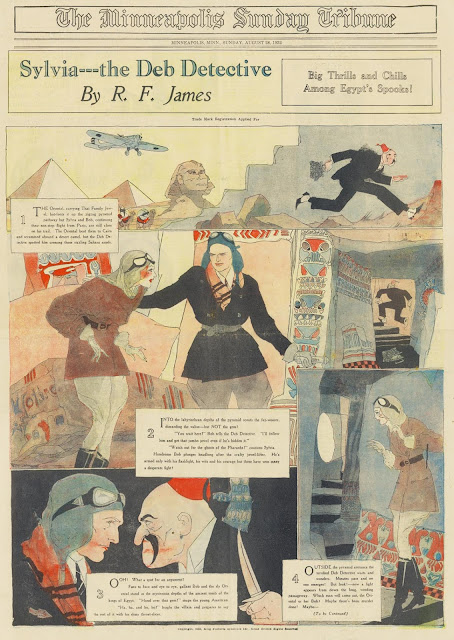 After our big project of Hearst magazine cover indexing back in January, here finally we're covering one of those series. This one is Sylvia the Deb Detective, by R.F. James. I'll spare you from going back to the index and tell you that the series ran from June 5 to October 23 1932.

This wacky series begins with a rich debutante who is just about to appear at her coming out party. Her doting papa has given her an extravagant present for the occasion, an enormous jewel. Dressing for the party, she discovers that the jewel has been stolen.

Sylvia Ritzmore, the rich deb, decides that rather than call the cops or a private dick, she will play detective and find that priceless jewel herself. Apparently this is just fine with Mama and Papa, and she proceeds to drag her boyfriend Hugh off to help her find the rock.

The fast-paced story follows Sylvia all over the world, always just one step behind the jewel thieves. Poor Hugh gets left behind after awhile, though Sylvia hardly seems to notice. No problem, she just picks up another handsome beau, Bob, a few installments later. He's better anyway because he's a flier, and they have a lot of travelling to do.

After lots of adventure and intrigue, Sylvia recovers not only her jewel, but a whole treasure trove of additional sparklers, making her even richer than she was. In the final installment  (spoiler alert!) Bob proposes to the Deb Detective and Everyone Lives Happily Ever After.

Comments:
I have this on R. F. James: In 1905, he worked for the Chicago Journal and served as the Vice-President of the Newspaper Cartoonists and Artists’ Association. From: Newspaper Cartoonists’ and Artists’ Association, First Annual Exhibit. Chicago: Art Institute, May 1905. Viewed online: http://www.artic.edu/sites/default/files/libraries/pubs/1905/AIC1905Nwsppr1stAn_comb.pdf , 01/03/2015